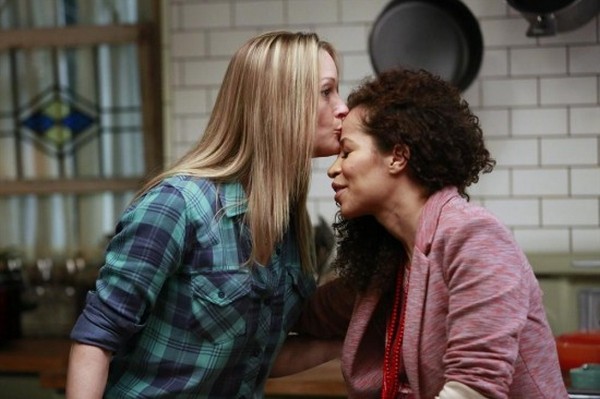 Tonight on ABC Family their hit drama The Fosters returns with a new episode called “Mother.” On tonight’s episode, a medical issue concerning Lena’s pregnancy arises. Meanwhile, Wyatt turns to Brandon for advice; Mike tells Stef why he was at the halfway house on the night Ana vanished; and Mariana remains angry at Jesus for putting her in an awkward position.

On the last episode Callie fretted about the anxiety her recent decisions had caused Jude. Emma second-guessed her breakup with Jesus, putting him in an awkward position with a new love interest and with Mariana, who became unwillingly involved in his dilemma. Stef struggled with her suspicions about Mike and debated moving forward with her investigation into Ana’s disappearance. When Brandon’s band mates took him on a hike for some “special” inspiration, Brandon opened up to an unexpected confidant about his past transgressions. And Callie’s emotions got the better of her when things got hot and heavy with Wyatt. Did you watch the last episode? If you missed it we have a full and detailed recap, right here for you.

On tonight’s episode tragedy strikes the Fosters and they must look to each other for strength. Stef confronts Mike about Ana, and he comes clean about why he was at the halfway house the night of Ana’s disappearance. Meanwhile, Wyatt seeks relationship advice from a very uncomfortable Brandon, and Mariana is still furious with Jesus for putting her in the middle of his girl problems. The episode was written by Joanna Johnson and directed by Lee Rose.

Mike is Ana’s sober coach. He’s paying for her motel room and doing his best to keep her clean but after Stef confronted him she also had to warn him about how stupid he was being. If anyone else were to find out then this (all of his good Samaritan work) would look like witness tampering. And nevermind what Ana’s done to them personally – what about their son, Brandon. Anna was prepared to ruin his life just to get some extra money to feed her habit.

So finding out that Mike wants to help this has come as a shock. Though Stef didn’t have a chance to stick around and keep fighting with a very stubborn Mike. Her kids called – Lean had been rushed to the hospital.

Both Lena and the baby are currently doing fine but the doctor has warned the expectant mother to take it easy. And she’s trying to do just that however she’s also a mother to a set of twins that have been nonstop bickering. The twins couldn’t even side table their fight while their mother was sick.

The moms had asked Jesus to sell their bed (and wedding present) for them. It’s never suited them and they just want to get rid of it. But Mariana was upset that she wasn’t asked to sell the bed. So Lena suggested they sell the bed together. Although selling a piece of furniture as it turns out takes more than salesmanship. The first few costumers that stopped by the house were very upset (well the wife was and the husband wasn’t) when they learned the original owners are lesbians.

It took a while for the wife to get over that and unfortunately by time she did – her husband no longer wanted to buy the bed and Stef hadn’t wanted to only sell half. So they walked and Jesus’s first attempt at earning his commission was a failure.

Mike and Dani later stopped by the house with food for the family. They had wanted to support Lena and Stef during this trying time but Lena found it hard keeping Brandon’s secret when Mike admitted he and his girlfriend have been talking about trying for a baby.

In the end she chose to stay silent though she did inform Brandon about his father. Mike wants to start fresh and for the first time he thinks he can. Since his last lapse, he’s been staying clean. Because like Stef, he too thought he did something to Ana. He was so strung out that when he awoke to find blood on his hands – he thought it was Ana’s. So it was relief for him to have found her alive and in some crack house.

That’s why he’s been helping her. Just the thought alone that might have he killed her was enough to frighten him. It scare him so bad that he can’t even think about ever taking a drink again.

He told Stef everything. He wanted her to know how bad it had gotten for him. And that’s also why the chance of starting over appeals so much. He knew he wasn’t as good of a father as his son needed him to be. But he’s not smart enough to figure out that maybe he should start trying to change that now.

Lena told Stef about Brandon’s drug use and Stef wasn’t all that upset. Sure, she made her son swear to stay away from that and alcohol but she felt he suffered already with his freak-out. Stef had had the same when she tried pot. So she’s a lot more forgiving than she would normally be and as long as Brandon stays clean and none of school work suffers then he gets to get off lightly this time.

And, funnily, Stef ended up selling the bed herself. Marianna and Jesus were finally working together but they didn’t seem able to make a sale. So Stef stepped in and she haggled with an older until they were both ready to make a deal. Though she did let the kids keeps their commission because it wasn’t like they weren’t trying.

Everything in the house was fine for a while and then by the next day – Lena was rushed to the hospital. She was diagnosed with preeclampsia and the doctor advised her to have a c-section. Lena didn’t want to go through that seeing as at 20 weeks the baby wouldn’t be able to survive outside of the womb. But she couldn’t hold onto the baby without risking her own health so she had to let go.

Lena thought having a biological baby would mean that this child will always love her unlike the other children that could decide one day that this woman isn’t my real mother. Yet Lean’s own mother had to tell her that motherhood doesn’t work like that. As their mother, you will always love your children more than they love you. Blood won’t change that!

Waiting for news about Lena, has forced the kids to face some of their demons. Brandon had gone to Callie to talk about why she was pulling away from Wyatt. Wyatt was so sacred that he actually went to Brandon for advice earlier so Brandon told Callie to do what she did to him to Wyatt. She can’t keep shutting people out when she’s scared.

So Callie told Wyatt everything and he understood. He wants to wait until she’s ready and he’s not going to push the issue. And Callie finally reached Jude. All it took her was for her to be there for him and slowly it got to start talking again.

The family planted a tree in honor of the sister they lost. They wanted a way to remember her always!