BY Joanna Mazewski on July 7, 2014 | Comments: one comment
Related : Recap, Television, The Fosters 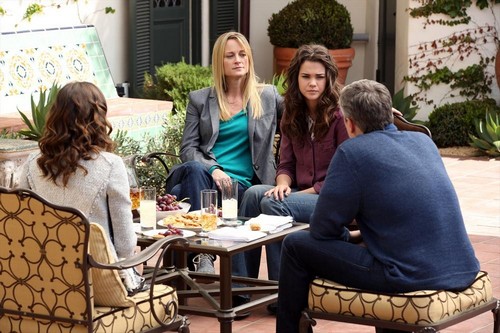 Tonight on ABC Family their hit drama The Fosters returns with a new episode called “Say Something.” On tonight’s episode Callie sets out to remove the barriers to her adoption. Meanwhile, Lena applies for a promotion at work; Mariana is displeased when she learns why she made the dance team; and Callie’s not sure if she’s ready for her relationship with Wyatt to progress.

On the last episode Stef and Lena went on a babymoon, leaving Brandon and Callie in charge of the house. Brandon’s bandmates pressured him into having a few friends over to hear their new sound, but when Mariana and Jesus found out, the night turned into an all-out rager. Determined to follow Stef and Lena’s rules, Callie tried to police the party but failed miserably. Jude found himself in an awkward game of spin the bottle. Meanwhile, Lena tried to reconnect with Stef, who was finding it hard to relax on their weekend getaway. The episode was written by Thomas Higgins and directed by Martha Mitchell. Did you watch the last episode? We recapped it all right here for you.

On tonight’s episode Callie makes an important decision to address the hold-up in her adoption face on, but Jude may be more affected by her choice than he lets show. Things heat up between Callie and Wyatt, but Callie realizes she may not be emotionally ready to take the next step. Lena vies for the Principal’s job at Anchor Beach, which causes some friction in her already rocky relationship with Timothy. When the dance team holds auditions for a new member, Mariana questions why she was chosen to join the team, and she doesn’t like the answer. The episode, titled “Say Something,” was written by Kathleen McGhee-Anderson and directed by Zetna Fuentes.

The secret is out. Lena accidentally let it slip that the siblings were going to be welcoming a sister soon. It all came out after the kids were helping to clean out the garage and Lena asked if they should keep some of the things for when “she” comes along.

And the kids are excited. Especially Mariana who’s probably already thinking of all the cute outfits she’ll put her sister in. But the baby won’t be exclusively hers or for that matter her moms. The sperm donor, Timothy, has talked to his lawyer and that fact he went looking for one means he just doesn’t want to be known as the sperm donor

Though his timing is impeccable. Stef pointed out to Lena that Timothy dropped the lawyer on them right before her big interview for that new and better job. Sort of like it was his way of saying he has something she wants and they have something he wants!

And he did come for her during the interview. He brought up her cutting programs and even dared to ask her how her pregnancy will plan out with a new job. Pretty sure that’s illegal and Lena definitely had a few words for him afterwards.

After the party the kids threw last week, a lot of things have changed at school. Jesus, for one, is ignoring his girlfriend in favor of eyeing his drunken hook-up, Hayley. Like Hayley is supposed to know what that means.

Sure, they had a good time at the party but Jesus never called her back even though he swore he would. And so when in doubt turn to his twin sister for an uncomfortable conversation. Hayley asked Mariana what was Jesus’s deal and though Mariana doesn’t know – she’s going to find out.

She corned Jesus and made him call Hayley. This wasn’t going to be like another Lexi situation where he dates her friend and then break said friend’s heart.

As for Callie, she’s struggling with the letter her birth father dropped off. It was one thing to say she didn’t want anything to do with him and quite another to miss out on meeting her sister. However, before she could make a decision, she had to check in with her brother. Jude had to know that he wasn’t going to be replaced with someone else. And Jude understood that. He knows that nothing was going to come between him and Callie.

It’s not like Callie will turn her back on him over something as of yet undefined. Although that’s what Jude’s friend did when the other’s boy suspect Jude might be gay.

So Callie agreed to meet her sister and she brought Stef with her as support. Unlike her, her sister has never been allowed to get into trouble and she’s grown up as a pampered princess. A princess with a very protective mother that is.

Sophia’s mother doesn’t like to be reminded about her husband ex. Nor does she likes the way her daughter is so quick to please her new sister. Sophia is obviously seeking a connection. One that can hopefully last longer than her parents expect and from all appearances Callie is right there with her.

Her sister is sweet and she doesn’t want to hurt her by saying anything wrong. Which is why Stef glossed over Callie’s time in juvie and what led her there.

But the girls’ father is having a hard time letting go of the past. He still harbors feelings for Callie’s mother and went as far to admit to Stef that if his family hadn’t intervened then he would have stayed with her. Unfortunately, his wife overheard the last part so she’ll probably put an end to the shopping trip Sophia and Callie are planning.

Mariana nearly got into trouble with the dance team. They were looking for a new member to join and she voted for the captain of their team’s friend when not even the captain voted for her friend.

Mariana said she did it to curry favor when really she just didn’t want the black girl to join the team. She figured there was already one girl hired because of her skin color, namely herself, and that she shouldn’t risk her own position by bringing a second. And Hayley covered for her.

Hayley wants Jesus and she smart enough to realize the best way to get to him is through his sister. And her plan worked. Mariana arranged for her to come over to the house and soon the new couple were at it. Which left Mariana in the uncomfortable position of having to turn away Emma.

But Mariana never had to worry about losing her position. No, the dance team chose her because her mom was the acting principle. In order for them to save their funding they accepted her daughter onto their squad. And now that Lena missed out on permanently becoming the principle – Mariana has to work harder than ever.

It’s been a long day and yet it wasn’t over. Stef changed her mind about Timothy and Callie’s biological father helped. She realized that just because they were going to be parents to the baby doesn’t mean that Timothy won’t have a part to play in their family. Stef is willing to let their baby have an “uncle”.

Callie returned from the trip with her mind made up as well. She knew that she should let go of Brandon and finally commit herself to Wyatt but she barely had time to bask in being a love sick teenager – there was something off with Jude and no one in his family noticed until they got a call from his teacher.

Jude hasn’t spoken to anyone in the last couple of days!