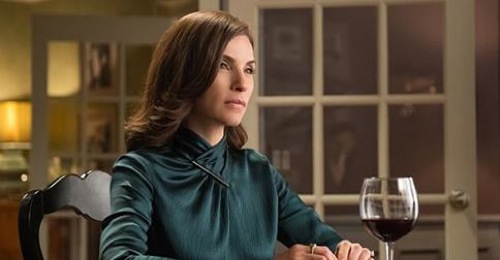 On last week’s episode, Cary’s freedom was in the hands of his pretrial service officer, Joy Grubick, as she interviewed his colleagues to determine whether or not he should remain behind bars. Meanwhile, Alicia and Dean found themselves in unfamiliar territory when a client’s case ended up in Christian Arbitration. Did you watch the last episode? If you missed it, we have a full and detailed recap right here for you.

On tonight’s episode when Alicia agrees to further explore the option of running for State’s Attorney, Eli brings a respected campaign manager into the fold to help her decide once and for all.

Tonight’s season 6 episode 4 looks like it is going to be great and we’ll be updating it live for you beginning 9PM EST.

Tonight’s episode of The Good Wife begins with Alicia Florrick at home drinking wine and watching TV, Eli arrives at her door and she invites him in and pours him a drink and herself a bigger drink. She confesses she is nervous. Eli informs her that if she is going to run for state’s attorney, they have to announce her candidacy in four days. But, according to the polls, if Alicia runs for state’s attorney she will beat Castro by 8 points. Alicia is still skeptical though, because she is afraid that Castro is going to dig up dirt on her and her clients. The doorbell rings, and Eli announces that it is her new campaign manager Johnny. He tells her that if she doesn’t like him, they can find another manager.

Alicia answers the door and Johnny appears shocked to see her. He demands that Eli talks to him in the hallway. They shut the door and he rants to Eli that he set him up, and he doesn’t want to manage her campaign. Eli convinces Johnny to give it a shot and they head back inside and sit down with Alicia. Johnny demands to know why Alicia is running, she explains that she is tired of Castro’s corruption. He points out that when her husband was a state’s attorney he was corrupt. They are interrupted by a phone call, Diane tells her that they have an issue and the court has subpoenaed Bishop’s real estate documents.

Alicia hangs up on Diane and Cary and Johnny begins questioning her again, he agrees to be her campaign manager. Eli and Johnny give Alicia her opposition folder, and reveal that it is all of her dirty secrets and skeletons in her closet that Castro might try to use against her. They explain to her that Castro is going to point out that she represents criminals at her law firm, and they tell her that she has to drop Bishop. Next, they tell her that her son got his sixteen year old girlfriend Nisa pregnant last year and she got an abortion. Alicia is floored, she had no idea that Zach went and got an abortion. She calls Peter freaking out and tells him that they are cutting Zach off and he isn’t getting another cent, he can pay his own way through college.

Peter hangs up on Alicia and calls Eli, he can’t believe he told Alicia about Zach’s abortion. Apparently Peter knew all along, Alicia catches Eli on the phone and knows that it is Peter and he knew about it the whole time. They sit back down and Johnny warns her that there are some issues with her brother Owen and her mother. Apparently her brother has been having an affair with a married man who does gay porn. Alicia needs to talk to her brother and tell him to lay low for a while. Alicia’s mother Veronica was videotaped in a store spanking a five year old child that she doesn’t know.

Now it is time for them to discuss Alicia’s secrets that could be used against her by Castro. They show her photographs of Will and Flynn both leaving her apartment in the wee hours of the morning. Alicia points out that Will is dead and can’t substantiate their relationship. She agrees to talk to Flynn and make sure he doesn’t plan to screw her over. Johnny starts to go over her relationship with Peter, but Eli says they can save it for another day. Alicia says she already known about Peter’s affair with Kalinda, but Eli tells her not to worry about, they’ll discuss it another day.

The next day Alicia and Diane sit down with Bishop and try to dump him. They explain that it is a conflict of interests for them to keep working together and it would be better for both parties if they went their separate ways. But, Bishop refuses and tells them that it isn’t an option. Meanwhile, ALicia is having lunch with Kalinda, apparently he had no idea that she had sex with Peter and he was the last to know. Kalinda reassures him that it won’t come up while Alicia is campaigning.

Afterwards Alicia meets Finn at a bar and warns him that she is running for state;s attorney and there is a picture of him leaving her apartment. They agree that they weren’t doing anything “naughty” and were just doing witness prep. He warns her that Castro is planning to “hit her where it hurts.” Alicia leaves the bar and as soon as she pulls out of the parking lot a police officer pulls her over. He doesn’t even ask for her ID and knows who she is, he demands to know if she has been drinking.

Alicia gets out of her car and has to do a sobriety test. She passes because she only had one glass of wine. She gets back in her car and calls Eli and tells him that she was just set up, he reassures her that he will keep an eye out on the blogs.

Kalinda is heading home in the dark, and she finds Bishop waiting for her in front of her apartment. He orders her to get in the car, and demands to know why her firm was trying to drop him as a client. Kalinda insists she had no idea they were trying to drop him, but admits it might be because Alicia is considering running for state’s attorney.

Alicia, Johnny, and her mom meet with Greg and his mother, the little boy that she spanked at the store. Greg’s mom demands $50,000 and says that she won’t sue them if they pay up. Alicia laughs and says they aren’t paying her $50,000.

Alicia heads home and her daughter shows her a website someone set up announcing that she is running for state’s attorney and asking for donations, which is completely illegal. So far the website has raised $80,000. Alicia calls Eli in a panic, and Eli assures her he and Johnny had nothing to do with the website.

Johnny does some digging and finds out that a few minutes before Alicia’s mom spanked Greg, he tripped an 80 year old woman and kicked her and it is all on videotape. He shows the footage to Greg’s mom and says that the woman is threatening to sue. She agrees to keep quiet about Alicia’s mom spanking Greg.

Alicia heads out of the building and Bishop is waiting for her, he says that he has decided after all to go to another law firm. Then he tells her she is welcome for setting up the website that has raised over $100,000 for her campaign, Alicia is shocked.