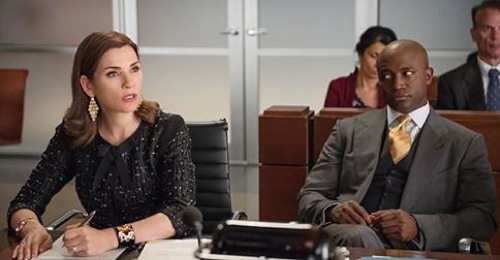 Tonight on CBS The Good Wife starring Julianna Margulies continues with an all new Sunday October 19, season 6 episode 5 called, “Shiny Objects”. On tonight’s episode, Alicia and Dean face familiar foes in Elsbeth Tascioni and Rayna Hecht when they represent a fired female CEO in a sex discrimination suit. Meanwhile, the Florrick/Agos/Lockhart firm are in panic mode when a hacker seizes control of their files and threatens to delete them if a ransom demand isn’t met.

On last week’s episode, when Alicia agreed to further explore the option of running for State’s Attorney, Eli brought a respected campaign manager into the fold to help her decide once and for all. Did you watch the last episode? If you missed it, we have a full and detailed recap right here for you.

On tonight’s episode when Alicia and Dean represent a fired female CEO in a sex discrimination suit against her company, they face a tough defense team in familiar foes Elsbeth Tascioni and Rayna Hecht. Meanwhile, a hacker seizes control and threatens to delete all of Florrick/Agos/Lockhart’s files, sending the firm into panic mode when he demands a ransom.

Tonight’s season 6 episode 5 looks like it is going to be great and we’ll be updating it live for you beginning 9PM EST.

Tonight’s episode of The Good Wife kicks off with Alicia arriving at court, and is shocked to see that her opposing council is Elizabeth Tassioni. Alicia’s client Camilla Vargas takes the stand, she’s suing her boss because he fired her because she is a woman. The defense points out that Ms. Vargas is difficult to work with and fired five assistants in the last two months.

Alicia heads back to her office and all hell breaks loose, Diane opens an email and it turns out to be a virus. All of the computers in the office shut down, and they receive a message telling them to wire $50,000 to an offshore account in 72 hours or else all of their files will be deleted. Alicia freaks out because they are due in court and can’t access any of their case files. She decides that they need to pay up, and each partner will have to fork over $5000 to pay the ransom.

Alicia heads back to court and Camilla Vargas’s boss takes the stand. Alicia points out that the company’s former CEO had sexual harassment charges filed against him and he didn’t get fired, instead he got a raise. But, Elizabeth takes the floor and points out that the boss was just being proactive because after the sexual harassment suit they didn’t want any more issues with the next CEO.

Diane and the other partners wire the money to the account, and they receive a pin number in her email that is supposed to unlock their accounts. She types in the pin number and it still doesn’t work, so she puts Kalinda on the job and tells her to see what they can do.

Eli shows up at the office and is furious because Alicia hasn’t been returning his emails. He wants to go over her acceptance speech, he argues that she and Peter are the new power couple and she has to uninvited ASA Finn. Eli says that if Finn takes the stage to endorse her, then Peter is not going to come to the event.

Kalinda heads to the FBI office and says that her firm has been hit with Trojan Ware and she needs help getting their files back. The only problem is she only has 45 hours left before the files are deleted, and it will take 48 hours to get a warrant.

Diane finds a 1-800 number on the virus’s site and calls the help desk. They confirm that they received her payment of $50,000, but they sent the pin number to her email address at Lockhart & Gardiner. She asks them to send the pin number to her new email address, but they inform her that isn’t allowed. Diane calls David at Lockhart & Gardiner and asks him to forward the email, but he says there is no way that is going to happen after she abandoned them.

The FBI agent pulls some strings and brings Kalinda the IP address where the money was located. They head to the house of a man named Mr. Kellner and order him to open the door. An elderly old man opens the door and says that he has no idea what is going on. He says a man named Mr. Black emailed him and offered him a job. Money is wired to his account and he gets to keep 10% of it and then send the rest of the money to another account.

Diane heads to Lockhart & Gardiner to beg David for the pin number to get back her files that are being held ransom. David is holding her email ransom though, he says that the lease to their building is still in her name and they want it transferred over to their names. She agrees to discuss the lease with him and he hands over the email. She rushes back to the office and types the pin in to the virus, but it doesn’t unlock their files, instead the timer begins counting down twice as fast as before.

Kalinda has sex with Lana, the female FBI agent that is helping her, and she gives her the access codes from a proxy in Russia where the virus is being operated. Lana tries to talk to Kalinda about being gay, but Kalinda tells her she can’t have that conversation with her.

Alicia heads back to court with Camilla Vargas, the opposition argues that their client isn’t sexist but the Chinese company they were doing business with was sexist and refused to work with a woman so they had no choice but to let her go.

Back at court, Camilla’s case isn’t going well. Technically the company that fired Camilla wasn’t being sexist, it was it’s Chinese counterparts that didn’t want to work with a woman.

Kalinda hacks in to the Russian scammer’s webcam so she can video chat with him. She tells him to return their money and unlock their computers, and he laughs at her. She begins spamming his computer with anti-Putin propaganda and he caves and unlocks their files.

Alicia’s case with Camilla Vargas goes to hell when an attorney arrives and reveals that the company she is suing assets are frozen because they are being charged with theft of trade secrets. So, Camilla’s case in on hold until after the federal charges are decided.

Alicia heads to her speech where Peter, Eli, and her campaign manager are arguing over whether Peter and Finn will both endorse her. Peter refuses to share a stage with Finn, because he is just a measly district attorney. Alicia screams at Peter that she needs him now, but if he doesn’t help her then later on when he needs her she isn’t going to stand by his side. She storms out and tells Eli to do whatever he wants.

Diane is fed up with their office’s leaks and cockroaches. She announces to Alicia that she still technically owns the building where Lockhart & Gardiner is located, and she wants to kick David and the rest of the firm out and move Alicia’s firm in to that building.

It’s time for Alicia’s big speech to announce her candidacy for state’s attorney. Peter shows up at the last minute and shocks everyone and endorses his wife.