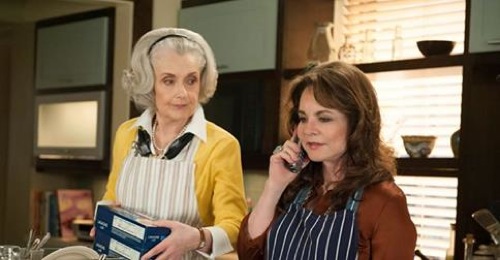 Tonight on CBS The Good Wife starring Julianna Margulies continues with an all new Sunday October 26, season 6 episode 6 called, “The Old Spice”. On tonight’s episode, Alicia [Julianna Margulies] and Elsbeth put their legal battle aside when the government brings economic espionage charges against both of their clients. Meanwhile, Diane [Christine Baranski] tries to move her new firm into the Lockhart/Gardner/Canning office space, which leads to a fight with her former partners David Lee and Louis Canning.

On last week’s episode, when Alicia and Dean represented a fired female CEO in a sex discrimination suit against her company, they faced a tough defense team in familiar foes Elsbeth Tascioni and Rayna Hecht. Meanwhile, a hacker seized control and threatened to delete all of Florrick/Agos/Lockhart’s files, sending the firm into panic mode when he demanded a ransom. Did you watch the last episode? If you missed it, we have a full and detailed recap right here for you.

On tonight’s episode Alicia and Elsbeth put their legal battle on hold when the government brings an economic espionage charge against both of their clients. Meanwhile, Diane sets her sights on moving Florrick/Agos/Lockhart into the Lockhart/Gardner/Canning office space, leading to a battle with her former partners David Lee and Louis Canning

Tonight’s season 6 episode 6 looks like it is going to be great and we’ll be updating it live for you beginning 9PM EST. While you wait for the recap, check out a sneak peek of tonight’s episode below!

Tonight’s episode of The Good Wife kicks off with Alicia’s campaign manager Elfman arguing with her about her religion.  She has gone on the books as an atheist, and he informs her she has to pick a religion and tell voters that she practices it or else she won’t win the election.

Alicia’s doorbell rings, and Eli’s daughter Marissa is standing on her doorstep.  She informs Alicia that she is her “bodywoman” and Eli sent her to stick to her life glue and be her personal assistant, and also spy on her and report back to Eli.  Alicia argues that she doesn’t need a body woman, but her campaign manager informs her that she does.  Elsbeth calls Alicia and wants to know why she didn’t show up at their FBI meeting, Alicia tells her that it was cancelled and rescheduled for tomorrow, and everyone else knew that.

David receives a letter from at work, and swears out loud when he learns that he and the remaining company is being evicted.  David and Canning decide to fight back, they call OSHA and get her in trouble for being a bad landlord, and send her a list of all of the repairs she has to make to meet code inspections, the list totals over $600,000.  When Diane receives the bill Kalinda points out that Canning has real estate property too, and probably has just as many OSHA problems as she does.

Alicia and Elsbeth head to court to question the FBI’s first witness, the code writer who created the app that is under fire at Jacer.  Alicia argues that the AUSA is not being up front about their intentions, and the FBI agent confesses that they actually would like to change their charges against Camilla Vargas to economic espionage.

Elfman and Marissa are helping Alicia prep for her speech tonight.  They want Alicia toile and say that she found Jesus after the court house shooting.  While they bicker over what Alicia should say, Alicia calls her daughter Grace to talk about religion.

Alicia and Elsbeth head back to court with Vargas, and the next witness takes the stand, Mr. Fong brokered the sale of the app between J-Serve and the Chinese company.  Alicia points out that Mr. Fong’s testimony is irrelevant because he already testified in their case last week that he intentionally left Mrs. Vargas out of the business deals and went over her head.

Diane and Kalinda head to Lockhart & Gardiner, and have all of the properties that Canning owns assessed.  He actually owes over a million dollars in OSHA repairs.  Canning and David agree to drop the OSHA charges, but they still aren’t giving the building back to Diane.  They found a clause in her agreement which dictates that if she left the property she forfit her rights of ownership, and she left four months ago when she went to Alicia’s firm.

Cary is partying at a bar full of law students.  He gets drunk and brags to all the girls there that he was arrested, which apparently is a huge turn on.  He brings a drunk girl back to his apartment, and when he arrives his bail officer is waiting at his door to do an unannounced check-up and see if he is using drugs, she’s not impressed that he is drunk.  Cary proves to her that he didn’t drive drunk by showing her the taxi app on his phone.  She is satisfied that he didn’t drive, but still announces she has to place him under arrest because he left the state of Illinois and travelled over the border to Indiana.

Alicia heads to her interview with a TV reverend, and Alicia says that she is not an Atheist anymore, but she doesn’t commit to a certain religion either.  She announces that she is open to others’ beliefs.  The reverend brings up Alicia’s daughter Grace and her religion, and Alicia is a little thrown off.  On their way home Marissa drives and explains that she doesn’t like to talk to God either.

Cary is arrested and taken before the judge, Finn argues that any other criminal that leaves statelines is automatically thrown in jail.  The judge tells Cary’s bail officer that she has 24 hrs to turn in her report on what Cary did and why he went to Indiana and then he will decide whether or not he will revoke his bail an throw him back in jail.

Kalinda and Diane have a new plan.  The lease didn’t necessarily specify that Diane couldn’t leave the building, as long as she had someone still in the building that was representing her.  They run in to Lyman taking a nap as they are leaving the building and decide to recruit him to work at Florrick-Agos, so that they can say he was representing Diane at Lockhart-Gardiner for the last four weeks.  Diane points out that David and Canning will never let him argue in court because they don’t believe in him like she does.

Alicia sends Kalinda on a mission to dig up info on her Chinese app case, but Kalinda is interrupted by Cary’s bail officer who sits down and asks her a slew of questions regarding her relationship with Cary – Kalinda insists that they are just friends.

AUSA Agent Perotti pays Elsbeth a visit at her office late at night, she is in the middle of an intense solo dance party.  He announces that he is in love with her, and the smell of her baby lotion, and they begin ripping each other’s clothes off.

Grace is in the middle of a prayer circle with her friends, and they all gush about how Grace was able to “change her mother’s hardened heart.”

Diane, Kalinda, and Howard march in to David’s office.  Howard announces that he is Diane’s proxy, and she slaps an eviction notice on David’s desk and tells him he has 24 hours to get out of the building.

Cary shows up at the office, and Alicia informs him that she is here for him.  Cary thinks he should quit work, he doesn’t want to take the firm down with him.  Cary and Diane head back to court, and the judge decides that Cary must now wear an ankle monitor and can’t have any contact with Kalinda – because of her previous arrests.

Kalinda does some digging and finds out that the CIA set up a shell account and was buying out pieces of the Chinese company, unfortunately they have no proof that the company existed.  Elsbeth pays Perotti a visit and shows him a fake invoice saying it is proof of the shell account, he throws it in the shredder and laughs that he just destroyed her evidence.  The jokes on him though, she had a recorder in her purse the entire time.  Perotti knows he is caught, so he goes to court and announces that they are dropping all charges against Vargas.

After work Alicia and Diane head to the old Lockhart-Gardiner building, and it has been completely stripped and emptied out.  Diane says that Cary is going to take David’s old office, and she and Alicia make themselves at home.