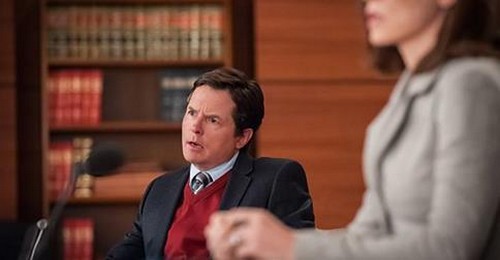 On the last episode, while preparing his case against Cary, Finn discovered a potentially devastating piece of evidence which could have had ramifications for Alicia and Peter. Meanwhile, Eli became wary when a new prospective candidate emerged in the race for State’s Attorney. Did you watch the last episode? If you missed it, we have a full and detailed recap right here for you.

On tonight’s episode as per the CBS synopsis, “Alicia takes on a college rape case which pits her against Louis Canning when it moves from a university hearing to civil court. Meanwhile, Eli and Elfman conduct a political focus group as Alicia dives into her campaign for State’s Attorney, on THE GOOD WIFE, Sunday, Nov. 9 (9:00-10:00 PM, ET/PT), on the CBS Television Network. Michael J. Fox returns as Louis Canning. Rita Wilson guest stars as lawyer Viola Walsh.”

Tonight’s season 6 episode 8 looks like it is going to be great and we’ll be updating it live for you beginning 9PM EST.

Tonight’s episode of The Good Wife kicks off with Alicia’s campaign manager holding a live panel to see how popular Alicia is among the voters, Eli watches from behind a double –sided mirror.  He calls Alicia and tells her they need to talk when he sees that Frank Prady is far more popular than she is.  Alicia hangs up on him because she sees her brother Owen sitting in her office.  She apologizes to him for questioning his relationship with Phil.

Owen says he has a case for Alicia, one of his students were raped.  She is going before the judiciary board to try and get the school to expel her rapist.  She hasn’t gone to the police though, because she doesn’t want her life to be overturned.  She just wants the guy out of her classes.

Alicia is heading out of the office and she finds Cary and Diane listening to the tape of him giving advice on trafficking drugs that was just entered in to evidence.  Cary explains that it sounds worse than it is because you can’t hear the beginning or the end of his conversation.  Alicia points out that there are three people on the tape and two of them are dead.  The third witness, a man named Dante, is MIA.  Kalinda is working on it and says she is trying to find Dante.  Cary says he wants to get on the stand and testify to protect himself, Diane and Alicia think it is a horrible idea.  Diane agrees to set up a mock cross examination to see how he will hold up on the stand.

Kalinda receives a phone call from Bishop, he demands to know if the feds are investigating him.  He is certain they are coming after him through Cary.  Kalinda tells him that she will look in to it for him and do a little digging.

Alicia arrives at the judiciary hearing, and her client Jody describes what happened to her the night she was raped in detail.  Troy, the accused rapist, interrupts Jody and tells her that she is going to ruin her career.

After the hearing Alicia heads to the panel, where her manager and Eli are reviewing footage form the panel.  They turn it off, they don’t want her to hear what they are saying about her.  She asks them to turn the tape on but they refuse.

Kalinda meets Bishop in a parking garage, and he informs her that he knows she is sleeping with DA Delaney.  She reassures him that Delaney isn’t working on his case, and she knew her long before she met Bishop or Carey.  Bishop tells her to go find out what case her girlfriend is working on, if it isn’t about him and then kicks her out of the car.
Alicia visits Finn in his new office, he doesn’t have any chairs yet, so they sit on the floor and drink wine.  Alicia says she is upset because someone in the focus group said she seems “obsessed with her own achievements.”  Finn says people use to say that about him, so now he goes to a soup kitchen every weekend, he encourages her to do the same.
The next day Alicia heads back to Jody’s hearing, the campus police officer describes that Jody seemed in control and didn’t even cry when she said she was raped, which is really strange.  Meanwhile, Diane and Viola are setting up a mock cross-examination to see how Cary will do if he takes the stand in court.

At the hearing the board announces that there is not enough evidence to expel Troy.  Alicia interrupts and is furious, she accuses them of ignoring due process and announces that she and Jody are going to sue the school.

Kalinda is sitting in her robe with Delaney and drinking wine.  Her phone rings and heads to the bathroom and Kalinda follows her and listens outside the door, she overhears Delaney mention Bishop’s name.

Alicia and Jody head to court, and Canning arrives in a wheelchair, he informs the judge that he is struggling with kidney failure and he has a kidney transplant scheduled – so on behalf of Jody’s school he would like to expedite the trial, the judge agrees.  After court Alicia corners Canning and asks him if he was lying and he insists he is really getting a new kidney.  She feels guilty about accusing him of faking it, so she goes to the soup kitchen with Finn afterwards.

Kalinda has been ignoring Cary’s calls so he follows her and sees Delaney drop her off at her car, and kiss her good-bye.  The next day at work Cary bombs during his mock trial because he is still upset about Kalinda.

The next morning Eli calls Alicia in a panic because someone took photos of her at the soup kitchen and are mocking her.  In the pictures she is talking on the phone, scrubbing a clean pot, and dressed like she is on her way to a dinner party.

Back at court, Alicia is representing Jody and Canning is arguing that her school’s judiciary committee is very thorough and points out that Alicia interfered with the hearing.  Alicia argues that the judiciary committee has only had one weekend of training and they have no knowledge of how to handle a sexual assault.
After court Alicia finds Cary in his office watching tapes of his mock examination and taking notes.  She tells Cary that he needs to stop being angry and he needs to give the jury a chance to see the injustice himself.

Kalinda calls Alicia and reveals that there is a “Rape Wall” at Jody’s school.  Whenever a girl is raped and the school doesn’t do anything about it, she writes the rapists’ name on the wall so other girls know to steer clear from him.  Afterwards Kalinda meets with Bishop and lies and tells him that Delaney isn’t working on his case, and says she is focusing on white collar crime.  Bishop doesn’t believe her so he gives her a blank white card and tells her to put it in Delaney’s wallet the next time they are together.  Kalinda asks what exactly it is, but he wont tell her.

Alicia and Jody meet with Canning, and Canning reveals that campus police did a random search of Troy’s room and found marijuana so they have expelled him.  Alicia insists they are still suing the school, but Jody says she doesn’t want to anymore.

Alicia heads to the focus group with Eli ad is thrilled to hear that one of the voters think she is a great woman.  Kalinda slips out of bed while Delaney is sleeping and takes her wallet in to the bathroom and is about to put the card in to it – and then chooses to break it instead.