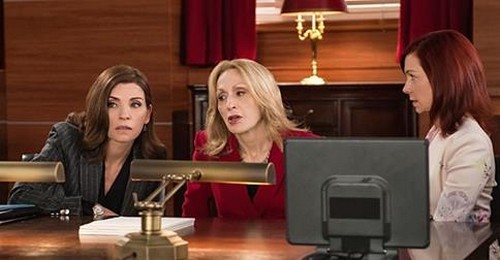 Tonight on CBS The Good Wife starring Julianna Margulies continues with an all new Sunday November 2, season 6 episode 7 called, “Message Discipline”. On tonight’s episode, Finn discovers a potentially devastating piece of evidence against Cary that could impact Alicia and Peter. Meanwhile, Eli becomes wary when a new prospective candidate emerges in the race for State’s Attorney.

On the last episode, Alicia and Elsbeth put their legal battle on hold when the government brought an economic espionage charge against both of their clients. Meanwhile, Diane set her sights on moving Florrick/Agos/Lockhart into the Lockhart/Gardner/Canning office space, leading to a battle with her former partners David Lee and Louis Canning. Did you watch the last episode? If you missed it, we have a full and detailed recap right here for you.

On tonight’s episode while preparing his case against Cary, Finn discovers a potentially devastating piece of evidence which could have ramifications for Alicia and Peter. Meanwhile, Eli becomes wary when a new prospective candidate emerges in the race for State’s Attorney.

Tonight’s season 6 episode 7 looks like it is going to be great and we’ll be updating it live for you beginning 9PM EST.

Tonight’s episode of The Good Wife begins in court, Cary is being released again and Diane is there representing him.  Finn requests an extension, and asks for 60 more days to locate the missing witness they need to convict Cary.  The judge denies his request and Finn heads back to his office.

Finn looks at the picture of Cary on the wall in the hallway, when he served as Deputy State’s Attorney for a brief time before he resigned.  He decides to do some investigating into what happened three years ago  when Cary was a DSA.  He interviews other DSA’s and employees at the office and learns that Cary allegedly lost evidence – two kilos of cocaine and was fraternizing with one of his co-workers.  He learns that the 2 kilos of cocaine that went missing was evidence to convict Bishop.  However, since Cary lost the cocaine, they couldn’t convict Bishop.

Finn heads to a bar to meet Alicia for drinks, he takes her aside and tells her that Cary is in serious trouble and she needs to isolate herself from him or else it could really hurt her campaign.  The next day Alicia heads to work, and warns Diane that she thinks they might have overlooked something in Cary’s case and she is worried about him.

Peter gives an interview for a news channel, and Eli notices a man named Warren backstage.  Warren explains that he has a friend at the news channel named Matt Ballou.  Eli doesn’t believe him though – he is certain that Warren is up to something.  After the interview, Peter bombs and orders Eli to make him a list of lawyers he can hire to keep him up to date on current affairs.

Eli and Alicia’s campaign manager head to Alicia’s office and warn her that they think another person is joining the race for state’s attorney because they saw Warren backstage.  Eli thinks that Warren is gathering signatures for a radio host named Frank Brady who is considering running for state’s attorney.

Diane and Cary head back to court and Finn announces that they want to press more charges against Cary and describes the missing evidence, the judge agrees to hear more about it and tells Finn to gather everything on the missing cocaine and return to court tomorrow.

Alicia meets with Frank per Eli’s request, and is blown away by his office full of cookies and gifts from all of his fans.  She jokes that he is way more popular than her.  Frank asks her if she has stopped by to try to land an interview with him, Alicia says she was just hoping that Frank would endorse her campaign.  Alicia leaves the office empty-handed, and brings Eli a basket of cookies from Frank.  She informs Eli that she couldn’t get his endorsement, but he did agree to interview her on the air.

Cary and Diane head back to court, and it doesn’t look good for Cary.  Finn has proof that Cary checked the cocaine out and it disappeared on his watch.  After court Kalinda calls Cary and tells him that she knows he is protecting Peter.  Apparently back when Cary was DSA, Peter was getting ready to run for governor and he asked Cary to expedite the cocaine because he thought arresting Bishop would secure him all the votes he needed.  Cary argues that he can’t drag Peter in to this, they’ll crucify him on the stand.

Peter receives a subpoena telling him he has to come testify in court that when he was state’s attorney he gave Cary orders to handle evidence incorrectly.  Peter’s new legal consult – Ramona, agrees to file a motion to dismiss and say that the governor is too busy to head to court and that Cary’s case has nothing to do with Peter.  The judge agrees with Ramona’s motion to dismiss the subpoena – and Diane and Cary are back to square one.

Alicia heads to her interview live on air with Frank Brady.  Frank points out that Alicia spent the majority of her life raising her children, so she may not be qualified to be a state’s attorney.  After Alicia is done bombing the interview, Eli and her campaign manager reveal that their sources have confirmed Frank is definitely running against her.

Kalinda does some digging, and finds a woman that worked at the crime lab when the cocaine went missing received $30,000.  She pays the woman a visit and learns that her cousin is Trey Wagner – the star witness that was set to testify against Cary and went missing, and she stole the cocaine from the lab and sold it to Trey.  Kalinda tracks down Trey, and calls Finn and Trey says that he will drop his story about Cary and turn over Bishop and testify against him in exchange for immunity.

Finn heads to Castro’s office and tells him that he found Trey and they are going to drop charges against Cary and go after Bishop.  Castro argues that he doesn’t want Bishop – he wants Cary.  Finn realizes that this entire case has been about Castro making Cary and Alicia look bad so he could win the election, so Finn resigns from his DSA position.

The next day – Diane arrives at the office and informs Alicia that Trey Wagner and his cousin that stole the cocaine and framed Cary, both died in a car accident the night before and now they have no way to prove that Cary is innocent.

Frank arrives at Alicia’s office and informs her that he won’t be endorsing her as state’s attorney, because he has decided to run himself.