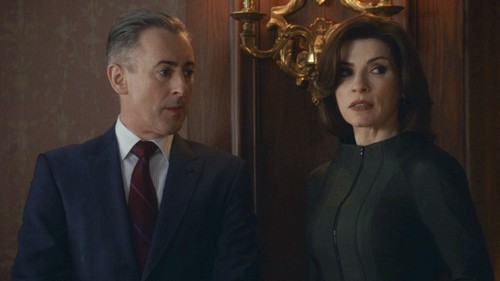 Tonight on CBS The Good Wife returns with another dramatic episode.  In “Dramatics, Your Honor,”  Alicia enlists Cary as her lawyer when she is deposed as part of the voter-fraud investigation. Meanwhile, Will goes up against a new prosecutor who proves to be a formidable adversary in the Jeffrey Grant case.

On last week’s episode Alicia looked to her past for inspiration when she was asked to deliver the keynote address at an American Bar Association conference in New York City. Meanwhile, the competition between Florrick-Agos and Lockhart-Gardner ramped up as each firm tried to align with a powerful Manhattan lawyer; and Will turned to an old acquaintance when it became clear that Nelson Dubeck’s investigation into voter fraud wasn’t going away. Did you guys happen to catch last week’s episode?    If not then don’t worry because we have a detailed recap right here that will get you caught up!

On tonight’s episode Alicia enlists Cary as her lawyer when Nelson Dubeck approaches her to participate in a deposition regarding his investigation into election rigging. Meanwhile, Will continues the difficult defense of Jeffrey Grant as he faces off against a new prosecutor who proves to be a formidable adversary.

Season 5 episode 15 looks great and we’ll be updating it live for you beginning 9PM EST. While you’re waiting for the drama to unfold hit up the comments and let us know what you think of the season so far!

On tonight’s episode of the Good Wife, Will is forced into fighting D.A. Finn Polmar in open court for the life of his client Jeffery Grant. Despite the fact that both the DA’s office and the police had previously railroaded another suspect, they now believe Jeffery was the one to murder their victim. However Will is not allowed to mention that little fact in open court and the Judge even manages to stop him from alluding to the Justice of the peace’s previous mistakes.

The only thing he can fight is the one shred of evidence the D.A. has – the DNA. DNA was found under the victim’s fingernail and that lead the prosecutor to believe that she tried to fight off her would be rapist. Now Jeffery’s DNA was found under the victim’s nails and regardless of how much evidence Kalinda and Will try to find just to prove their “touch DNA theory” as in the two people might have touched the same thing; Finn is able to strike their evidence down.

The two college students both checked out the same book from the library. So that could have helped prove Will’s point, but the victim was later spotted at the pool and chlorine washes off all dead skin cells.

This case is proving to be harder than he thought it would be and Diane can’t help see how much this case is getting to Will. He pulled several associates to help with the case and on top of that he turned down a plea agreement. The DA’s office offered Jeffery 8 years and he turned it down. He swears he’s innocent and that he ever even met the victim.

Well, someone happens to disagree on that matter and isn’t afraid to testify for the DA. The Professor that was originally accused of killing Dani (that was her name) is also stating that he saw Jeffery and Dani hanging out after his study group on numerous occasions. Jeffery denies that and yet they still can’t find any proof of him running into Dani any time after she went to the pool.

Jeffery’s parents have begun to worry about the way Will is handling the case and so they sought out Alicia’s advice. They wanted her opinion on and she in returned told them to trust their lawyer. She went on Will about what his clients were doing. She said she didn’t feel right about undermining him and anyways they both know he’s the better lawyer.

Will was angry with the parents. He let it slide because he knew they were scared and that’s why he kept making Kalinda look for evidence. Kalinda had told him about wanting to quit and he refused to believe she could. They’re good at this job for a reason and when Kalinda found evidence that Jeffery and Dani were on the same hospital sheets – she proved Will’s point. They could very well get Jeffery off with what Kalinda found.

Alicia didn’t know she was being followed and so she didn’t realized how it would look for her to be seen with Willl days after Agent Nelson approached her. Nelson wants to take down her husband for voter fraud and he’s willing to use every dirty trick in the book to do so. That’s why he threw Alicia’s actions back at her.

He accuses Alicia of still having an affair with Will. He was hoping to trip her up and it failed. Alicia knew he was reaching when he turned their deposition into a smear campaign. She never said anything about Will, but she mentions her husband. Nelson showed her video of election night and it was the one thing that managed to shake her resolve not to say a word.

There was more footage of the fraud than she realized and he was the first one to show it to her. So naturally she claimed her husband would never have been involved in something like that. Even saying that was too much and Carey quickly pulled her out of there before she could add anything else.

Back in court, Will might finally have found enough evidence to help his client, but Jeffery had gotten antsy while waiting for a sign or something to feel better about. He started to worry and then his freak out escalated into something dangerous. He’s been getting beat up in lock up and it seems he simply couldn’t take it anymore. He stole the bailiff’s gun and just started shooting. When he was done with shooting at others, he then tried to kill himself though he was unfortunately out of bullets by this stage.

He injured several people because he couldn’t wait and ended up killing Will, the only man that still believed in him, in the process.

Diane tried to contact Alicia and then Kalinda tried calling but by this time Eli had Alicia’s phone and was ignoring the calls. He didn’t want Alicia to be interrupted in the middle of a correspondence dinner. When he did answer the phone; even he knew that Alicia had to be informed right away so he pulled her aside to accept the call.