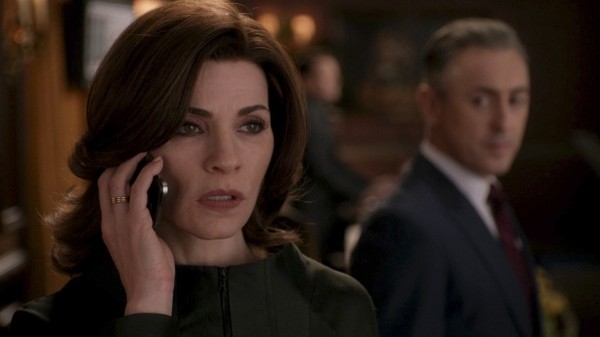 Tonight on CBS The Good Wife returns with another dramatic episode.  In “The Last Call,” Alicia searches for answers as she tries to make sense of Will’s death in the aftermath of the courthouse shooting. Meanwhile, Diane delivers the somber news of Will’s passing to the firm’s partners who must decide how to move forward.

On last week’s episode a major character died. The name of that character? Will Gardner. Alicia enlisted Cary as her lawyer when Nelson Dubeck approached her to participate in a deposition regarding his investigation into election rigging. Meanwhile, Will continued the difficult defense of Jeffrey Grant as he faces off against a new prosecutor who proves to be a formidable adversary.  Did you guys happen to catch last week’s episode?    If not then don’t worry because we have a detailed recap right here that will get you caught up!

On tonight’s episode Matthew Goode Returns as Finn Polmar, Star Prosecutor in the State’s Attorney’s Office.  Alicia searches for answers as she tries to make sense of Will’s death in the aftermath of the courthouse shooting. Meanwhile, Diane delivers the somber news to the partners at Lockhart/Gardner who must decide how to move forward.

Season 5 episode 16 looks great and we’ll be updating it live for you beginning 9PM EST. While you’re waiting for the drama to unfold hit up the comments and let us know what you think of the season so far!

Once she heard the news – Alicia had to leave the Correspondents’ dinner. Even if that meant she missed introducing her own husband. Because this time Alicia chose Will over Peter.

Whatever that could possible means now!

Meanwhile Diane is struggling to deal in the aftermath of Will’s death. She returned to the office to find the partners already waiting for her in a meeting. It seems she forgot that she was supposed to talk about the LA branch. So when she walked she was faced with all the partners wanting to talk about how much of their time she wasted. But when she told them about Will they were all left speechless.

Even David who is normally ice cold sometimes couldn’t pretend that Will’s death hadn’t affected him. He took a few moments alone to give himself a second to cry. And once he finished he then returned to work. Although that sound like he went back to his true form; he knew he had to notify Will’s clients and he also knew that Diane wasn’t in the right frame of mind to do so.

Diane was falling apart, but at least she had Alicia to do it with her. They each felt guilty and while Diane took it out on the firm’s overly dramatic intern (the intern was there for barely a week and she thought it ok to cry over Will); Alicia chose to look for answers.

Will had called her when his trial was on break and he got pulled away before he could say what he wanted to talk about. So now she needs to know what he said because she’s afraid he was angry with her when he died. Alicia had stolen yet another one of his clients and she’s hoping that Will hadn’t called her out of anger.

So she asked the judge and when he couldn’t help her ascertain Will’s frame of mind she then went looking for ADA Finn Polmar. She was waiting to talk to Finn when Peter called her. Peter wanted to express his condolences and Alicia didn’t have time for it.

No one is taking the news well. Kalinda has become overly involved in the case. She’s hanging out with the detectives and going over everything that happened in the shooting. She was there when the bailiff confessed Jeffery was only able to steal his gun because he had looked at a text message from his pregnant girlfriend. And she was also there when Jeffery’s newest attorney told the cops that her client wasn’t the one that shot the two people in the courtroom.

According to his defense team, the two people that were unfortunately gunned down were injured due to the exchange of fire from both sides. Jeffery and the cops alike. However Kalinda went to the Medical Examiner’s office and he told her that Jeffery was the one that killed Will.

Alicia had called her and imagine her surprise when she picked up on Kalinda planning something. What is Kalinda going to do next and why doesn’t she want Alicia to know?

Alicia had learned through Finn’s assistant that Will was angry that day. The assistant claims that Will was upset someone was stealing his clients. And this of course made Alicia lose the last shred of hope she had. When she called Kalinda she was probably looking for the one person in the world that could have made it better. Yet Kalinda was too busy extracting a favor from Detective Jenna.

As for Kalinda, she used Jenna to arrange a meeting with Jeffery. He’s been on suicide watch since the accident and she tempted him with what he wanted. Kalinda offered to give him back his belt so that he could go through with the suicide, but then she pulled it away at the last minute. She taunted him to get back at him. Though all along Kalinda wanted him to live with what he did to Will. If everyone else has to then why should he be left out?

Finn called Alicia. He heard that she wanted to speak to him and so he asked her to come see him. He wanted to tell her he was sorry about Will. And more importantly he helped clear up Will’s mindset. Will wasn’t angry at Alicia – he was angry at this guy named Damien for stealing his clients.

Alicia was happy to hear that but it also begs the question of what was the real reason behind Will calling her that day. Will could have called to ask for a second chance with her and now Alicia will never know.

Diane was able to pull herself together when she needed to. When a client of Will’s demanded a meeting – she gave him that meeting and then she fired him. She also blackballed him with other law firms.

And when he had to – Cary was able to take a stand as well. Apparently the rest of the world wanted to be insensitive today and Cary made sure to take out his aggression on the right people.

But how did this episode end for Alicia? It stopped at her slowly falling apart and her husband not even noticing.