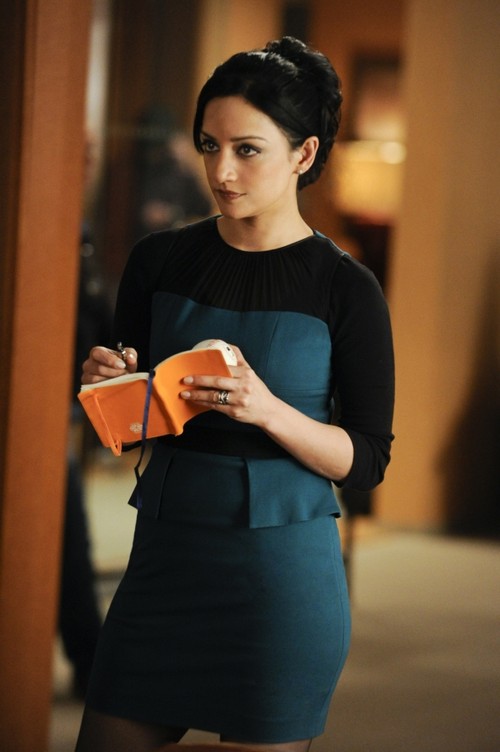 Tonight on CBS The Good Wife returns with another dramatic episode. In “All Tapped Out” Florrick/Agos represents an NSA whistle-blower and learns that the agency has been monitoring the firm and Alicia’s personal life. Meanwhile, Louis Canning joins Lockhart/Gardner; and Alicia goes after the State’s Attorney when he tries to make Finn a scapegoat in the Jeffrey Grant case.

On last week’s episode Jason O’Mara Guest Stars as Lockhart/Gardner Lawyer Damian Boyle. Alicia and Diane considered merging their firms in the wake of Will’s death, even as they found themselves on opposite sides of a contentious divorce suit. Meanwhile, Alicia offered assistance to Finn when it became clear that the State’s Attorney was looking for a scapegoat in the Jeffrey Grant case.  Did you watch last week’s episode?  We did and we have a full and detailed recap, right here for you.

On tonight’s episode Florrick/Agos takes on the case of an NSA whistleblower, only to learn that the agency has been monitoring the firm as well as Alicia’s personal life. Meanwhile, Diane faces the difficult task of working alongside Louis Canning when he joins Lockhart/Gardner. Also, Alicia goes after the State’s Attorney when he attempts to make Finn a scapegoat in the Jeffrey Grant case.

Season 5 episode 18 looks great and we’ll be updating it live for you beginning 9PM EST. While you’re waiting for the drama to unfold hit up the comments and let us know what you think of the season so far!

The top secret merger between Diane and Alicia ended up getting announced long before Alicia was ready to deal with it.

Someone approached Clarke wanting to know when they would receive the files from Florrick/Argos. When Clarke was given the shocking news he quickly went to Cary.  Cary was just hearing about the merger and so of course he chose to re-enforce his position as a named partner. Having Alicia making deals behind his back was embarrassing and he took it out on Diane. Cary called up Diane and hard-balled her over this “merger”.

If this merger is going to go through then Cary wants his firm to come out on top. It naturally made Diane re-think her decision about the whole thing.  Diane went to the partners at her firm to tell them the bad news. David said she had a point about them merging with another firm.  Last week David was fighting the decision. Yet this week he re-introduces the rest of the partners to Louis Canning.

David’s sudden change of heart has to do with the way that he nearly ousted Diane as the managing partner. That failure has led direly to this current act of revenge. Diane would never want to merge with Louis, but because she was trying to sell Florrick/Argos to her firm; they now believe it’s a must that they merge with someone.

So Diane is stuck with Lockhart/Gardner/Canning while Alicia is stuck with an angry Cary. He took on a new client without discussing it with her first. But this client has the potential of being too much to handle even for them.

Jeff Dellinger works for the NSA and he recently took home a USB by accident. He knew he was going to get into big trouble for it and so he approached Florrick/Argos. Jeff knows how well the firm works because he and his co-worker have been listening in on all their conversations.

The NSA has a way of inadvertently listening in on everyone – and as it happens Jeff’s unit personally enjoyed the conversation between Cary and Diane earlier. That alone made Jeff knew that Cary would be as tough as he needed him to be.

Which is why he was hired. Cary and Clarke will be dealing with Jeff’s case leaving Alicia to take on the State Attorney’s essentially by herself. And the bottom line is Alicia wasn’t ready for court or hearing as the charade was being called.

ADA Finn was being accused of pushing Jeffrey Grant to shooting up the courtroom. His co-workers, his boss and former friend were all up to blaming the whole sorry mess on Finn. After all he was the one that demanded a young kid be transferred into general population. Even though it’s a commonly used tactic by everyone there.

So Jeffery subsequent beatings and the toll it took on his psyche was suddenly Finn’s fault. And as Alicia was listening to the proceedings; she realized that she wasn’t ready to defend to Finn. Not when a part of her blames the system for getting Will killed. So she passed along the case to Clarke.

However she later changed her mind again on the matter. And only got the chance to tell Clarke when they all began to freak out over Jeff’s bombshell.

Jeff revealed that the NSA was listening in on the law firm. The actually protocol said that they had to monitored everyone within three degrees of Alicia and that’s because of who her husband is. So they swiftly took their firm offline and told them to not to use the phone. Then she went to Eli’s office to warn him about it, but Peter was there as well.

So Peter heard the full story.

He hadn’t known that someone was personally targeting him and his family. And when he got news he decided to put a stop to all the overheard conversations. He did this by reaching out to people he knows with higher clearance. Otherwise known as political friends – people who will charm you to get ahead all the while never lifting a finger to help.

That’s why it wasn’t surprising when the friend Peter called completely denying any NSA involvement. Until, that is, Peter threatened to go over their personal and possibly embarrassing conversations over the phone rather than in person.

The friend promised to get the surveillance shut down and in the meantime Alicia used the NSA to take revenge. She got Louis put on the watch list by openly asking him about Al Qaeda and asking him what was his political background. She did this after he kept calling about the Chum Hum account.

Alicia isn’t going to hand that case over. Finding out the NSA was spying on her was the one thing that could light a fire under her. So its going to take time to heal but in other words Alicia is back. She returned to Finn’s hearing with some of her old spirit. And this time she actively defended her client.

Meanwhile Cary and Clarke got Jeff’s people to lay off of him. What he did was silly and yet he never should have gotten demoted. So Jeff is going to be OK and the firm is no longer going to be a source of amusement for him and his buddies.

Despite losing out the merger – Florrick/Argos is still hanging on and over there at Lockhart/Gardner/ Canning – Canning has managed to get Kalinda to back off. He did this when he called uneasy truce with Diane.

But how long will this truce last?