BY Kristine Francis on May 19, 2014 | Comments: one comment
Related : Recap, Television, The Good Wife 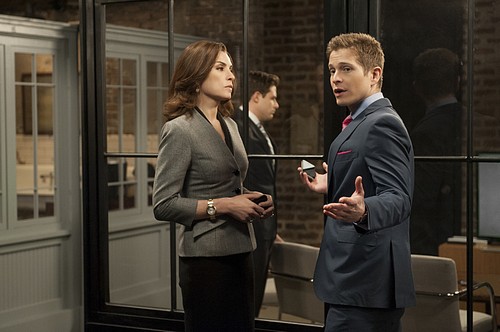 Tonight on CBS The Good Wife returns with a dramatic finale episode. In “A Weird Year” season 5 ends with Alicia and Cary learning about a threat to the firm when an open feed from a camera is left on following a teleconferenced deposition with Lockhart/Gardner. Meanwhile, Louis Canning vies for a larger role at LG; and Alicia entrusts plans for Zach’s high-school graduation party to Jackie and Veronica.

On last week’s episode Alicia managed the fallout when her client’s insensitive statements to the press threatened the fate of a multi-billion dollar merger. Meanwhile, Diane faced a potential conflict of interest when she and Louis Canning were on opposite sides of a class action suit involving a pharmaceutical company. Also, Eli learned the truth about Alicia and Peter’s relationship.  Did you watch last week’s episode?  If you missed it we have you covered, we have a full and detailed recap, right here for you.

On tonight’s episode an open feed from a camera mistakenly left on after a teleconferenced deposition between the lawyers of Florrick/Agos and Lockhart/Gardner reveals a threat to the firm that Alicia and Cary never saw coming. Meanwhile, the fate of Lockhart/Gardner hangs in the balance as Louis Canning vies for a larger role. Also, Alicia entrusts Zach’s high school graduation party to Jackie and Veronica.

Season 5 Finale looks great and we’ll be updating it live for you beginning 9PM EST. While you’re waiting for the finale drama to unfold hit up the comments and let us know what you think of the season so far!

Two firms are being sued and yet Lockhart/Gardner wants to lay all the blame on Alicia and thereby making the lawsuit solely Florrick/Agos’s problem. Louis Canning and his cohorts want to oust Diane as the managing partner and if they can get Alicia to go down then they know Diane would be caught up in trying to protect her. So it’s killing two birds with one stone. They can get rid of Diane and Florrick/Agos in one fell swoop.

Both firms had met with their former client through a teleconferenced deposition and after it was done – the law offices of Lockhart/Gardner forgot to turn off their side of the cameras. They had mistakenly thought that turning off the monitor was the same as shutting the webcam down. And one of the partners at Florrick/Agos just happened to notice the mistake, but instead of telling the other guys that they left the computer on – he merely kept on watching.

Clarke saw what was going on and felt it was his moral duty to try and turn the monitor off and that’s how Alicia and Carey found out about the potential problem. They saw Clarke fighting with a partner over what appeared to look like a remote.

Once he was up to date, Carey didn’t know whose side to pick so he asked Alicia to make the final decision on whether or not they should keep watching. Alicia thought they should take the high road and inform the other firm that they didn’t turn off the computer. And she almost warned too. Then overheard some rather disturbing news.

For a second there Alicia wanted to be the better person, but when she heard Louis and David talk about destroying her firm then all bets were off.

Alicia and Carey are going to continue watching the feed to see what David is planning. Right now they’re assuming that David is going to try and pinpoint the fault of the lawsuit entirely on Alicia. They think that David wants to get her disbarred. So not only is Alicia’s career on the line, but in amidst of all this drama Alicia also has to deal with Finn possibly dropping out of the State’s Attorney’s race and planning her son’s graduation party. Which, if she were being honest with herself, she would admit she doesn’t have the time to play “mom”.

Some dirt from Finn’s past has landed into his opponent’s hands and Eli found out about it from one of his spy. So he told Finn in no uncertain terms to quit gracefully. Peter can’t be attached to anyone with a shady past. And that’s why Peter suggests Diane as a replacement. She’s already been vetted and they know she’ll make a great choice.

However she’ll be the second choice and Diane picked up on that once she heard the boys’ offer. They called her at her office asking for a meeting and she had initially thought that they were calling to offer her the Supreme Court Justice seat again. But they weren’t and Diane isn’t stupid enough to agree to run for anything until she has Kalinda see what her competition will be like.

Kalinda is after all Diane’s Girl Friday. Although Carey didn’t know how much Kalinda did for her boss till he overheard from the monitor that Diane sometimes uses her to manipulate him. As matter of fact, Kalinda even made a date with Carey right there in front of the cameras with plans of sussing him out on a possible merger.

Alicia saw how things were beginning to look and that’s why she talked to Cary about merging with Diane. Yet after what he just saw – he’s not in the mood to merge. Cary fears that he’ll be pushed out of a named partner seat and rather than talk it over with Alicia – he went to a meeting with Louis Canning behind everyone’s back.

None of the partners or Alicia knew about the meeting. They only found out about it from that pesky webcam. They listened in as Louis told David about his meeting in which Cary informed them about a possible merger.

So Louis took the information and decided to roll with it. He couldn’t win the necessary votes to become the managing partner, but he could threaten Diane with something far worse. As a partner, he can legally dissolve the firm. So either she gives up her position or she can watch the firm she built burn down into ashes.

Diane chose a third option. She actually went to Florrick/Agos with a proposal. But not with a proposal they were expecting. She asked if they were willing to take her into the firm. Along with you know the millions she brings in.

Meanwhile back at home, Alicia had to say a hasty goodbye to her son. She got to his graduation on time to see him get his diploma though she pretty much missed his farewell with the family. Apparently she was just too preoccupied with going-ons at work. So Alicia wasn’t even the one that made him his goodbye dinner. His grandmothers had to step in to do that. Much to the annoyance of Alicia.

After Zach had gone, it was just her, Peter, and Eli at the table. And that’s when Eli heard from Diane that she’s passing up the State’s Attorney seat. Eli didn’t know what to do next. They lost Finn (which he confirmed with Alicia) and now they’ve lost Diane.

So no wonder Eli’s eye eventually turned towards Alicia. In the final moments of the season finale, Eli asked Alicia how she would feel about running. And all she could say was “WHAT”!