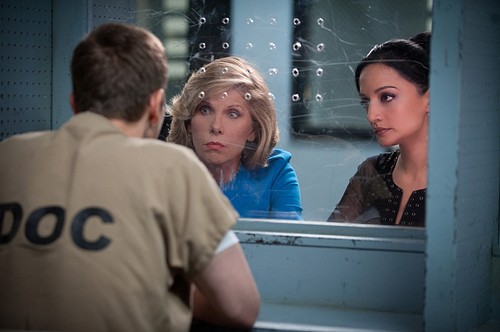 Tonight on CBS The Good Wife starring Julianna Margulies returns with an all new Sunday September 28, season 6 episode 2 called, “Trust Issues”. Tonight, Alicia scrambles to hold onto the firm’s biggest client as Florrick/Agos continues to struggle with an internal legal crisis. Meanwhile, Diane plots her move from Lockhart/Gardner and hunts for partners to bring with her to the new firm.

On last week’s episode, Alicia was adamant in her refusal to run for State’s Attorney despite Eli’s attempted to persuade her to launch a campaign. Meanwhile, as Diane considered joining Florrick/Agos as partner, an internal crisis threatened to destroy the firm. Did you watch the last episode? If you missed it, we have a full and detailed recap right here for you.

On tonight’s episode Alicia scrambles to hold onto Florrick/Agos’ biggest client as the firm continues to struggle with an internal legal crisis. Meanwhile, Diane continues to plot her move from Lockhart/Gardner and looks for partners to bring with her to the new firm.

The season 6 episode 2 looks like it is going to be great and we’ll be updating it live for you beginning 9PM EST.

Tonight’s episode of The Good Wife begins with Alicia visiting Cary in jail, they only have five minutes.  Cary preps Alicia on all of his cases and what to tell their clients about his arrest, and what angles he was working on the cases.  Alicia reveals that Diane is leaving Lockhart & Gardiner and joining their firm.  Cary is furious because he didn’t okay Diane joining their firm, and he is supposed to be a partner and help her make decisions.

Diane heads to court and pleads with the judge to release Cary since they already paid the bail.  The judge isn’t budging.  Kalinda and Diane pay Cary a visit afterwards and break the news to him that the ASA has a recording of him advising Bishop’s men how to traffic heroin without getting caught.  Cary insists that the recording was doctored and he never said such things.

Peter Florrick doing an appearance on Good Morning America.  Eli bickers with a woman behind the scenes about not giving him the job she promised him in DC.  Meanwhile, the reporter is asking Peter all the hard questions, and about Alicia’s criminal clients.

Alicia has to take the stand and testify that the money they used to bail out Cary came from a donation from Rojas’s health clubs and was not obtained illegally.  Alicia takes the stand, but is made to look like a fool when the ASA shows the judge that half of the members of Rojas’s health club are actually legally dead.  The healthclubs are just a front to launder Bishop’s drug money.  The judge is impressed with the ASA’s findings and agree to issue a subpoena for Bishop.

At Lockhart & Gardiner they are holding a company meeting, Diane announces that she has decided to resign and has handed her share in the partnership.  After the meeting Dean corners her and demands to know why she recruited him just to leave, he came to LG for her.  Diane takes him aside and reveals that she is going to Florrick’s, and she wants him to come with her.  Meanwhile, Alicia heads to the deposition of one of Cary’s cases for him, and buries the opposition in paperwork.

Kalinda pays Bishop a visit at her kid’s soccer game, he demands to know who on his team was wearing a wire.  Kalinda insists that she is in the dark, and has no idea who the mole is.  Bishop agrees to let her interview the three men that Cary allegedly gave illegal advice to.

Alicia receives a phone call from the bank and learns that she has been pre-approved to take out a second mortgage, she plans to use the money to bail Cary out since Rojas’s bail money was obtained illegally.  There’s only one hitch, Peter has to sign the paperwork too because he co-owns Alicia’s house still.

Diane and Kalinda sit down with Bishop and the three men that he gave advice to.  They insist that they aren’t stupid and they were all talking in hypotheticals, and Cary was just telling them how a criminal would get away with something on a movie.  After the meeting, Diane tells Kalinda that one of the men, Trey, will make a good witness because he is likable.  Kalinda reveals that Trey was the one wearing the wire.  But, they can’t tell Bishop because Bishop will kill him.

Alicia meets with Peter and asks him to sign the loan papers so that she can bail Cary out.  Peter refuses to sign the papers and explains that it would look horrible if he co-signed on a criminals bail.  Alicia argues that the man she married would have done the right thing, and Peter laughs that the woman he married never would have asked him to do this.
Dean checks out Alicia’s firm and is disgusted when he learns that a partner is in jail and sees that the office is tore apart and under construction.  He reports back to Diane that he isn’t interested, but Diane convinces him that a man of a different race could really excel at the FLorrick start-up firm.

While Alicia is trying to work on Cary’s deposition, one of Peter’s associates, Mr. Nolan arrives and says that he needs to speak to her.  He announces to her and Robin that he has decided to loan them $1.3 Million for Cary’s loan.  After talking to Mr. Nolan, Alicia realizes that he is trying to bribe her to run for state’s attorney because he doesn’t like the current ASA.  Alicia refuses the money, and Robin is shocked.  She tells Alicia that she needs to take the check.

Alicia has had enough, she pays Eli a visit and tells him that she is not running for state’s attorney.  Eli had no idea that Ernie Nolan paid her a visit and tried to give her $1.3 Million.  Alicia heads back to the office and finds Dean and Diane there, Dean announces that he is joining their firm, and he is bringing six other lawyers with him that want a chance to work at a firm from the ground up.  Kalinda calls Diane with bad news, one of their witnesses that are planning to testify for Cary are dead.  She thinks Bishop killed him because he thought he was the one wearing the wire.

Alicia receives a phone call at 7:00 AM from a reporter who wants to know about the results of a poll that was on the internet asking readers if they would vote for Alicia if she ran for state’s attorney.  She heads to Eli’s office to curse him out, but he insists he wasn’t polling on the internet, he thinks it was the current state’s attorney Castro.  Alicia barges in to Castro’s office and announces to him that she isn’t running, Castro insists that he wasn’t the one polling.  Peter is furious that Castro is polling Alicia, but after Alicia leaves Eli confesses that he is the one who put the poll out because he thought it would inspire Alicia to want to run in the election when she seen how many people said she would vote her.

Alicia wins Cary’s case and asks the partner’s to vote on whether or not they can use the $4 Million they won to bail Cary out, they all agree.  A guard walks in to Cary’s cell and announces he is a free man and he made bail.  At Lockhart Gardiner, Diane clocks out after her last official day at the firm.  She takes her photos off the desk and walks out, with Dean and the other six lawyers following her.  She whispers good-bye as they all file in to the elevator.  Alicia arrives at work and finds Cary standing in the office, she hugs him and tells him how much she has missed him.