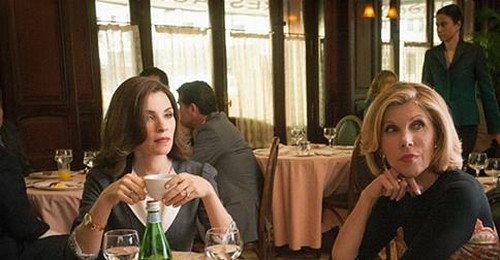 Tonight on CBS The Good Wife starring Julianna Margulies returns with a an all new Sunday September 21, Season 6 premiere episode called, “The Line”. Tonight season 6 begins with Alicia refusing to run for State’s Attorney despite Eli’s attempts to persuade her to launch a campaign. Meanwhile, Diane considers joining Florrick/Agos as a partner, but an internal crisis threatens to destroy the firm.

On the last season 5 finale an open feed from a camera mistakenly left on after a teleconferenced deposition between the lawyers of Florrick/Agos and Lockhart/Gardner revealed a threat to the firm that Alicia and Cary never saw coming. Meanwhile, the fate of Lockhart/Gardner hanged in the balance as Louis Canning vies for a larger role. Also, Alicia entrusted Zach’s high school graduation party to Jackie and Veronica. Did you watch the last season’s finale ? If you missed it and want to get caught up we have you covered.  We have a full and detailed recap, right here for you.

On tonight’s episode Alicia is adamant in her refusal to run for State’s Attorney despite Eli’s attempts to persuade her to launch a campaign. Meanwhile, as Diane considers joining Florrick/Agos as partner, an internal crisis threatens to destroy the firm.

The season 6 premiere looks like it is going to be great and we’ll be updating it live for you beginning 9PM EST. While you’re waiting for the premiere drama to being hit up the comments and let us know what you think of the season so far!

Tonight’s episode of The Good Wife kicks off with Alicia and Eli at dinner, Eil is trying to convince her to run for state’s attorney. She informs him that she isn’t a politician and she will never agree to run, she think Peter put him up to asking her. Eli says Peter doesn’t know anything about it, he is asking her because he thinks she could win.

Cary calls Alicia and tells her that he doesn’t think they should meet with Diane tomorrow and he doesn’t want to be co-opted by her firm. Alicia reminds him that she is bringing them $38 Million in business. Cary hangs up and calls Kalinda and convinces her to meet him for drinks. He is jumped by two men with guns at his car and put in the back on a cop car, he has no idea why he is being taken in to custody or where they are taking him. Since he is a no-show, Kalinda agrees to meet up with Sophia.

Cary is chained to a desk, and demands that the detective give him his phone call and informs him why he has been arrested, instead the detective takes his watch. He is chained to a line of convicts and lead to the jail cells. At the office the next morning Alicia demands to know where Cary is, because ehe didn’t make it to their meeting. She is baffled because his car is in the parking lot, which is where he was arrested the night before. Cary finds a man in holding that he recognizes as a Lockhart Gardiner client, and tells him to send Kalinda a message that he has been arrested. Kalinda calls Alicia, and Alicia rushes down to court. When she arrives Finn is the state’s attorney and she learns that Cary was arrested for 900 grams of heroin, and Finn informs the judge that he wants bail set at $1.3 Million because he thinks Cary is a flight risk. Alicia is shocked. She argues that Cary has a clean record and has ties in the community. The judge sets bail as $1.3 Million, Cary tells Alicia that it must have to do with Bishop as they are rushing him back to the holding cell.

Alicia rushes out of court and calls Bishop and arranges a meeting. Then, she calls Robyn and tells her that they have to raise $1.3 Million to get Cary out of jail. She meets up with Bishop and fills him in on Cary’s arrest, they agree that the state is using him to get information on Bishop. Alicia reassures him that Cary isn’t going to give the state any information and promises him that they are handling it.

Kalinda pays Cary a visit and wants to know what happened. Cary admits that he met with Bishop because they were scared they were losing customers in his kitchen with three of his men, but insists that he didn’t help them traffic heroine or give them any legal advice on how to traffic heroine. The guard arrives and tells Cary that his time is up.

Diane announces to Louis and David that she is retiring, and Louis can take over as general manager. They are confused why she is leaving, but she insists she just wants to spend time with her husband. Meanwhile at Alicia’s firm she is meeting with Diane’s clients and telling them that Diane is switching over to her firm and she wants her clients to join her.

Alicia and Robin are shocked when Bishop arrives at the firm with a man named Rojas who owns a string of businesses. Rojas drops a duffle bag with $1.3 Million in cash on Alicia’s desk and says that he has decided to donate the money for Cary’s bail. Bishop informs Alicia that he just came by to discuss his legal affairs and he had nothing to do with Rojas’s generous offer. Alicia reassures Bishop she understands.

David is on to Diane, and knows that she and Alicia are recruiting clients. He sits down with the same clients and insists that they stay at Lockhart-Gardiner because Alicia’s firm is full of criminals and Cary is in jail right now for trafficking heroin.

Diane and Alicia take the $1.3 Million to the judge to bail Cary out, but Finn argues that they are using drug money and that the bail be denied. The judge says he will give them a week to clear the money and prove where it came from and that it is not from selling drugs.

Kalinda is determined to get Cary out of jail, she meets with Sophia and demands to know who the informant is that is working in Bishop’s organization that turned Cary in. Sophia refuses to give up a name, because Bishop will kill their informant if his cover is blown. Kalinda argues that Cary is innocent and is facing twenty years for a bogus crime. But, Sophia reveals that Cary is guilty, he told Bishop’s men how to traffic the cocaine without getting caught, and they have it all on video tape. Meanwhile, Cary is marched back to his jail cell after Alicia’s failed attempt to bail him out.