The Good Wife Spoilers: Season 5 Episode 14 “A Few Words” – Will Covering Up Fraudulent Votes – Could He Go To Jail? 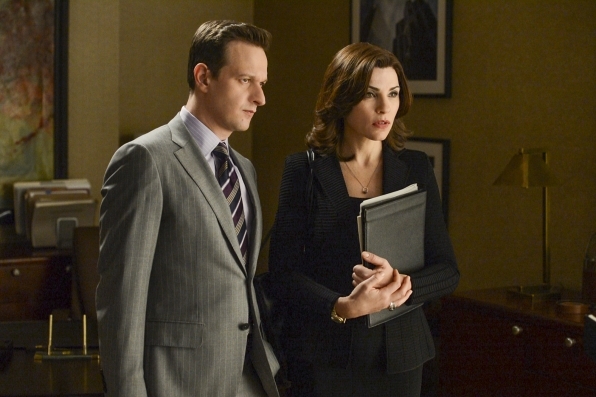 CBS has released a spoiler video for The Good Wife Season 5 Episode 14, and it looks like another dramatic, can’t miss episode, just like the last one we recapped here. The all new episode, titled “A Few Words” will air next Sunday, March 16th.

In the promo video it appears that Will has landed himself in some seriously hot legal trouble, since a video of him “conspiring to cover up voting fraud” has surfaced. Guest star Eric Bogosian will return as Nelson Dubeck, an investigator for the Office Of Public Integrity. Dubeck’s investigation into the fraudulent votes doesn’t seem to be going anywhere, anytime soon, and Will Gardner is at the top of his list of suspect. On top of Will’s mounting legal problems, his power struggle with Diane will continue.

Ironically, while Will’s legal career is going down the drain, Alicia is receiving critical acclaim for her work as a lawyer. According to The Good Wife spoilers, in Episode 14 Alicia will be invited to be a speaker at the American Bar Association Conference in New York City. Alicia will look to her past experiences for inspiration when she is writing her speech for the conference. When she isn’t preparing for the American Bar Association Conference, Alicia and Cary will be fighting to form an alliance with a powerful lawyer (guest star Rayna Hecht).

Are you happy to see Will Gardner finally being held accountable for some of his actions, or do you feel a little bit sorry for him? Share your thoughts on Episode 14 of The Good Wife in the comment section below, and don’t forget to check CDL later this week for a full recap of “A Few Words.”