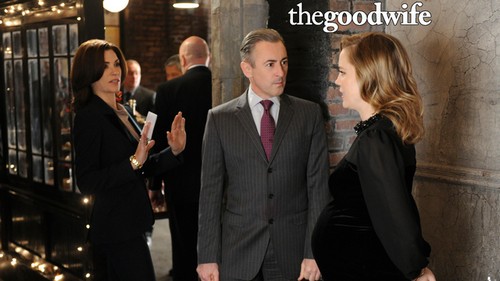 The Good Wife returned tonight to CBS with another great episode.  I cannot wait till the next episode, sadly we have to wait two weeks the episode is preempted for one week and will return April 13th, 2014.  To wet your appetite we have a sneak peek video and some insight for you below on what is going to happen on the next episode called, “A Material World.”

On tonight’s episode Matthew Goode returned as Finn Polmar, Star Prosecutor in the State’s Attorney’s Office.  Alicia searched for answers as she tried to make sense of Will’s death in the aftermath of the courthouse shooting. Meanwhile, Diane deliverd the somber news to the partners at Lockhart/Gardner who had to decide how to move forward.  More happened!  If you missed the episode we have a full and detailed recap, right here for you.

Spoiler alert: If you’re one of those people who doesn’t like spoilers, stop reading now! We have some juicy spoilers for you about the season 3 episode 17 of CBS’s “A Material World.”

CBS’s Official Synopsis: “Alicia and Diane consider merging their firms in the wake of Will’s death, even as they find themselves on opposite sides of a contentious divorce suit. Meanwhile, Alicia offers assistance to Finn when it becomes clear that the State’s Attorney is looking for a scapegoat in the Jeffrey Grant case.”

The Good Wife Season 5, Episode 17 “A Material World” airs on CBS on April 13th, 2013. Check out the preview video from episode 17 below and let us know in the comments below what you think!