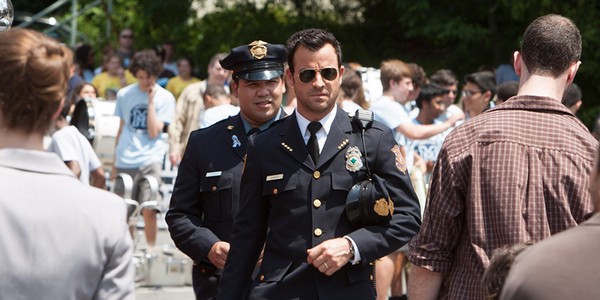 Tonight on HBO is the much anticipated season 1 premiere of THE LEFTOVERS. Tonight’s episode is the “Pilot” and on tonight’s episode, police chief Kevin Garvey tries to maintain a sense of normalcy in his strained community.

For those of you not familiar with the show, The Leftovers is based on Tom Perrotta’s bestselling novel of the same name. The drama series takes an original look at The Rapture… because it’s not entirely clear The Rapture happened.

On tonight’s show, an adaptation of Tom Perrotta’s novel about life in a small town after many of its residents vanished in a Rapture-like event begins with the upcoming third anniversary of the “Departure” and a police chief’s personal and professional struggles.

Tonight’s season 1 premiere episode is going to be an exciting one, which you won’t want to miss. So be sure to tune in for our live coverage of HBO’s The Leftovers season premiere tonight at 10 PM EST!

On tonight’s premiere episode of “The Leftovers,” the world is left to recover after suffering through “The Departure”. One day loved ones both young and old disappeared for no reason at all and even after three years there still aren’t any answers to the how or why. And so life was forced to go on albeit a little differently.

A sign of this would be open prayer allowed in public schools. It seems when two percent of the population disappeared the ones they left behind turned to religion for answers. While others decided to try an old and familiar take on communal living. In this case that’s when a group of people share the same room and takes shifts on who would be on the lookout and who would be allowed to sleep. Not that religion is escapable there either.

When they couldn’t find the answers to this epidemic then even congress found themselves open to discussing the theological. So in accordance with the times cults were soon born. The Remanentes is one of those groups. They were formed about two years into the disappearance. Not much is known about them but what is out there is that they love to cause a disturbance.

In a small town called Mapleton in America the people have come together to start a Heroes Day in honor of those that went missing. The Mayor believes this is the only way to help people grieve and yet she refusing to listen to her very concerned Sheriff on safety precautions. Kevin Garvey took on this job after his father vacated it and so a lot of people are hesitant to take him seriously. They’re still waiting for him to prove himself while at the same time never giving him a chance.

Garvey warned the Mayor that The Remanentes were going to make an appearance at Heroes’ Day and she chose to ignore him. And more than that she went on to overrule when he advised the council to cancel the services.

Then, despite his job being a complete farce, Garvey had to return home to a very angry daughter. Jill hasn’t been the same since her mom left. She’s been moody and sometimes volatile. Though that’s kind of how most of the kids her age have turned out. When they’re not participating in ridiculous parties, based off of a game that can either lead to sex, drugs, self-mutilation, or sometimes even assault, that is.

This is what happened to Jill personally because her mother left her on purpose. Most kids lost someone because of the mysterious outbreak, but Jill’s mom chose to live among other weirdoes that use their spare time to stalk and harass others.

One of the people she chose to follow on the night her daughter choked someone because of a sex game was Meg and her fiancée. They stayed outside of Meg’s home just creepily watching. Though it did turn violent. When Meg finally had enough of being watched she went right up to Laurie and punched her.

Unfortunately, for the Garvey family, Laurie isn’t the only one to join something without thinking about others. The prodigal son, Tom Garvey, has also signed up for a cult. Under orders from the prophet Wayne, Tom normally brings people to him. These people supposedly find the answers with Wayne that not even their government could provide. So that’s all Tom did. He dropped people off but during these drop-offs he would chat up one of the girls that got to stay there. Hence he found himself threatened by their leader. Wayne paid him a personal visit in order for Tom to truly understand how important that he doesn’t touch any of the girls staying on the compound.

And with a few waves of a knife, Tom learned his lesson! But which cult out of the two given examples are the most dangerous?

The parade for Heroes’ Day went through without any mishaps. Then, later on, during the speeches from the people that lost family, Laurie Garvey and her friends showed up. They had signs saying “Stop Wasting Your Breath” as if it was their right to tell people how to feel, much less remember, who they lost. And so the good citizens of Mapleton became angry.

Angry enough that they attacked the protestors who for the most part didn’t fight back and so a riot quickly ensued. Just like Kevin had predicted would happen way back at the council meeting.

Afterwards, he got drunk and thought it would be a good idea to try and visit his wife. He stopped by one of their houses and pleaded with Laurie to come home. And still she stayed with her newfound friends. But once he was forcibly removed from the premises – someone else stopped by. Meg, the lady that snapped earlier, came to the house and asked to stay. Apparently, she’s been converted.
If you can’t be them, join them!

Cults, Hedonistic teenagers, and a Big Mystery that could either be God, the Devil, or Aliens – yeah not bad for the first episode! Let’s see what happens next week!