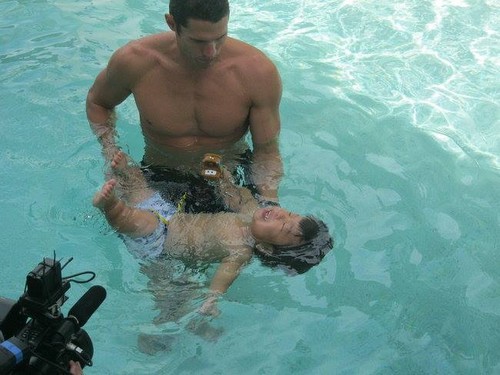 Tonight on TLC The Little Couple returns with an all new Tuesday December 16, season 7 episode 3 called, “First Week of School,” and we have your recap below. On tonight’s episode, the first day of preschool gives Jen Arnold a chance to take some memorable photos

On the last episode, Will and Zoey love their devices and are highly skilled at using technology. But Jen and Bill wanted the family to take some time away from their handheld screens so they headed to Jen’s favorite beach in Galveston. Did you watch the last episode? If you missed it, we have a full and detailed recap right here for you.

On tonight’s episode as per the TLC synopsis, “The first day of preschool gives Jen a chance to take some memorable photos. Later, the kids take swim lessons, but Zoey is a slightly slower learner than Will.”

Previously on the “Little Couple”, Jen was feeling nervous about returning to work. She didn’t know how she was going to handle her job and two young kids. But thankfully school has finally begun for Zoe and Will.

It’s preschool so the kids won’t be too tasked. And truthfully the only problem they’ve encountered so far is the height of some of the toilets and desks at school. So Bill took care of that. He reached out to a couple of friends of his and he got them to build foot stools to help the kids adjust.

So, really, everything is taken care of and the rest is kind of up to the kids at this point. Though Will has been showing a little bit of a rebel side lately. Nothing too bad that its gotten out of hand but he’s hit that awkward toddler stage where he wants to be a big boy and yet continues to throw tantrums.

Like the time Will snuck into the cupboard when his parents weren’t looking and took out a snack even though he had just finished breakfast. Jen hadn’t liked that. And she probably would have risked him throwing a fit if it hadn’t been the first day of school for him. At the time, she was merely thinking about getting him into the car and she didn’t want to hurt her own cause by upsetting him.

Then, once the kids were all huddled off, Jen went to work. She had a case involving a premie and she had to teach a parent what to do (exercises included) if the woman’s son suddenly stopped breathing. And it was wondrous thing to see a parent pick these things up so easily. It made Jen feel happier about allowing the mother and son to go home together.

However, weekends eventually roll around and when they do it means the kids have their swimming lessons.

Will loves his swimming lessons. And in fact he’s a daredevil when it comes to it. He loves to push himself to swimming longer or diving deeper which tends to scare his parents. But his sister on the other hand only wants to swim when she feels like it.

Zoe is sometimes excited about swimming and at other times – she acts like Jared the swimming instructor wants to drown her. So depending on the day she can either be pleasant or put up a fight. Her mood is simply that interchangeable.

Then again she’s still a baby!

After their swimming lessons, peace once again reigned at home. The kids had worked up an appetite with their swimming so the family all had lunch together. And because lunch is the kids’ favorite part of the day – Jen decided to ask them some questions while their guard were down.

Subsequently, Jen wanted to know how school has been for the kids and as it turns out Zoe surprisingly likes school. She seems to be just fine with going. Her brother though is the one having a tough time adjusting.

Will’s teacher had informed his parents earlier that he’s been crying everyday. Particularly after the drop-offs. And it’s gotten so bad, he’s called out for both his parents when usually he only asks for his dad. So Jen and Bill think his recent shy behavior might have something to do with his orphanage. After all, Will remembers his time at the orphanage and, regardless of it being a happy place for him, he probably remember the upheaval of leaving everyone he knows.

So school might be bringing up ugly memories and Will’s parents are doing their best in trying to find a way how to help their son.

Later, Jen and Bill treated the kids to couple of presents they’ve haven’t been able to use thus far and that appeared to cheer Will up some. Will and his dad both share a love of cars. And someone had gifted the kids their own little vehicles. Now, typically, parents wouldn’t be able to catch a ride with their kids but this time Bill’s height worked in his favor and he got to race Will across an emptied out parking lot.

So everyone ended up having fun. Including Zoe who would sometimes complain and sometimes cheer on her brother. But there’s still some things this family has to deal with in the near future. Will’s adjustment to school and Bill’s upcoming surgery on his back.