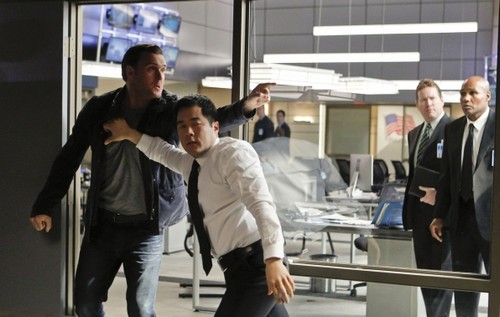 Tonight on CBS THE MENTALIST returns with a brand new show.  On tonight’s episode called, “White As The Driven Snow,” Grace is kidnapped by the killer who has been hunting former CBI members.

On last week’s episode a homicide at an oil-fracking site was investigated by Jane and Fischer. Elsewhere, the hunt for suspects who were attacking ex-CBI members led Rigsby and Van Pelt to Austin.   On of the best moments of the episode was in the first few minutes of the show we found Rigsby, Van Pelt, and their daughter Maddy at home in San Francisco.  It was a  pretty cool sequence.  Did you watch last week’s episode of THE MENTALIST? If not we have you covered with a detailed recap of the episode right here.

On tonight’s episode Van Pelt gets abducted by a killer who is pursuing former members of the CBI, and the top suspect’s alibi appears to be solid. Jane then uses all of his skills to try to find her before it’s too late.

Tonight’s The Mentalist Season 6 episode 15 is going to be exciting, and you won’t want to miss. So be sure to tune in for our live coverage of The Mentalist — tonight at 10PM EST! While you wait for our recap, hit the comments and let us know how excited you are about this season of The Mentalist.  Check out a sneak peek of tonight’s episode below!

Kim goes to speak to Richard’s attorney saying that they need a little more time; the attorney says there is now reason to have Richard being held at the HQ. Kim tells her that they all know that he kidnapped Grace, that they won’t let him go because he’ll end up killing her. The attorney says to Kim it’s her job and that she’s paid to do it, she’s extremely rude towards Kim. Grace is running around in the snowy forest, looking for someone outside, SUV appears out of nowhere and it was the one seen in the picture; it pulls up to Grace and a woman is inside of it.

Grace asks for a phone, it turns out that there’s no service. Grace wants to call the cops, she asks if she’s got a working phone somewhere and the woman mentions her cabin; which could be where she just escaped. Wally tells them all that Richard has a sister named Hazel, who Grace could have just met. Grace is in the car with the woman, they pull up to a cabin out in the snows, and it’s not the same that Grace escaped out of. They enter the cabin and the woman says she’ll go get the phone, Grace mentions how theirs no electricity and that it’s not possible to have a phone. The woman comes back with a gun and points it at Grace and says she has no phone and lied. Grace now has her hands bounded, it turns out the woman is Hazel because she mentions how she’ll have to wait for Richard so he can deal with Grace.

Grace asks for something hot to drink because of how cold it is, the woman is reluctant because she doesn’t want her to pull any tricks. Grace talks to Hazel asking about her and her brother, if they’ve got more siblings which they don’t; Grace then brings up that Richard and Hazel must have had a hard upbringing. Hazel talks about how their mother ran out on them, left them with a drunken father who would beat Richard and Hazel couldn’t do anything to protect him. Grace says that she couldn’t do anything because of being a young girl then; Hazel gets pissed off by her sympathy and doesn’t want it. Richard is with his attorney, he tells her that he wants Patrick to suffer; their car is stopped and Wayne enters the car with Patrick being their driver.

Abbot tells Kim to go find Wayne and Patrick, Patrick and Wayne wants the attorney to leave; he gives her the drivers coat and hat to her. Patrick and Wayne are now with Richard in the car; Grace is talking to Hazel telling her personal life. Grace mentions about how she’s got a daughter, she’s trying to buy time while trying to break what’s around her wrists. Hazel notices what Grace was doing, she gets pissed off and hits her with the gun, and then she wraps duct tape around her wrists and puts a strip on her mouth.

Wayne is beating up Richard in the back of the car while Patrick is driving, Wayne throws him out of the car; Patrick sees this and stops the car. Wayne gets out of the car and punches Richard in the face, and then he pulls out his gun and shoots next to him to scare him. Wayne gets very pissed off and pours gasoline all over Richard and takes out a flare, Wayne was so angry he dropped the gun. Richard has the gun now and tells them to both get in the car at gunpoint, he’ll satisfy their curiosity of where Grace is.

Cho, Teresa and Kim want to try and find Patrick and Wayne; Wally tells them that they could be in New Mexico because Richard had grandparents there; he also found out that Hazel has a PO box in Santa Fe. Richard has Wayne and Patrick enter the cabin where Grace was in, she’s not there; Richard tells them to get back in the car and that he’ll find her. They drive off from the cabin; Grace is sitting in the chair and hears a beeping sound which means Richard is coming.

Teresa shows Abbot files proving that they’ve found where Richard and Hazel have Grace, Abbot says he’ll call a chopper and that they’ll be there in an hour. Richard, Wayne and Patrick arrive at the cabin where Grace and Hazel are. Richard tells them to get out of the car; Wayne says no and tells him he won’t let Richard get away with what he’s done. Wayne tells Richard to shoot him because he’s not going to do it, Richard shoots, but the gun is unloaded. Wayne takes the gun and loads. They now have the upper hand, Wayne tells Richard to call for Hazel to come outside and let Grace go. Hazel goes to look outside a window to see, Patrick asks Richard to call for Hazel again.

Hazel isn’t showing, they hear Grace inside from where they’re standing. Wayne and Patrick walk into the house slowly looking around, Wayne sees Grace and asks where Hazel is. Wayne takes the duct tape off of Grace’s mouth, Grace shouts behind him; Wayne was too late and is shot, Richard takes the hand gun and shoots Wayne also. Richard takes Patrick outside along with Hazel who has Grace with her. Richard wants to ask Patrick questions, have a quiz game and for each answer he gets right he keeps a finger. Right before Richard is about to cut off Patrick’s finger, Wayne appears from behind and knocks Hazel to the ground, grabs the gun and shoot Richard in the chest.

Now Wayne is in the hospital, Teresa, Patrick, Cho and Grace are there with him comforting him. Patrick and Teresa were about to leave when Abbot and Kim arrive. Kim brought flowers, she wanted to see how they were doing and Abbot lets them know how impressive they are. Abbot lets them know that they have a place in the FBI if they ever want to get back into it, Wayne and Grace are thankful for the offer, but don’t want to go back to that life. Cho leaves, to leave them both alone. Teresa is talking to Patrick about how angry she is at him for abducting Richard.