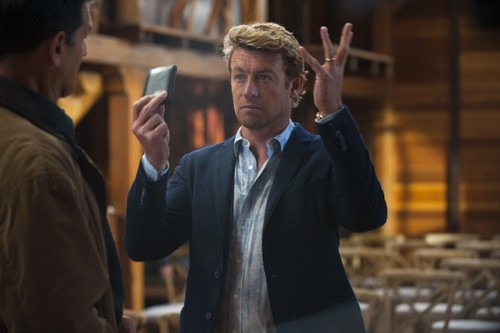 Tonight on CBS THE MENTALIST returns with a brand new show.  On tonight’s episode called, “Forest Green” Jane rubs elbows with the rich and powerful when a killer hides at an elite Men’s-Only club.

On last week’s episode a death-row inmate needs Jane’s help to prove he’s not guilty, and time was of the essence because the prisoner was scheduled to be executed in two days.  Did you watch last week’s episode?  We did and we have a full and detailed recap right here, for you.

On tonight’s episode a woman’s body is discovered near an affluent men’s club, so Jane hobnobs with some upper-crust men in an attempt to find the murderer.

Tonight’s The Mentalist Season 6 episode 18 is going to be exciting, and you won’t want to miss it. So be sure to tune in for our live coverage of The Mentalist — tonight at 10PM EST! While you wait for our recap, hit the comments and let us know how excited you are about this season of The Mentalist.  Check out a sneak peek of tonight’s episode below!

RECAP: Patrick and Teresa go out to go to see a dead body out in the middle of the forest,  Patrick and Teresa arrive at where the dead body is; the girl who called them about the dead body tells them that the woman came from a club. Patrick knows that the woman was most likely murdered and wasn’t doing any form of hiking at all; Patrick goes the club and rings the door bell, telling them that the killer is within. Patrick and Teresa are being shown around the club; the president introduces himself and tells them about the organization. Teresa asks if women are allowed as guests in the club, he says that not normally; their members are mainly senators, CEOs and others. In the club there are no distractions from the outside world. The club is called The Foragers; Teresa asks how the girl Jane got on their property. Patrick says that the woman was killed on The Foragers property; he tells him that she was killed by a pin; something like the pins that you need to wear to walk in as guests in The Foragers.  Patrick says he can’t promise Teresa hurting someone, joking around a bit. The president talks about how a speaker is going to be showing up to talk about technology tomorrow, Teresa demands to have the names on the guest list. Two men show up, there’s a problem between them; one named Marvin was found using his cell phone on the grounds of the club, which he isn’t allowed to. It cuts to HQ, Abbot is asking Cho if they’ve found anything on the case; Kim appears and says that they’ve found a copy of her driver’s license. Abbot tells them to let Patrick and Teresa to know. Teresa goes and gets a folder with the guest list, Teresa asks the man who handed her the folder if he know anything about the girl. He says that he doesn’t. The man tells Teresa that she’s barking up the wrong tree, making him look suspicious. Marvin is on his phone arguing with a man named Alan; Patrick appears and says he won’t talk about it. Marvin says he has nothing to talk to with Patrick because he’s of the police; Patrick corrects him saying that he’s not of them, but with them. Patrick asks if any of the women who work at the club leave the dining hall and go anywhere else around the club, Marvin says no. Kim and Cho are talking to a relative of the woman Jane who died, it seems that she was a hard worker and sent a video to her sister Madison. They ask if Madison had a boyfriend that snuck her in, but it turns out she was gay. Patrick talks to Teresa about Pike and if she’s doing well with him. Teresa says its fine; Patrick says he deserves a nice man. Patrick then says his fork is dirty, the woman comes closer to him and offers him another; Patrick smells her hair. Teresa finds it weird, Patrick tells her that Madison must be staying with a woman at the cabin because of being gay and that she must have borrowed shampoo from someone. Turns out one of the woman working at the club did have a thing with her, turns out that Madison was an escort; she kept it quiet so her sister wouldn’t find out. Turns out that Madison was there to meet with a male client.

They are interrogating the president of The Foragers, asking about the brothel called the Fishing Camp; turns out that it are located near The Foragers. He admits to seeing Madison once or twice, but never spoke to her. Patrick arrives in a golf cart with Abbot; they arrive at The Fishing Camp where Teresa is near. Patrick believes that Madison never died in the cabin, Patrick mentions that there are many golf karts around and that the body could have been transported. Patrick finds golf ball warmer, Patrick believes that they can narrow down the search. Abbot and Patrick introduce themselves to a golfer; they found something that belongs to him at Madison’s cabin. Abbot says that he shouldn’t lay the golfer Grant admits to going to The Fishing Camp, but is married. Greg his attorney arrives and says that he won’t say anything. Patrick says to Greg that he’s frisky, Abbot then mentions that they were only talking to Grant and that his help would be needed to find the killer. Patrick says that Greg isn’t a part of The Foragers, and mentions how his collar is fayed. Abbot tells Teresa to get as many guys up here to search around, it seems that a golf cart was found and it was washed an hour ago. Marvin arrives; he wants to talk to Abbot; to have a minute of his time. Abbot agrees and follows Marvin, Marvin says he made a couple of calls and talks about how Patrick was charged with murder, but is allowed to work because of a deal he made with Patrick. Marvin says Matthews whose of the FBI isn’t helping him, he’s trying to offer a bribe of some sort to help get him out of some trouble. Abbot says he’ll get back to Marvin and leaves. Pike calls Teresa, they talk about having dinner together another time until she gets back. Pike gives some helpful advice and hangs up. Teresa and Abbot find a golf cart with someone sitting it, they walk up closer armed and ready for the worse outcome and it turns out that Gill the man who gave Teresa the folder with the names of the people on the guest list is dead.

Patrick asks if anyone at the club knows Gill is dead, it doesn’t seem like they’ve mentioned anything yet. Abbot says that Marvin is bribing him, he wants to record him talking about to nail his ass; but Patrick says that they could do something better instead. Cho arrives to HQ; he goes to talk to Wiley and wants him to something. He needs Wiley to leave a trail of electrons to make it looks like they’ve sent a ton of assets. Marvin meets with Abbot, Abbot tells him that he probably wants to use his assets; Marvin asks if he’s got a wire on. Abbot says he doesn’t and that the price is 30%, Marvin says 20%, but Abbot isn’t going to accept 20 and wants 30. Marvin agrees with 30, Abbot Goes on his phone and plays around with it, he then tells Marvin he’s free and to check his accounts. Marvin checked the website; he fell for Patrick’s trick. Patrick is talking to the president again; he says that the speaker can’t get into the camp because of the police’s road bloc. Patrick says that he used to be a magician and that he was really good at it, he offers to entertain the audience for a while as forgiveness. The president says that it would be okay to do, that they’d be interested in that. Patrick meets up with Abbot and Teresa, she hands Patrick Madison’s phone; it seems she recorded a message of herself. Patrick says that he will do a routine on stage, and Madison’s phone will be one of the props to lure him out.

Patrick is on stage performing magic tricks, the audience are really enjoying it. Patrick asks Teresa to get on stage to help him, he mentions four members to go to the lost and found box to seal items in a box. Patrick will try to identify each object as Teresa holds them up. Patrick is blinded fold and ready to go. Patrick guesses all the objects in the box, when the phone is brought out no one in the audience looks worried about it. Abbot looks in the box to see that the phone wasn’t taken at all, he goes back to a cabin; he knows that there is a camera in the room. So that someone could blackmail Madison, he says that because of the camera he knew not to take the phone. Abbot gives the culprit ten minutes to show himself, turns out that it was Grant’s attorney Greg. Greg asks about the deal, but is arrested when trying to run away. Turns out that Greg was going to blackmail Grant with having footage of him and Madison being together. Greg says that he made a deal to put the camera in the cabin, though Madison arrived to early and caught Greg planting the camera in the room; he chased her to stop her, but ended up killing her. Greg asks if the phone thing was a trick, he then finds out that Marvin was arrested also. Teresa is with Pike out for dinner, they’re having a great time; until Pike breaks some news that he’s getting a promotion and that he needs to run it from DC. Meaning that Pike would need to move, he wants to decline to be with Teresa. Teresa tells him not to turn down the job, because he might never get the opportunity like this again. Pike asks if Teresa would go with him, because he wants to have a serious relationship with her.