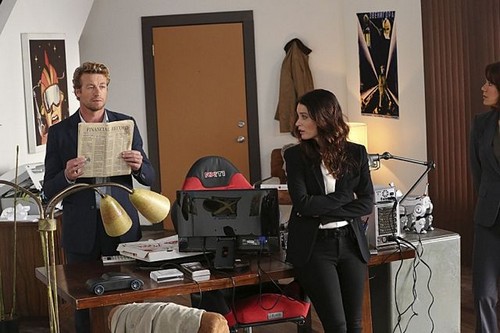 THE MENTALIST returned tonight after the mid-season winter hiatus.  I cannot wait to see next week’s show.  Good news, we have a sneak peek video and some insight for you below on what is going on next week’s episode 12, “The Golden Hammer.”

On tonight’s show the FBI was tasked with finding the killer of several DEA agents, and Jane went on a date with a beautiful woman associated with the case. Did you watch tonight’s show?  We did and we recapped it right here for you.

Spoiler alert: If you’re one of those people who doesn’t like spoilers, stop reading now! We have some juicy spoilers for you about the season 6 episode 12 of CBS’s “The Mentalist.”

CBS Official Synopsis: “Jane and the FBI will investigate the murder of a high-tech cartographer who may have unearthed a spy ring before his death. In the meantime, Rigsby and Van Pelt will find themselves on the trail of an alarming conspiracy.”  Navid Negahban (“Homeland”) will guest star as Hassan Zarif, a man with information about the cartographer’s death.

The Mentalist Season 6, Episode 12 “The Golden Hammer” airs on CBS on January 12th, 2013. Check out the preview videos from episode 12 below and let us know in the comments below what you think.