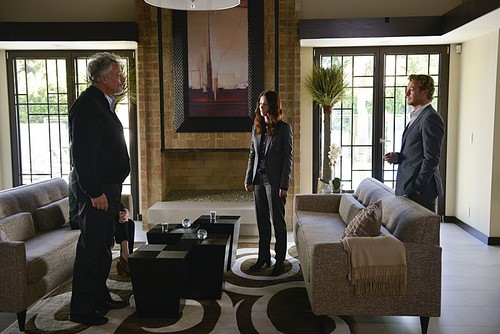 THE MENTALIST returned tonight with another new episode and on it Pike informed Lisbon of his job offer problem is it is in DC.  If you cannot wait till next week’s episode, good news, we have a sneak peek video and some insight for you below on what is going on next week’s episode 19.

On tonight’s episode a woman’s body was discovered near an affluent men’s club, so Jane hobnobed with some upper-crust men in an attempt to find the murderer.  More happened!  Did you watch tonight’s show?  We did and we recapped it right here for you.

Spoiler alert: If you’re one of those people who doesn’t like spoilers, stop reading now! We have some juicy spoilers for you about the season 6 episode 19 of CBS’s “The Mentalist.”

CBS Official Synopsis:  “A chance encounter with a suspicious-looking individual leads Jane and Lisbon to uncover a vast human smuggling ring. Meanwhile, Lisbon remains tempted by Pike’s offer to move to D.C. with him.”

On next week’s episode Jane unearths a human-smuggling ring after he encounters a curious-looking stranger. Meanwhile, Lisbon ponders moving to Washington, D.C., with Pike.  The episode was written by Eoghan Mahony and Mike Weiss, and it was directed by Sylvain White.

The Mentalist Season 6, Episode 19 “Brown Eyed Girls” airs on CBS on April 27th, 2014. Check out the preview videos from episode 19 below and let us know in the comments below what you think.