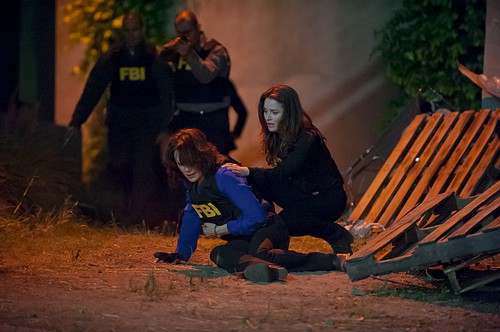 On tonight’s episode a chance encounter with a suspicious-looking individual led Jane and Lisbon to uncover a vast human smuggling ring. Meanwhile, Lisbon remained tempted by Pike’s offer to move to D.C. with him.  More happened!  Did you watch tonight’s show?  We did and we recapped it right here for you.

Spoiler alert: If you’re one of those people who doesn’t like spoilers, stop reading now! We have some juicy spoilers for you about the season 6 episode 20 of CBS’s “The Mentalist.”

CBS Official Synopsis: “Jane’s freedom is at stake when a grand jury is empanelled to decide if he should be tried for the murder of Red John. Meanwhile, Lisbon tries to find out how Jane feels about the possibility of her leaving Austin with Agent Pike, and Cho and Abbott follow new leads in the human smuggling ring they recently uncovered.”

On next week’s episode a grand jury is convened to review Red John’s murder and determine if Jane should be tried. Meanwhile, Lisbon wonders what Jane’s reaction would be if she relocated with Agent Pike; and Cho and Abbot track some new leads in the human-smuggling ring.  The episode is written by Daniel Cerone and Erika Green Swafford.

The Mentalist Season 6, Episode 20 “Il Tavolo Bianco” airs on CBS on May 4th, 2014. Check out the preview videos from episode 19 below and let us know in the comments below what you think.