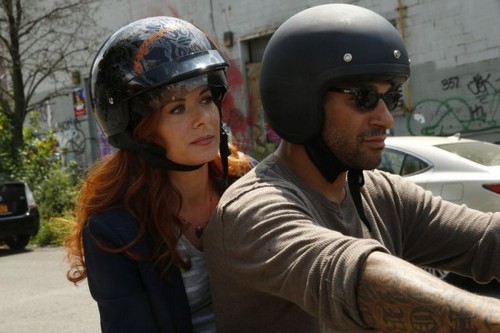 Tonight on NBC The Mysteries of Laura airs with an all new Wednesday October 1, season 1 episode 3 called, “The Mystery of the Biker Bar.” On tonight’s episode a popular biker-bar owner is killed, and the case takes Laura and Jake to a memorable location: the place where they had their first date. Meanwhile, the twins can’t outwit their new ex-con babysitter, but just to be sure, Laura has Max spy on them.

On the last episode, when an online hook-up ended in murder, Laura (Debra Messing) created her own dating website profile and – under Billy’s (Laz Alonso) watchful eye – used herself to bait the killer. While Laura went undercover at Manhattan’s hottest night spots, Jake (Josh Lucas) finally inked the divorce papers, prompted Laura to reconsider the dating scene for real. Did you watch the last episode? If you missed it, we have a full and detailed recap right here for you.

On tonight’s episode the beloved owner of a biker bar is found dead, leading Laura (Debra Messing) and Jake (Josh Lucas) to return to the site of their first date for the investigation. Meanwhile, the twins have met their match with their new ex-con babysitter, but Laura sends Max (Max Jenkins) on a secret mission to check up on them just in case.

We will be blogging The Mysteries of Laura season 1 episode 3 with all the up-to-the-minute details at 10PM EST so make sure to come back to this spot and watch the show with us. Make sure to refresh often so you get the most current info! In the meantime, sound out in the comments and let us know what you think of the series.

RECAP: Tonight’s episode of Mysteries of Laura begins with an old man sitting on a dock in the dark fishing, after he catches a fish he throws his arms up in victory, and someone shoots him in the chest.

Laura wakes up in the morning and finds her window open, she thinks there is an intruder and pulls her gun out, she realizes it is her sons playing with slingshots that their dad bought them, and hides her gun behind her back. While she is yelling at them, the neighbor shows up and is furious because they broke his window with a baseball.
Billy calls Laura and says that there was a homicide at the pier and her business card was in his pocket. She arrives at the scene and is shocked to see that the victim is an old man named St. Jerry, he owned a bar that she frequented when she and Jake were in the police academy. Jake arrives and hugs Laura and comforts her, then she freaks out when she catches tourists taking selfies with Jerry’s dead body in the background. She vows to catch whoever killed him.

Jake and Laura head to Jerry’s bar and break the news of Jerry’s death to the bartender and his wife Ruby. They tell her the bar looks great, she confesses that there is a “code-bomber” who keeps calling code enforcement on the every day. She has no idea who it is though. They ask if anyone had motive to kill Jerry. The only person they can think of is Crazy Eddie. Jerry used to let him sleep in the storage room but he stopped taking his meds and went crazy, so Jerry kicked him out.

Laura and Billy find Eddie’s cardboard box on the street, they show him their badge and begins freaking out and says that they are coming for him and he can see them circling. He pulls a gun out and Billy tackles him and wrestles the gun out of his hand.

Laura takes Eddie in for questioning, and he begins stuttering and rambling that Bird Man is watching them. Laura tells Bill to go get flashlights, coatracks, and blankets. She builds a fort like her kids’ in the interrogation room and tells Eddie that no one can find him because they are in the safety zone. Eddie buys it and stops rambling and Laura started talking about Jerry. Eddie says that he loved Jerry and he treated him like a man, he starts crying because Jerry is dead. Eddie says he “knows stuff” and says that Bird Man was evil and he hated Jerry and was always spying on him. He says that Bird Man knows he is talking to the police and cries that Laura can’t let Bird Man get him.

Laura sends Max to check on the boys because they are with their new babysitter, the girl that was arrested for staging a protest against her slumlord. She isn’t exactly thrilled that Laura doesn’t trust her.

Jake is annoyed because Laura sent their only suspect to the psych ward, she argues that her gut is telling her Eddie is innocent and the gun he had isn’t even the same kind that killed Jerry. Laura gets a break when they track down all of the complaints to code enforcement, and learn it was a bird-watcher that lived across the street from Jerry’s bar, and his name is Cyrus.

Laura and Billy head to Cyrus’s house to question him about Jerry’s death. Jerry admits that he filed complaints about Jerry to the city code enforcement and the liquor board. Jerry has kept a log of every single transgression and violations, Laura takes the list and promises to forward it to the mayor. Eddie has an alibi, so Laura heads back to the station to read through Cyrus’s journal. Laura finds an entry in Cyrus’s book claiming that there was a screaming match in front of the bar last week. They play back the 911 tape from when Cyrus called the cops on them and hear a woman screaming at Jerry and swearing she will kill him. They play the recording for Ruby, and she says that the woman is their ex-waitress Faith. Jerry just fired her because she kept stealing from the bar.

Laura and Billy head to the new bar that Faith works at question her, Laura notices that she is covered in bruises and asks Faith if she is covering for her violent boyfriend. A guy at the bar starts running as soon as he sees Faith talking to the police, and Billy chases after him. He is hit by a bus while riding away on his motorcycle and rushed away in an ambulance.

Jake pays Faith’s boyfriend a visit in his hospital room, he insists he didn’t kill Jerry. He has an alibi, he was busy stealing a range-rover from the mall parking lot.

Laura’s baby-sitter quit because she was tired of Laura sending people to check on her, so she got decked out in her leather jacket and drags her kids with her to Jerry’s wake at the bar. Jake shows up and Ruby pressures them to dance together because Jerry would have wanted to see them together. Laura is shocked to see Crazy Eddie at the wake, back on his meds, and all cleaned up. He informs her that Jerry gave him the suit, Laura finds a pieve of paper in the pocket of Jerry’s suit with the name of a notorious loan shark, “Flaco.”

Billy heads to the pool hall to see Flaco, he admits that he loaned Jerry money, but Jerry settled the debt plus interest. Flaco says that Jerry wasn’t broke, he got a silent partner that settled his debt. Jake fills Ruby in, but she is confused she has no idea who could have bought out half of the bar. She thinks it might be one of the Wallstreet guys that come in. Laura finds a limo license plate number in Cyrus’s book and they trace it to a billionaire named Lloyd Cramer. He’s trying to build a project on the street where Jerry’s bar was and he needed Jerry to sell before they could break ground on the skyscraper.

Laura and billy kidnap Lloyd in his limo, and take him down to the pier where Jerry was shot and killed. They checked the city records and realized that Lloyd bought half of the air rights to his bar. Lloyd explains to Laura and Billy that he tried to get Ruby and Jerry to sell their air rights because they could make millions. But, Jerry refused to sell the other half. Laura has an epiphany and heads back to Jerry;s bar, she asks Ruby why she killed Jerry over the air-rights. Ruby admits she did, she was tired of Jerry giving away everything they owned, she spent years with Jerry and she deserved something. It broke her heart to shoot him, but she had to take care of herself. Laura tells Ruby she is under arrest for the murder of Jerry Patch.