The Mysteries of Laura Recap 10/15/14: Season 1 Episode 5 “The Mystery of the Terminal Tenant” 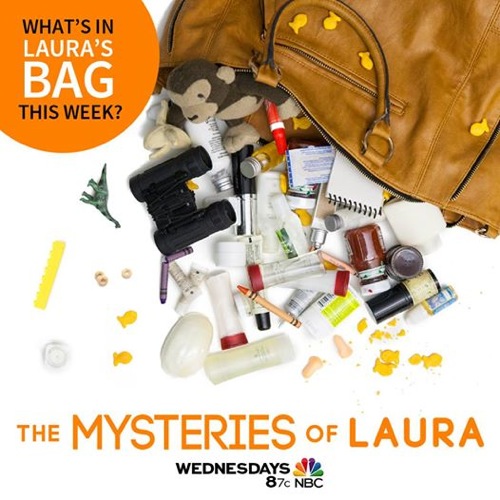 Tonight on NBC The Mysteries of Laura continues with an all new Wednesday October 15, season 1 episode 5 called, “The Mystery of the Terminal Tenant.” On tonight’s episode an unidentified body is found in the bathroom of a home that is not his own, so detectives try to figure out who the victim is, as well as uncover his killer. Meanwhile, Laura and Jake’s problems with joint custody lead them to try nesting.

On the last episode, when a powerful congressman’s campaign was tainted by a sex scandal, the NYPD brass tasked Laura (Debra Messing) with finding out the truth behind the alleged mistress. But when surveillance went awry, the 2nd Precinct team had to delve into the online gaming world to shut down a well-connected killer. Did you watch the last episode? If you missed it, we have a full and detailed recap right here for you.

On tonight’s episode the team finds the remains of a body that appears to have been killed in his own bathroom, but when the homeowner shows up alive and well, the detectives not only find themselves on the hunt for the killer, but must also determine who the victim is. Meanwhile, Laura (Debra Messing) and Jake (Josh Lucas) try out “nesting” as a solution to their shared-custody struggles.

We will be blogging The Mysteries of Laura season 1 episode 5 with all the up-to-the-minute details at 10PM EST so make sure to come back to this spot and watch the show with us. Make sure to refresh often so you get the most current info! In the meantime, sound out in the comments and let us know what you think of the series.

Tonight’s episode of The Mysteries of Laura kicks off with an elderly woman opening a shower curtain and finding a tub full of blood and bones, she faints on the bathroom floor.

Laura is getting her two boys ready for their overnight visit with their dad Jake, they whine that they don’t want to have to sleep on his sofa bed and think he should stay at their house. Laura heads to work and informs Jake that from now on if he wants to see the boys on the weekends then he has to come to her house, she has booked a hotel for the weekend. He agrees and tells her she has body on 6th and Avenue A.

Laura arrives at the crime scene, the bathtub full of blood. The apartment owner was a man named Mark Harris, the ME tells her the body has been soaked in chemicals and it could take him weeks to ID it. Billy is in the living-room interviewing his neighbor Mrs. Greenburg, she says that Mark was a hermit until he met a girl named Corinne and then he became a social butterfly. The medical examiner says that there were multiple DNA samples on the possible victim’s bed.

They catch a break and pick up a fingerprint on a knife in Mark’s apartment, the ID belongs to a man named Carlo Carelli. Laura and Billy head to Carlo’s apartment where he is having a wild party full of half-naked people dancing. Carlo insists that he doesn’t remember Mark, he says he runs a party business called a “Very Chubby Affair.” Carlo says that he doesn’t know Mark, he just rented Mark’s apartment on a website called “NY Pad Exchange.” They hack in to the NY Pad Exchange website and learn that he has rented his apartment 84 times. The last person to rent his apartment was a porn star named Mark Roberts.

Laura and Billy head to Mark’s apartment, and searches for evidence of Cody Roberts. While they are searching the apartment Mark Harris and his girlfriend Corinne walk in, it’s safe to say Mark isn’t the person who’s body they found in his bath tub. Mark and Corinne reveal that they were in the Hamptons, they said they gave the keys to Cody on Friday and left, everything seems to be in place at the apartment, Cody’s clothes are still in the dresser.

Jake is watching the boys at Laura’s house, their playdate arrives with his mother Nora who reveals that she recently divorced her husband. Jake flirts with her and invites her in for pizza. They have drinks together and discuss their jobs while the kids play in the other room.

Laura and Billy find a note in one of Cody Roberts’ pockets, it’s an appointment card at a “Mommy & Me” class for tomorrow at 9:00 AM> Laura heads back to her hotel room and begins binging on snacks in her bed while reading magazines, she orders room service and a massage for herself. Then she heads to bed to watch TV and sighs that she is in heaven.

The next morning Laura and Billy head to Cody Roberts’ Mommy & Me class. They notice a woman pacing back and forth waiting for someone, she reveals that she is waiting for Cody because he was supposed to bring her crystal meth Laura brings the woman in for questioning, she says she was overwhelmed with motherhood until Cody showed up at class and offered her a sample of meth. She reveals that she never seen Cody, but he had a partner that worked at a rollerblade hut on the beach. You put $200 in your shoes in the locker and when you return there is a week’s supply of meth in your shoe.

Laura and Jake send an under-cover cop in to pose as a mom and rent rollerblades at the hut to bust Cody’s partner. Someone tips the dealer off and he runs down the beach and in to a house, Jake chases after him. The guy climbs out the upstairs window on to the roof just as the house explodes and sends Jake and the drug dealer flying. They arrest the drug dealer after the explosion, and when he realizes that they are police he is relieved, he was afraid that they were a drug dealer named Jimmy’s henchman. The dealer says he has no idea who Jimmy was, but he supposedly killed Cody because Cody wanted out of the business. Cody’s partner says that he used to pick meth up from a bodega downtown.

Laura and Billy head to the bodega in the ghetto, and spot two men coming out of the shop with bottles of liquid meth. Laura jumps out of the car and says she needs to confiscate their bottles, and one of the guys punches her in the face. Chaos ensues and back-up officers arrive and help them take the guys down.

Laura takes the guy that punched her in the face in to questioning and learns that he is actually an under-cover cop who is also trying to take Jimmy down. Jake checks out the under-cover cop’s story, and he is working for the DEA. Their two departments are going to work together to bring down Jimmy. The DEA worker asks Jake to set him up with Laura, and Jake tells him not to even think about it.

Jake is home with the boys later that night and Nora shows up on his doorstep and says she really needs someone to talk to. He pours her a drink and they sit down so she can rant about her ex-husband, who apparently told their son that she is fat. Laura texts Jake to check on the boys, but he doesn’t answer because he is busy with Nora. One of Jake’s kids come downstairs and wants to know why he is wrestling with Ethan’s mom on the couch.

The next day the DEA agent meets with Jimmy and his men to buy a large shipment of meth. While they move in and make the arrest, they realize that Jimmy is actually a woman. Jimmy lawyers up and refuses to talk to Laura and the cops. So, Laura brings in Mark Roberts, he said that he seen a woman in a black escalade outside of his apartment the day that Cody rented his apartment. Laura has Jimmy stand in a line-up and Mark ID’s Jimmy correctly. While Mark is ID’ing her Laura notices that he has a stutter, just like the soccer mom said Cody Roberts had a stutter.

Laura heads in to Jake’s office and says that Mark is actually Cody Roberts. Cody wanted out of the drug game so he killed Mark Harris and stole his identity, he knew that the police would think that the body in the bath tub was actually Cody Roberts. Laura has Cody’s dentist bring his records down to the police station, but is baffled when they don’t match the body. Billy tells her that her theory might be wrong and Cody Roberts really is dead. But, then they see a pamphlet form Mark Robert’s dentist and realize tha this girlfriend Corinne works at the dentist office. She actually switched his dental records so that he could steal Mark Harris’s identity without any evidence.

Mrs. Greenburg, Mark’s neighbor, shows up at the police station and says that someone stole her wallet. They think it may be Cody Roberts since he can’t use his own credit cards, they trace her credit cards and catch Cody Roberts and his girlfriend Corinne and arrest them for killing Mark Harris and stealing his identity.