The Mysteries of Laura “The Mystery of the Red Runway” Recap: Season 1 Episode 6 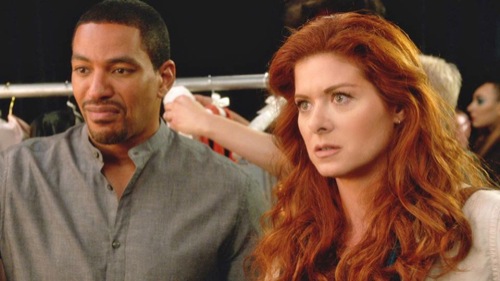 Tonight on NBC The Mysteries of Laura continues with an all new Wednesday October 22, season 1 episode 6 called, “The Mystery of the Red Runway.” On tonight’s episode a fashion designer’s intern is murdered, so Laura infiltrates Fashion Week, where the suspects include top models and knockoff sellers. Elsewhere, Jake reassess Max’s job.

On the last episode, the team found the remains of a body that appeared to have been killed in his own bathroom, but when the homeowner showed up alive and well, the detectives not only found themselves on the hunt for the killer, but must also determine who the victim was. Meanwhile, Laura (Debra Messing) and Jake (Josh Lucas) tried out “nesting” as a solution to their shared-custody struggles. Did you watch the last episode? If you missed it, we have a full and detailed recap right here for you.

On tonight’s episode our detectives head to NY’s Fashion Week to investigate the murder of a luxury designer’s gifted intern. Suspects range from supermodels to knock-off peddlers, taking Laura (Debra Messing) and Billy (Laz Alonso) from the runway to Canal Street and everywhere in between. Jake (Josh Lucas) reevaluates Max’s (Max Jenkins) position at the precinct.

We will be blogging The Mysteries of Laura season 1 episode 6 with all the up-to-the-minute details at 10PM EST so make sure to come back to this spot and watch the show with us. Make sure to refresh often so you get the most current info! In the meantime, sound out in the comments and let us know what you think of the series.

Tonight’s episode of Mysteries of Laura kicks off with Laura and Billy arriving at a crime scene. The officer on scene reveals that the victim is 22 year old Tyler Cole, and he was shot and killed around 5:00 AM. They come to the conclusion that it wasn’t a mugging because he still had his wallet on him. There’s a huge dog sitting next to Tyler’s body, her tag says her name is Greta.

Billy and Laura head to Tyler’s apartment and realize he is a clothing designer, their apartment is full of designs he is working on and tons of namebrand clothes. His roommate arrives and is shocked to hear that Tyler was killed. He reveals that he was a personal assistant for the famous designer Tom Burke. Billy receives a phone call and says the police couldn’t find any witnesses that saw Tyler get murdered, but they did find out that the dog Greta belongs to Tyler’s boss Tom Burke.

Billy and Laura pay Tyler’s boss Tom a visit, he says he worked for him for 18 months and he was all about the work and he stayed to himself. They ask why his assistant was walking Greta in the middle of the night, and Tom explains that they are swamped – it’s fashion week, everyone was up in the middle of the night preparing for the runway show. Tom excuses himself and gets ready to leave, and Laura notices that he puts on the same coat that Tyler was murdered in. She tells him that he can’t go outside, they think that whoever killed Tyler was actually trying to kill Tom. Tyler was walking Tom’s dog on Tom’s street and wearing one of Tom’s coats, the bullet he took was meant for Tom.

They bring Tom down to the police station and Jake questions him. Tom insists that no one would want to kill him, he did get in a fight with a violent model named Natalie Marquez after he cancelled her contract. Billy and Laura note that Natalie just happens to be in town for Fashion Week,. They head to a fashion show and track down Natalie, she has an alibi, but she says they should talk to Allison Torres because Tom screwed her out of 3 dresses for the Oscars.

Laura has to go pick up the boys, so Jake and Billy head to a photo shoot to see Allison Torres. She laughs that Tom Burke screwed her over, but that doesn’t mean that she killed him. While they are talking a man flees from the photo shoot and Billy chases him down and tackles him, once they search him they realize he has a gun on him, the same kind of gun that was used to kill Tyler.

They call Tom down to the station and inform him that they brought in Allison Torres’ bodyguard and they are pretty sure he killed Tyler. So, they are afraid Allison will try to kill him again. Tom says he has to go to the Fashion Week Charity Gala tonight, and he can’t skip it. Billy and Laura volunteer to go undercover at the gala and keep an eye on Tom. Later that night Tom’s “people” arrive on Laura’s doorstep to give her a complete makeover and pick out a gown for her to wear – tom doesn’t want her to embarrass him.

Laura and Billy arrive at the party and make their rounds, chit-chatting with members of the fashion industry. Laura is mortified when a woman informs her that the purse Tom gave her that she has been filling with snacks is worth $12,000. Laura sees Tom leaving the event so she and Billy follow him. Outside in front of the building Tom confesses that he feels horrible about his assistant Tyler and he can’t stop thinking about him. He feels like it is his fault that Tyler was killed. While they are talking to him someone in the crowded street opens fire and shoots Tom.

The ambulances and other police officers arrive, and Laura reveals it was just a flesh wound and Tom is going to be just fine. As they wheel him in to the ambulance his ex-girlfriend Alison sobs hysterically and climbs in with him. Laura says they can rule her out as a suspect, those are not the tears of an ex-girlfriend who just put a hit out on her boyfriend.

The next morning they have no idea who shot Tom still. Laura thinks that Tyler may have been involved with knock-off designers, they found a knock-off Tom Burke bag in Tyler’s apartment. Billy heads down to Canal Street and finds a man selling Tom Burke knock-offs, he tells them where he got them. They head to a make-shift factory and Billy realizes that the designs they are using in the sweat-shop are ones from Tyler’s apartment.

Billy leaves and gets a warrant, they have video footage of the man from the Tom Burke sweatshop running away from the gala after tom was shot the night before. Billy and Jake head back to the sweat shop where the knock-off bags were being made and it has been moved, the building is completely empty.

Laura and Billy decide to go talk to a woman named Gabriela that Laura met at the gala last night, she runs an anti-counterfeit campaign. While they are there, they notice her receiving a mysterious shipment from one of the men that were in the sweat shop making Tom Burke knock-offs. But, they have no way to prove that she is in charge of the counterfeiting without a warrant. They decide to go back to Tyler’s house and look for more evidence.

Max runs a trace on the funds going in and out of the factory that was making Tom Burke’s knock-offs, Laura and Billy are shocked when he reveals that they were transferring $250,000 to Tom Burke’s account every month.

Laura pays Tom Burke a visit at his runway show and reveals that she knows he is a “greedy bastard” and has been counterfeiting his own designs to make more money, and he killed Tyler because Tyler was furious when he stole his design and had it counterfeit. They bring him in to the police station and Tom and Gabriela both crack under pressure and confess to killing Tyler and staging Tom’s shooting.