The Mysteries of Laura LIVE Recap “The Mystery of the Art Ace”: Season 1 Episode 7 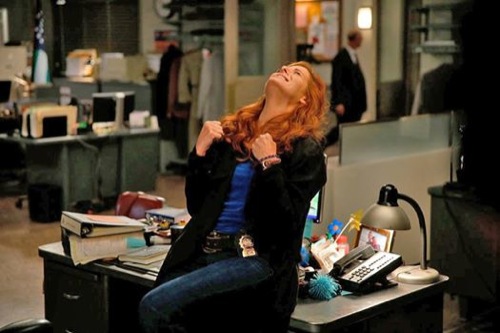 Tonight on NBC The Mysteries of Laura continues with an all new Wednesday October 29, season 1 episode 7 called, “The Mystery of the Art Ace.” On tonight’s episode a gambling ring is uncovered by the team while they investigate the murder of a gallery owner’s son in Koreatown, and Laura reunites with her estranged dad as she prepares to go undercover as a high-stakes poker player.

On the last episode, our detectives headed to NY’s Fashion Week to investigate the murder of a luxury designer’s gifted intern. Suspects range from supermodels to knock-off peddlers, taking Laura (Debra Messing) and Billy (Laz Alonso) from the runway to Canal Street and everywhere in between. Jake (Josh Lucas) reevaluates Max’s (Max Jenkins) position at the precinct. Did you watch the last episode? If you missed it, we have a full and detailed recap right here for you.

On tonight’s episode the son of a prominent art gallery owner is found dead in Koreatown. Looking for clues, Laura (Debra Messing) and the team navigate through the neighborhood’s karaoke scene where they uncover a gambling ring. To catch the killer, Laura must prepare to enter a high-stakes poker game, forcing her to reconnect with her estranged father (guest star Robert Klein).

We will be blogging The Mysteries of Laura season 1 episode 7 with all the up-to-the-minute details at 10PM EST so make sure to come back to this spot and watch the show with us. Make sure to refresh often so you get the most current info! In the meantime, sound out in the comments and let us know what you think of the series.

Tonight’s episode of The Mysteries of Laura kicks off with an old woman digging through a trash bin, she begins screaming frantically when she discovers a dead body in the dumpster.

Laura and Jake head to the crime scene in Korea Town to investigate the dead body in the dumpster, the man died from blunt force trauma to the head sometime between midnight and 4:00 AM.  They find a business card in his pocket that says David Sarkissian of Sarkissian Gallery.  Laura finds a wad of cash in his pants, at least $20,000.00 which rules out robbery.

Laura and Jake head to the Sarkissian Gallery, they meet David’s sister Angela and his father.  David’s sister burst in to tears, but his father seems unfazed and says he isn’t surprised considering the kind of life that he lived.  Angela has no idea why he had so much money on him, but she says he used to hang out at a karaoke bar in Korea Town.  Laura and Jake visit the bar to see if anyone knows David, while Jake is talking to the uncooperative owner Laura jumps up on the stage to sing an 80’s song.  Jake heads in to the back room of the bar and discovers an illegal poker game set up.  He informs the owner he needs a list of all of the players, she says she doesn’t know their names, but there is another game scheduled for tomorrow night.

Jake wants Laura to go undercover in the poker game, but she argues that she is rusty.  He says he has someone that can give her a quick refresher course, and says her to his dad’s house.  Her dad isn’t exactly pumped to see her, and after a shouting match – she storms out with out any poker advice.

Max does some digging and learns that NFL player TJ Cantrell has been frequenting the same poker games that David was playing in.  Meredith and Billy track down TJ at a strip club and bring him down to the precinct, he agrees to get Laura in to the exclusive poker game that night.

Laura has no choice but to track down her dad again and work on her poker skills.  Her dad agrees to give her a refresher on one condition – he wants to spend a day with his grandsons.  Laura caves and agrees to his terms and sits down to play poker with him.

Later that night Laura goes undercover to the to the poker game, and tells everyone her name is “Red Velvet.”  Laura’s dad, Jake, and Meredith are parked out front in a surveillance van keeping tabs on her via spy cameras.  Laura plays for a while and then flashes her badge.  The hostess of the game, a cocktail waitress named Bridget, bolted from the building and ran down the street.  Meredith chases after her and tackles her and cuffs her.

They bring Bridget in for questioning, and she insists she has no idea what happened to David Sarkissian.  Bridget says that she met him a year ago, she was using him to launder her poker money at the art gallery.  They check out Bridget’s story, and it turns out she was telling the truth and she bought hundreds of thousands worth of paintings from the Sarkissian gallery.  She says that she used to use an art dealer named Titus, but she fired him and hired David.

Max and Meredith head to an art gallery auction to track down Titus.  Titus insists that he had nothing to do with David’s death, but he did tell David’s father that he was not happy his son was stealing his business and laundering money for Bridget.  Meredith calls Jake and tells him that they have a new suspect – David’s father.

Jake and Laura head back to the Sarkissian Gallery to discuss David’s death with his father.  He insists they are running a clean operation.  Jake reveals there was framer’s glue in and around the head wound on David, David says he is calling his lawyer, and they take him down to the police station.

At the police station, David’s father confesses to killing David with a brick and says he threw it in the dumpster.  Laura and Jake aren’t buying his confession, they think he might be covering for his daughter Angela.  They head back to the gallery, and Laura distracts Angela while Jake heads upstairs to snoop around.  He finds a bowling pin with broken glass glued to it, with blood on it, stashed in a cupboard.

Despite the fact that the murder weapon was hidden in her office, Angela insists she is innocent and didn’t kill David.  While they are talking to Angela, they meet Angela’s boyfriend Will, a struggling artist.  Ironically, the art piece Will has on display is called “99 Bottles Of Beer Not On The Wall,”  and the same beer bottles on his art piece are the ones in the dumpster where David’s body was found.  Will confesses that he followed David to the poker game, and tried to get him to sell his bowling pin to Bridget so he could make some extra cash.  When David refused to launder Bridget’s money with Will’s art, he hit him over the head with the bowling pin.  Angelia is shocked that her own boyfriend killed her brother David.  After a failed hostage attempt, Jake and Laura take Will in to custody and charge him with murder.