BY CDL Staff on November 17, 2014 | Comments: one comment
Related : Recap, Television, The Newsroom 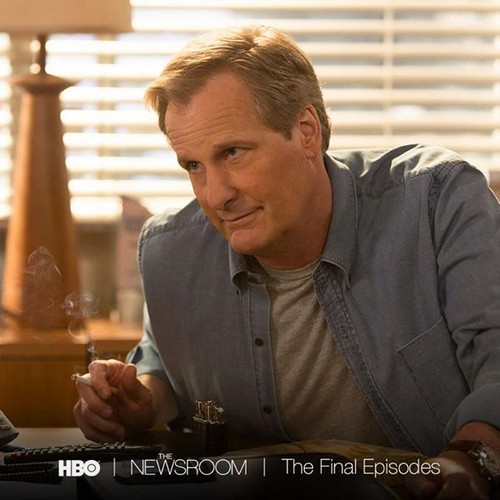 The Newsroom returns on HBO tonight with an all new Sunday November 16, season 3 episode 2 called “Run”. Tonight, Rebecca defends ACN again as another lawsuit looms; Neal [Dev Patel] could be in trouble after a dangerous leak; Charlie [Sam Waterston] and Leona confront a hostile takeover attempt by Reese’s half-siblings; Sloan worries that Don has crossed an ethical line; Hallie regrets a late-night tweet; Maggie weighs the pros and cons of eavesdropping.

On the last episode, in the wake of the Genoa debacle, Will (Jeff Daniels), Mac (Emily Mortimer) and the “News Night” team decidd to err on the side of caution in reporting a major breaking story, which could have enhanced credibility, if not ratings. Neal (Dev Patel) faced a slippery slope when he was contacted by an anonymous source in possession of stolen government documents revealing how false press stories planted in newspapers spawned fatal riots in Kundu. Sloan (Olivia Munn) looked to solve a takeover puzzle; Maggie (Alison Pill) was forced to pinch-hit for Elliot (David Harbour) in the aftermath of the Boston Marathon bombings. Did you watch the last episode? If you missed it, we have a full and detailed recap right here for you.

On tonight’s episode as per the HBO synopsis, “with Rebecca (Marcia Gay Harden) again tasked with defending ACN in a possible lawsuit, Will tries to protect Neal from the fallout over the DOD leak. Charlie (Sam Waterston) and Leona (Jane Fonda) enter the fray of a hostile-takeover gambit involving Reese’s (Chris Messina) half-siblings, Blair (Kat Dennings) and Randy Lansing (Chris Smith). Sloan fears Don (Thomas Sadoski) may be guilty of cashing in on insider information; Maggie ponders the ethics of eavesdropping; Hallie (Grace Gummer) pays a price for a late-night tweet.”

You aren’t going to want to miss any of the unfolding action tonight. We’ll be recapping the season 3 episode 2 live right here for you at 9pm. In the meantime, while you wait for the recap, check out a sneak peek of tonight’s episode below!

Reese meets with the twins, Randy and Blaire, about their plans to take over the company.

Will and Neal meet with the lawyer to talk about his recent illegal activities involving espionage. Neal reveals the details of his story, primarily how he was contacted by his source and how he was instructed to receive the material on a flashdrive. The lawyer, Rebecca, tells him that he’s committed espionage and, in his treasonous behaviors, would be sent to jail immediately. She urges him not to run the story, to cut off contact with his mysterious source, and to not do anything with the stolen documents — which he helped acquire. Neal doesn’t like this idea, as he believes the people have the right to know the truth.

Maggie is on the train when she spots a man talking on the phone. She spots the opportunity for a good story. She takes the seat next to the man and sneakily begins recording him. One of the passengers, a young man, helps her pull off the move.

Sloan and Don are at breakfast.

Hallie reveals to Jim that she did a stupid thing. She screwed up. She says that she posted a tweet from Neal’s handle. The tweet read, “Boston Marathon republicans rejoice that there’s finally a national tragedy that doesn’t involve guns.” The tweet was published for about 27 minutes before Hallie deleted it, so there’s a chance somebody picked it up, even though it was posted in the middle of the night. Hallie admits that she came in to the office to get fired.

Reese continues his meeting with the twins. Charlie is also there helping them figure stuff out. In ten days the twins turn 21 and have the ability to buy enough stock in the company to assert ownership — after which they plan on selling the company. The twins are very bitter towards Reese, and the hostile takeover seems to be more about their hatred for Reese than anything else.

Mackenzie comes back from a meeting with an FBI friend and walks in on the meeting Will and Neal are having with Rebecca. Mack says that the FBI has never charged a journalist with espionage — the worst charge that would come Neal’s way would probably be contempt. Probably only 10 days, maybe a little more, in jail. Mack says that they absolutely have to run the story. Rebecca and Will are VERY opposed to this idea; however, they’re only trying to look out for Neal.

Don, while at breakfast, asks if he and Sloan are a couple. After a few moments of awkward banter, Sloan admits that she thinks they are a couple.

Charlie receives word about Hallie’s terrible error in judgment. Charlie fires Hallie on the spot. He’s furious that they’ve managed to enrage an entire political party. Hallie understands the severity of her lapse in judgment.

On the train, Maggie has totally freaked out the EPA official she overheard talking. She admits to him that she believes she wasn’t in the right to take his candid remarks and, therefore, won’t be running the story. The official wants to trade her another story for the promise that she’ll forget about what she heard, but she tries to reassure him that she’ll let everything go. Turns out, the man sitting across from her on the train is a law professor who teaches ethics. They’re clearly flirting and having a good time on the train ride back to the city.

When Maggie gets off the train, the EPA official offers her an exclusive interview along with a preview of a report that’s on embargo until Monday. Maggie also gives her number to the law professor before she leaves.

Leona comes into the boardroom and offers the twins a higher amount than what Savannah Capital is offering them. When the twins leave, Reese reveals that they don’t have that amount of money. Leona says, Get me that money.

The FBI and their team come to search all the hard drives in the newsroom. Turns out that Neal’s source is a bit more dangerous than everyone suspected. Mack’s FBI friend, the one she talked to earlier, reveals that she didn’t know this was the particular matter she was talking about.

Will reveals that he also knows the name of the source.

Meanwhile, we see Neal making a run for it. He destroys his phone, along with a message Will had sent him. The note says, “Neal run.”