BY CDL Staff on November 23, 2014 | Comments: one comment
Related : Recap, Television, The Newsroom 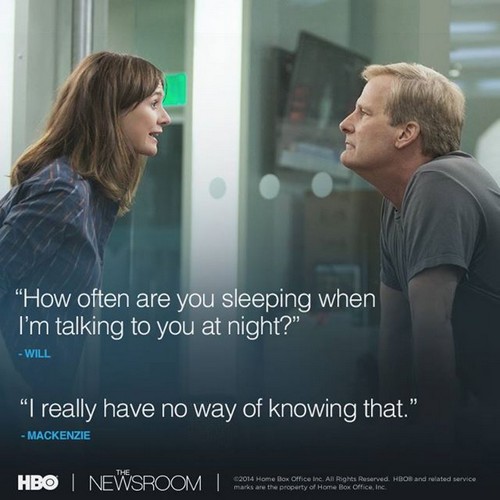 The Newsroom returns on HBO tonight with an all new Sunday November 23, season 3 episode 3 called “Main Justice,” and we have your weekly recap below for you.  On tonight episode, Will [Jeff Daniels] is in for a surprise at the White House Correspondents’ Dinner; Leona and Reese [Chris Messina] scramble to raise money to halt Blair and Randy’s takeover; Charlie shares ideas with an ACN suitor; Maggie’s scoop on the EPA gets air time on “News Night”; Sloan and Don try to keep their romance a secret from a new HR executive.

On the last episode, with Rebecca (Marcia Gay Harden) again tasked with defending ACN in a possible lawsuit, Will tried to protect Neal from the fallout over the DOD leak. Charlie (Sam Waterston) and Leona (Jane Fonda) entered the fray of a hostile-takeover gambit involving Reese’s (Chris Messina) half-siblings, Blair (Kat Dennings) and Randy Lansing (Chris Smith). Sloan feared Don (Thomas Sadoski) would be guilty of cashing in on insider information; Maggie pondered the ethics of eavesdropping; Hallie (Grace Gummer) payed a price for a late-night tweet. Did you watch the last episode? If you missed it, we have a full and detailed recap right here for you.

On tonight’s episode as per the HBO synopsis, “Leona and Reece look to raise cash in order to salvage ACN and thwart Blair and Randy. Will gets a surprise at the White House Correspondents’ Dinner, while Charlie trades visions with ACN suitor Lucas Pruit (B.J. Novak). Maggie’s EPA scoop makes it to “News Night.” Sloan and Don try to keep their relationship a secret from a new HR veep.”

You aren’t going to want to miss any of the unfolding action tonight. We’ll be recapping the season 3 episode 3 live right here for you at 9pm. In the meantime, while you wait for the recap, check out a sneak peek of tonight’s episode below!

The FBI continues to raid the studios and the team eventually decides to air the craziness. However, it’s all just a ploy — an act. Molly thinks they’re bluffing, but Mack continues on with the act, choosing to head to the production room. Everything is live and going, the FBI team sees the fake feeds going, and Molly soon tells her team to stand down.

The lawyer has negotiated a 1-week cease fire. Friday, they will all be meeting in DC to figure things out. Will assures everyone that Neal is somewhere safe — but that he doesn’t know exactly where he is.

Maggie reveals the fact that she’s in possession of an embargoed EPA report. She goes to Jim for help in making this news story more exciting for the public to watch.

Reese and Leona come to visit Charlie to talk about their money situation. Charlie says he thinks he knows what’s coming. Reese and Leona say the only way to survive this is by selling off ACN, their news network.

Next, Charlie has a meeting with the crew. Charlie tells Mack and Will that they’ll stand by this decision. The person who could potentially buy the company is a man called Pruitt. Charlie wants them all to go to the Correspondence dinner.

Jim and Hallie have a conversation about her new job, which gives reporters bonuses/incentives for high pageviews. Jim’s worried that Hallie will spill ACN secrets in an effort to increase her success at this new start-up. Before they go to bed, they talk about their disagreement, but Hallie’s clearly pissed.

Don has a meeting with the new HR head, who basically wants to put a stop to all in-office relationships, to avoid problems. Of course, this spells disaster for Sloan and Don, who are exploring this new possibility between the two. He tells the HR exec, whose name is Wyatt, that there’s nothing between the two.

Molly and Mack have a secret meeting in a sauna. Molly basically tells Mack that, if they’re able to contact Neal, that they should do so. They found some compelling evidence on his hard drive that suggests he helped aid in the document transfer. Molly says that they can tell him to come in or the FBI can kick his door down. It’s up to them. But they need to catch Neal’s source, who’s very dangerous and a wanted individual. Mack gets up to leave.

Later, Mack meets Jim and Don at the bar. She asks them if anyone has contact with Neal. Jim says yes that someone could get a message to him. Mack wants Neal to know that he needs to come in — to DC at Main Justice. There, he’ll have immunity, and she wants him to know that no journalist has ever been charged under the U.S. Espionage Act.

Maggie’s EPA story airs. Mr. Westbrook is there for an interview with Will. Mr. Westbrook basically goes on the air with a Doomsday speech. Will tries to redeem the interview, but the climatologist basically keeps going off. The production crew can’t believe what they’ve witnessed after the interview’s ended.

Charlie, Will, Mack, and Rebecca with the U.S. Attorney General for security issues. The guy wants to see the information that’s on the flash drive. The attorney asks Will to reveal the source but Will is steadfast on his refusal to do so. They leave the meeting with a seeming victory.

Everyone attends the U.S. Correspondence Dinner.

Don and Sloan are at the dinner. Wyatt, the HR exec, wants to nail them for being in a relationship. Sloan tries to hard to deny it — Wyatt leaves after stating his longterm goal: bring down the cute Don-Sloan.

Charlie runs into Pruitt at the dinner party. He comes across as a high-maintenance-prick-ish type, but Charlie must be cordial, as this man is the network’s last hope to stay afloat.

Mackenzie is sitting at a table when a lovely woman asks her something: Are you the person who decides if and when a story airs? Mack says yes. The woman eventually reveals that she’s The Source. Mack wants her to prove it, so the woman says that 38 people died in Kundu. Mack tells her to stop, that she’s heard enough, and the woman says that the network will have her cooperation for 96 hours. If she doesn’t see the story air sometime before that, then she’s releasing the knowledge herself. The Source is really ticked off that they’re working so closely with the U.S. Government on this.

Will is posing for photos with guests at the party when a young man enters and pulls a document out of his suit pocket. It’s a subpoena for him to be sworn into an investigative hearing. The U.S. Government wants the name of The Source.