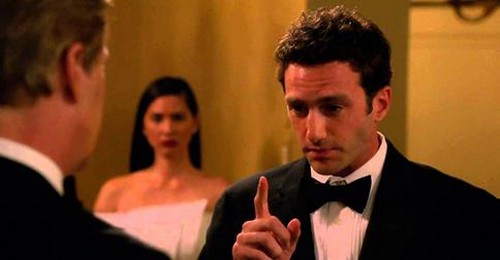 The Newsroom returns on HBO tonight with an all new Sunday November 30, season 3 episode 4 called “Contempt,” and we have your weekly recap below for you.  On tonight episode, Will [Jeff Daniels] refuses to reveal the source of stolen government documents even though he could go to jail for contempt. Meanwhile, Sloan [Olivia Munn] and Mac search for a last-minute buyer for ACN when Charlie’s had it with Lucas; and Hallie’s new job puts a strain on her relationship with Jim.

On the last episode, Leona and Reece looked to raise cash in order to salvage ACN and thwart Blair and Randy. Will got a surprise at the White House Correspondents’ Dinner, while Charlie traded visions with ACN suitor Lucas Pruit (B.J. Novak). Maggie’s EPA scoop made it to “News Night.” Sloan and Don tried to keep their relationship a secret from a new HR veep. Did you watch the last episode? If you missed it, we have a full and detailed recap right here for you.

On tonight’s episode as per the HBO synopsis, “facing a court subpoena and possible incarceration for contempt, Will stands firm in refusing to reveal the source of the stolen DOD documents. As Charlie’s disdain for Lucas grows, Sloan and Mac scramble to find a more acceptable 11th-hour buyer for ACN. Jim’s relationship with Hallie is put to the test by her new job at Carnivore, a start-up website.”

You aren’t going to want to miss any of the unfolding action tonight. We’ll be recapping the season 3 episode 4 live right here for you at 9pm. In the meantime, while you wait for the recap, check out a sneak peek of tonight’s episode below!

Everyone’s still at the Correspondence Dinner. Will and Co. look at his court order. Rebecca, their lawyer, tells everyone what this means for Will.

Everyone disperses. Will wants to get out of there, as all the major news outlets have already picked up the story of him being served by the court. Rebecca needs to talk to him, but he doesn’t want to do it here.

Meanwhile, Mac says that they need to get that story up by Wednesday, or else The Source is gonna leak it herself.

Charlie talks with Will about Pruitt — the whole reason for them being there.

Jim and Hallie have a fight about her new job. They’re at a disagreement, a crossroads. They want to head home to NYC and offer to give Maggie and her new boyfriend a ride as well.

Will, Mac, and Charlie meet with Pruitt, who thinks that he can change the network into something that it has never been before. Charlie unleashes on him, as he doesn’t like his vision for ACN.

On Monday, Will shows up for his hearing, where he, once again, refuses to reveal the identity of The Source.

At the office, Wyatt asks Don why he hasn’t accepted his friend request on Instagram. Don, trying to play it cool, accepts the request — but he has a runner take a note to Sloan. Understanding Don’s cryptic message, she gets onto Don’s Insta account to delete all the photos of them that reveal they’re actually a couple.

Charlie meets with Sloan about what to do about the network’s future. Sloan has some information that might help everyone: Someone named Toni Dot is looking to buy a media group. She came across the info a few weeks ago but didn’t know what to do with it, as it didn’t apply to anyone’s circumstances then; however, now it does, and she says that she can get in contact with her. Charlie wants her to set up a meeting with her and Leona, but Sloan says Leona can’t meet with a new buyer while she’s meeting with Pruitt.

Sloan and Charlie agree to have a secrete meeting with Toni — on the downlow.

Jim comes home and sees Hallie working on a piece. Hallie says that she’s working on a personal piece about her experience with the Plan B pill. They seem to be cool, but as soon as Jim sits down, he says something. Hallie loses it, unplugs her computer, retreats to her bedroom, and slams the door.

It’s Tuesday. Will and Co. meet with the judge. Mr. Lasenthal pleads for the judge to make Will reveal the source. The judge is very level-headed and doesn’t really side with anyone but the law. He admits he doesn’t want this becoming a big deal, and he then orders Will to appear before a grand jury.

Don wonders why Mac is pushing to air this story. He pulls her aside and asks her why they have to air it tomorrow night and not a week from tomorrow night. She doesn’t say anything; instead, she says she’s going to be gone for about four hours. She tells him not to ask her where she went when she returns.

Sloan and Charlie meet with Toni about a potential buy. Toni seems very interested and says she’s set a meeting with her board to discuss things further. When Sloan and Charlie are leaving, Charlie asks if Sloan if Toni might be eccentric — because she set a lunch date at a sushi restaurant, but she clearly didn’t eat anything.

Mac has a quick meeting with The Source. Mac begs her to lift the deadline. The Source says she can’t promise anything, can’t promise that she won’t dump the documents. Mac says they need more time — because the original writer of the story about to be leaked has a family on the ground and his family might not be safe unless everyone leaves the country before ACN reports it. The Source doesn’t trust anyone, really, except for Neal. Mac’s insistent on pushing up the deadline. She doesn’t trust The Source at all. She threatens her before she leaves: “Dump the documents and I’ll quite my job, go straight to the FBI, and reveal your name.”

It’s Wednesday. Will has his next hearing. Once again, even with a court order willing him to do so, he doesn’t reveal the name of The Source.

Hallie has written a very personal story critiquing her relationship with Jim; though she doesn’t use his real name, she’s clearly commenting on their life together.

Hallie shows up at ACN. Her security key still works. She meets with Jim. They go up onto the roof and have another fight. They continue to be at odds with their philosophies and perspectives regarding news and the way media is consumed. When Hallie leaves, it sorta seems like she’s broken up.

Someone calls Will in the middle of the night. His hearing has been pushed, and he probably won’t be going to jail.

On Thursday, the news team has safely gotten the Barto family out of the country. Now, they can air the story.

Reese wants to see Mac in his office immediately. Reese says that Pruitt, who’s set to sign the deal later tonight, won’t allow the story to be aired.

Mac tells the staff. She returns to her office. She’s distraught. Don comes to visit her. Mac says they need to box up the document and asks him who’s the most “responsible” reporter he knows. He writes a name down on a piece of paper.

Meanwhile, Wyatt finally outs Sloan and Don as a couple. Turns out, Sloan wrote a letter declaring her “couple-dom” and sent it to HR a few weeks ago after Don managed to buy some stock with Sloan’s info. Wyatt eventually says that he was just messing with them all along.

Pruitt has entered the building an hour early. Charlie and Sloan think that they can save the day after locking Toni Dot as a new buyer, but turns out that Toni was just using meeting with ACN as leverage. Instead, she acquired another media company: Halifax.

Sloan and Don rush into the boardroom to tell Charlie the news. Sloan gets there a few seconds too late, after Charlie has revealed that he has a new buyer. Pruitt knew Toni’s plan all along. Pruitt says that he and Charlie are going to be great friends :)

At night, Mac reveals to Will that she knows who the source is. “Oh, God,” says Will, “you can’t ever repeat what you just said.”

Next day at court, the Judge says that Will will be held in contempt unless the witness can prove he has Just Cause. Rebecca stands up and says that Will does have the right to remain silent because he’s protected by a journalist’s privilege to stay silent that has been recognized by a wide range of courts. The gang’s all awaiting the judge’s decision.

Eventually, the judge finds Will in contempt.

The boxes of classified documents arrive in the cubicle of an older woman at the Associated Press.

All the ACN reporters are bustling around the city looking for wedding items: dresses, flowers, cakes, etc. Will asks his reverend for a favor — to marry them this afternoon.

Everyone’s in the City Hall chapel for the ceremony.

When they’re done getting married, Will and Mac walk out of the chapel. The U.S. Marshals come for Will.