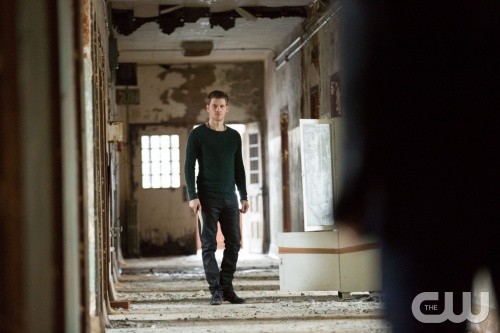 Tonight on the CW their new fantasy drama, THE ORIGINALS continues with a new episode called “Long Way Back from Hell.”  On tonight’s episode Rebekah’s past catches up with her.  Did you watch the last episodes?  We did and we recapped it right here for you.

On tonight’s episode at the re-opening of St. Anne’s Church, Father Kieran found himself in a great deal of trouble after a run-in with a witch from his past. Marcel and Rebekah grew concerned when the reemergence of someone they once knew threatened to expose secrets they’ve kept buried for nearly a century. Elsewhere, Sophie was shocked when a discovery was made at the cemetery, but she soon realized things may not be as they seem. With the full moon looming, Hayley let Rebekah in on her plan to throw a party for her werewolf clan, but things took a dangerous turn when uninvited guests arrived. Meanwhile, Cami was conflicted when she made a difficult decision involving the safety of Father Kieran, and Elijah found himself facing his own dilemma when he had to choose between Hayley and his siblings. Finally, when one of his plans failed, Klaus took drastic measures in the Cauldron, resulting in dangerous repercussions that affected everyone involved.

On tonight’s episode When Rebekah finds herself locked up in the sanatorium where she worked in 1919, she realizes a witch named Genevieve (guest star Elyse Levesque) is back to seek revenge and to reveal dark secrets that would destroy Rebekah if exposed. A distraught Elijah turns to Marcel and Hayley for help when one of his decisions puts Klaus and Rebekah’s lives in danger. With time working against them, Marcel realizes he may hold valuable information that could lead them to Rebekah and Klaus, but revealing it will almost certainly result in deadly consequences. Matt Hastings directed the episode written by Ashley Lyle and Bart Nickerson.

We hope you stop by for this epic show! Klaus, Rebekah, and Elijah have been some of our most favorite villains on TV, and we’re excited to see how this season further explores their complexities and character quirks.  Make sure to come back here later tonight at 8 PM EST for your LIVE recap.

Rebekah lays pale and still. She has been drugged. She’s in an abandoned hospital and is hallucinating horrible sights. She calls out and tries to run away. She runs to the doors and out into the yard of the sanitarium. She is stabbed thru the chest by Genevive. Rebekah collapses. Celeste has Klaus and he’s been all sliced up.

At Lafayette Cemetery Elijah attacks people at Sophie’s consecration. Monique tells him she has a message from Celeste. To find what you’re looking for follow the path she left behind. There are burning tattoos on his chest and Rm with names on them.

Rebekah wakes with stake still in her and they tell her she’s been poisoned with werewolf venom. Genevive is there and reminds her they were friends once. Flashback to 1890s New Orleans. Rebekah and Genevive volunteer at a hospital and Rebekah calls her out as a witch.  Genevive knows she’s a vampire and asks why she’s there. Rebekah says if all the people die of influenza she won’t have anyone to eat. She invites G and another nurse to meet her at a jazz club.

Rebekah writhes in pain. Marcel and Elijah have a manhunt on to find Klaus and Rebekah. Elijah calls for Hayley and takes off his shirt. He tells her to make a list of the names on his body. There are many. He thinks they are names of the bodies Celeste has inhabited over the years. He says when he solves the riddle they’ll find his siblings.

Genevive checks on Klaus. She slices him up the middle and shoves her hand inside him to retrieve the bone dagger. He howls in pain!!

Elijah and Marcel go to see the father of a witch who was shunned and then killed herself. Celeste took her body when she jumped from the bridge where she had her first kiss with Elijah. Hayley calls and asks him to find out about Brynn Devereaux. The witch who put the spell on the wolves.

Klaus is awake and Genevive is nursing him. She tells him she pitied him and he offers her an alliance. But she wants to talk about Rebekah. She tells him R has wronged them both and gives him some blood to snack on. He drinks then starts to choke. She fed him Rebekahs blood so she can show him his sisters betrayal.

Rebekah sees bloody victims everywhere. The. A flashback to the past with R kissing Marcel in the hospital morgue. They discuss a spell they want Genevive to do for them so they can be together. R says she doesn’t like using her. She says she wants to be with him and doesn’t want to be afraid of Klaus anymore. They get busy. G walks in on them and runs back out.

Klaus tells G he knows Rebekah and Marcel were sneaking around. She says that’s not the secret. She asks if he’s read the Old Testament. She says God was right because he was powerful. She shows him more.

Marcel and Elijah are roughing up a guy at the pit. The guy works at city hall and they demand the records of all supernatural deaths. He tells him the records are at St Anne’s.

Rebekah sees twin boys that run at her. She screams. Genevive is there and says her wolf bites are looking bad. She tells her she linked Klaus’ mind to hers and Rebekah begs her to stop.

At the church Elijah and Marcel comb the records. Elijah Asks him about Brynn and Marcel says she cursed the wolves for him. He asks why Hayley has been with the cursed wolves and Elijah threatens him. All the names but one were witch suicides except one who died of influenza back in the day.

Elijah says this is the answer but he doesn’t know what it means. G turns on some old flapper music to trigger a flashback and R begs her to stop.

G tells Klaus that Rebekah and Klaus plotted to get rid of him for good. R sees visions from the past and can’t stop them. G tells Rebekah she’s much nicer than she expected and she likes her brothers but prefers Klaus.

A man spills a drink and Elijah cleans off the victim. He gives her his handkerchief. R tells G she would like her brother Cole too. She asks G to help her find someone. Her father Michael. Klaus sees this all and tells G she’s lying but she reminds him this was she their Dad showed up. Klaus says his sister would never do that. G tells him he’s sadly mistaken.

Elijah whispers to Hayley that she was right about the witch before Marcel comes in. She found the witch from the 1900s they were looking for. She worked at the Sanitarium and Marcel says that’s where they are. He tells Elijah he needs to explain something before they go.

G shows Klaus more of Rebekah’s recollections. He sees G doing the spell for her. Rebekah screams and begs her to stop. Klaus is in tears and screams her name. Elijah says now he understands how Michael found them. He chokes Marcel in rage. Marcel says he loved Rebekah and that’s why he did it. Elijah says Klaus will be in a rage and he has to protect Rebekah. Marcel says they need to get there before Klaus discovers the truth.

Rebekah runs thru the hospital but the doors are locked. Celeste is there and tells her to give it up. She tells her all the Originals are liars but Rebekah insists Elijah is good. She says Klaus will kill Marcel  and then do something to her and Elijah wi never forgive her.  Celeste tells her she killed her and shows her that she was Clara, Genevive’s friend back in the day.

Flashback to Rebekah begging her to undo the spell that summoned Michael. G begs her to just tell Klaus the truth. She says she won’t let Klaus punish her family. Rebekah infects both G and her friend Clara with influenza killing the two witches to keep her secret.

Celeste tells Klaus she just took another body but G had to stay dead for a while. G tells Klaus she knows it hurts for him to see the truth but now he can take revenge for both of them. She offers him her wrist to feed and regain his strength and he drinks. She brings out the knife and then releases his bonds.

He grabs the knife and puts it to her neck then lowers it and walks away screaming for his sister while Genevive smiles wickedly.

Elijah and marcel get to the hospital and split up to search. Klaus finds Rebekah and she runs from him terrified. He tells her it has to end now. Celeste leaves but Hayley knocks her out so she can force her to chat. Rebekah runs. Klaus pursues. He corners her. He tells her there’s no more dagger in the box for her and holds out the bone knife. He tells her it will keep her in anguish. She tells him to just do it and he asks why she’s not begging for mercy. She says she knows it won’t do her any good. He asks what Michael would think. He throws her through a wall and she grabs a pipe and comes at him. He knocks her down but then Marcel is there. He says she can watch her beloved die and she begs for Marcel’s life. He goes to stab her but then Elijah is there and grabs the knife me plunges it I to Klaus. He tells Rebekah and Marcel to run far away and then sits down holding Klaus on his lap.