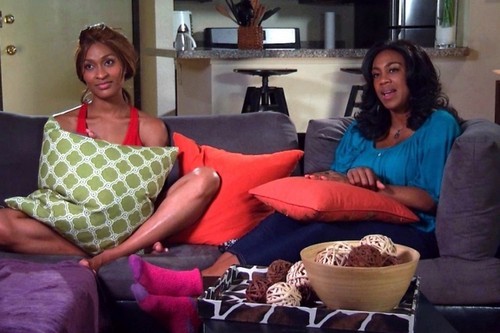 The Peoples Couch airs tonight’s with a new episode and Bravo has decided to expand the show into a one hour episode.  With too much television to cram into thirty minutes, viewers will now have a little more leg room as they kick back, relax and share watching everyday people comment on television’s most buzz and cringe worthy moments.

If you’re new to the show The People’s Couch enters the living rooms of households and films real people including some Bravolebrities watching and commenting on popular shows and news from the past week. The half-hour, unscripted series delivers the buzziest watercooler moments of the television season by showcasing avid TV watchers in their homes, as they laugh, cry, talk, gasp, and scream at their TVs.

On tonight’s episode, they will feature clip’s from “Modern Family,” “I Wanna Marry Harry,” “LA Hair” and “So You Think You Can Dance.” “The People’s Couch,” turns the cameras around on everyday people as they laugh, cry and gasp at primetimes most talked about shows from the past week in this hour long comedic documentary series .

Tonight’s new episode of The People’s Couch is going to be hilarious and you won’t want to miss a minute. We’ll be live blogging it right here for you and in the meantime, hit up the comments and tell us your thoughts are on the show!

On tonight’s episode of the “People’s Couch”, we get to see how everyday people react to their favorite shows from the comfortable setting of their own homes. And even if their words aren’t enough to crack up the families watching this program then their facial reactions alone could easily have done the trick.

Bravo chose a wide selection of different ages, races, and sexual orientation to be their viewership and it’s amazing to see how many pre-conceive notions are disproved. Like during their first show when they had to watch the pre-view for the upcoming season of “The Real Housewives of New Jersey”, many loved the idea of a court trial and although the primarily thought Teresa Guidice and her husband were going to go to jail – they didn’t want her to leave their favorite program. And for less selfish reason – they didn’t want her to leave her kids. The kids appeared to have gotten out of hand and several mothers showed their disgust to this.

Frankly, their only consolation was the promise of fresh drama between Amber and everyone else. Though it should be pointed out that many voiced some concern over the Twins joining the show. Looking at them with of their husbands was a tad disturbing. More than one person sitting at home wondered if the husband was perhaps sleeping with both sisters.

Then there was the time they had to watch “I Wanna Marry Harry”, had because without this cast there probably wouldn’t even be a viewership for the show. And it’s easy to see why the ratings had been abysmal. No one believes that this young man could be Harry and they think it’s laughable that these girls auditioning to marry him could for one second mistake him with the real life prince. Much less think he’s straight. The crew of gay guys suspected the actor the producers hired was actually playing for their own team!

“So You Think You Can Dance” turned out to be much more enjoyable. Everyone fell in love with the dancing and most of the guys were amazed every time they saw a male dancer do a split. They winced but they were amazed. Though the audience also agreed more than merely liking the show. They kind of all shared the viewpoint on one of the judges.

They don’t like Nigel and they feel like he isn’t being fair to the dancers. He’s sent home some great dancers home because they didn’t fit his particular mold. For instance there was a young black and obviously gay man who Nigel turned down – so everyone watching pretty much started hating right after that. And you can’t say it was a race or sexuality issue either. That young man was talented and more than one family thought so.

Amidst they’re joking around and their love to hate moments- there have been a few shows that have moved this tough bunch to tears. The wedding scene in “Modern Family” was especially touching. Not only were some of them surprised to see Ed O’Neill back on TV (yeah, they’re that out of date), but they loved the part his character played in Mitchell’s wedding. It was touching to watch a proud father walk his gay son down the aisle.

One group was of elderly women and yet they loved watching the “The Normal Heart” more than anyone else. Prior to even watching the show – most of the audience knew it was going to be a tearjerker. And they weren’t let down in that regard. Julia Roberts was the only high point to this otherwise moving and unfortunate tale.

The grandmothers started to watch the movie because they were interested in the hot young man and they stay tuned in to see the rest of Mark Ruffalo’s compelling performance. The ending sent everyone into tears. It made no difference what their age or sexual preferences were – they all cried watching the re-telling of the Aids epidemic.

Soon after watching the film though things were moved back to light-hearted entertainment. They got to watch some shade be thrown on “LA Hair” and they also got to hear about both sexual mishaps that landed people in the OR and have their very first experience of watching a Little Person grind up on table.

There was a various range of attitudes towards their shows and yet can anyone sitting at home now say they watch their favorite shows in total silence?