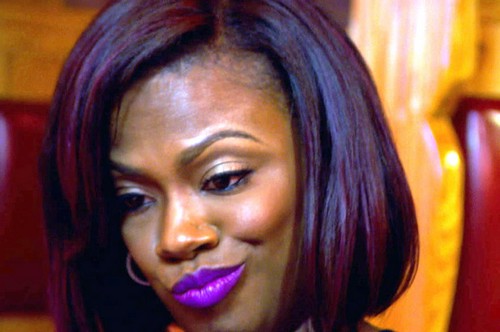 Tonight on Bravo, The Real Housewives of Atlanta Season 7 continues with an all new December 14, season 7 episode 6 called “Make-Ups and Breakdowns,” and we have your weekly recap below. On tonight’s episode, Cynthia Bailey and NeNe Leakes continue to hash out their issues and struggle to make amends. Phaedra Parks keeps her mind off of Apollo’s drama by delving into work, including a new case involving Derek J. Meanwhile, it’s New York Fashion Week and Cynthia makes her comeback on the runway.

On the last episode, Claudia got settled into her new life in Atlanta with Kenya’s help and also began to open up about her troubled family history. Meanwhile, Kandi made plans to put her old house on the market but was shocked once she and Todd uncover its alarming condition. Cynthia’s frustration concerning her defunct friendship with NeNe hit a peak, causing her to vent to her mom and sister. Hoping to get all the women to move past their issues, Kandi organized a dinner so they can all hash out their differences, but Phaedra and Kenya got into it yet again when it came to Apollo’s infamous lies. Plus, NeNe and Cynthia came face to face for the first time in months, which lead to a rollercoaster of emotions. Did you watch the last episode? If you missed it we have a full and detailed recap, right here for you.

On tonight’s episode as per the Bravo synopsis, “Cynthia and NeNe continue to hash out their issues and struggle to make amends. Phaedra keeps her mind off of Apollo’s drama by delving into work, including a new case involving Derek J. Meanwhile, it’s New York Fashion Week and Cynthia makes her comeback on the runway. Kandi also journeys to the Big Apple to visit Todd’s mother, Sharon, and is forced to defend herself and her mother once confronted by Sharon’s allegations about Mama Joyce.”

NeNe tells Cynthia she knows what kind of friend she was, and she can’t believe she would do that. She says she always had her back, and she loved her like a sister. Cynthia says “I loved you too,” and NeNe stormed off.

NeNe says she is “shocked and appalled” and Cynthia trying to blindside her in front of a bunch of people who didn’t care if they had a friendship or not. “I’ll never respect her for that,” she says.

Cynthia tells NeNe that the friendship really fell apart with the  Peter “bitch” comment. NeNe says if she were a real friend, she would have called her up about the issue, but instead Cynthis decided to do it in front of everyone else.

Cynthia says that somewhere down the line there was a respect level that just wasn’t there. NeNe says she should have talked about what it was and NeNe would have taken care of it so they could continue their friendship.

Cynthia says she wants them to continue to be friends and support each other like they used to, and NeNe agrees. The two friends hug.

Todd is in New York rehearsing for his show, leaving Kandi alone at home. They video chat and he says his mom is still pissed about what was said about her. She laughs. Todd invites her to come to New York and she seems less than enthused, but agrees to go.

Derek visits Phaedra in her office and tells her he is being sued for allegedly having his staff take her weave and replace it with cheap weave. Phaedra thinks the case is definitely one of someone trying to gain something off of his status. He tells her the woman has been posting about him online and damaging his brand. Phaedra says she definitely wants to support him and this may have to go to court.

NeNe tells her father about her conversation with Cynthia the night before. She tells him she wanted to get across to Cynthia that she was blindsided by her violation of her trust. Her father says it’s obvious they both miss each other, and NeNe says she doesn’t know if they’ll be able to be best buds ever again. He says he needs to find out why everything happened in order to move on, but NeNe says she isn’t ready. NeNe says she hopes she may need a therapist to make sure she doesn’t want to break down and never want a friendship again.

NeNe talks about the tweets Peter has been posting about her, saying that she doesn’t  understand why Cynthia won’t tell him not to. NeNe says Peter is acting like the name he was called.

Cynthia tells Peter that she thinks she and NeNe have made up, and she wasn’t expecting NeNe to show so much emotion and cry. She says she knows everything NeNe does is just out of hurt and anger.  He tells her  that NeNe did a bunch of foul things to her and she doesn’t want to hold her accountable. He says the last six months without NeNe have been “paradise.”  “I don’t want to compete with that again,” he says. “I really don’t.”

Peter tells her that NeNe would really have to sit down and commit to the friendship or else he doesn’t want to hear her name in his house.  “If you don’t address this right, you’re going to look like a punk,” he says.

Kandi goes to visit Todd in New York.  Todd says he’s going to take her to the Bronx so she can learn a little bit about him. “It smells like pee and booty, but I’m trying to stay positive because I know if I see Sharon tomorrow, things may get real,” she says.

Cynthia goes to meet her designer friend so she can  walk his show for fashion week. “New York Fashion Week is, for me, like a part of my life,”  Cynthia says.  Her friend asks her to close his show.

When they go to do a fitting, he jokes about her ass getting big, then when she walks, she is criticized for walking too slowly and a younger model is asked to show her how to walk. Her friend says he doesn’t want it to look like he chose her to close his show because she is his friend, but rather because there was no other choice.

Phaedra comes by Derek’s work to look at the salon to get evidence for the case.  He gives her a breakdown of the events that occurred.  He tells her the woman is very eccentric.

Cynthia is insecure and worried about the upcoming fashion show. “I need to set it off on the runway,” she says. “Either set it off or go home.”

Peter is still hung up on the drama between their mothers, but Kandi just wants to let it go already.

Kenya comes to Cynthia’s fashion show, thinking she will be surprised to see her there. Kandi and Peter go despite their issues because ultimately it is between their mothers and not them and they need to support Cynthia. Cynthia does a good job at the show despite being nervous.

Kandi and Peter meet with Sharon and they ask if she would ever consider moving back, and she says no because of her mother.
She says her mother has things to say about everyone and she isn’t about to keep track of everything she says.

Sharon says her mother may get clocked in the face next time she sees her. She says if she sees her she is going to confront her, no doubt about it.
“I’m not scared,” she says. “The problem is, my mother ain’t either,” Kandi responds. Sharon then threatens to sue Kandi’s mother.

The guests are Porsha Williams and Laverne Cox.

The poll of the day is: Should Peter be more supportive of Cynthia and NeNe’s friendship?

Porsha says she thought it was weird how quiet Cynthia was with NeNe. Laverne Cox comments on the influence Peter has over Cynthia, saying she changes her mind based on what he thinks of the situation.

Porsha talks about seeing Kenya for the first time since the reunion, saying it just took time for their friends to come in, and NeNe comes in and helps a bit.  She says she is past the whole situation, and it was a breakthrough for her that made her a better person. She says she is busy with her businesses, which is keeping her in “unbothered territory.”

A caller asks why she didn’t apologize to Cynthia for being late for the lunch meeting. Porsha says she apologized, but she thinks she was just so ready to pounce on her no matter what.

Another caller asks when the last time she spoke to Kordell is. She says she hasn’t spoken to him at all.

A third asks if she feels bad how she treated Kenya considering Apollo lied to Kenya. She says she feels like she never attacks until attacked, and she regrets the incident at the reunion.

Poll results: Should Peter be more supportive of Cynthia and NeNe’s friendship?
Yes: 74%
No: 26