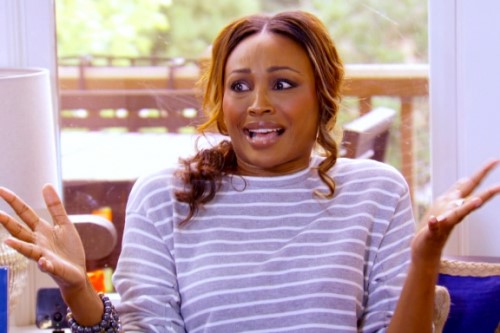 Tonight on Bravo, The Real Housewives of Atlanta Season 7 continues with an all new December 7, season 7 episode 5 called “Friend or Faux,” and we have your weekly recap below.  On tonight’s episode, Claudia gets settled into her new life in Atlanta with Kenya’s help and also begins to open up about her troubled family history. Meanwhile, Kandi makes plans to put her old house on the market but is shocked once she and Todd uncover its alarming condition. Cynthia’s frustration concerning her defunct friendship with NeNe hits a peak, causing her to vent to her mom and sister.

On the last episode, Todd made himself a little too comfortable at the Kandi Factory when he started reprimanding the staff — forcing Kandi to choose sides between her husband and her team. Phaedra continued to deal with the aftermath of Apollo’s fateful decisions, while he downloaded to Peter intimate relationship details from their past. Just as Claudia was starting to adjust to life in Atlanta, she found herself catching some unwarranted shade from a familiar coworker. Now that Apollo had come clean, Kenya was optimistic about mending her relationships with the other women until NeNe breezed into town and suggested there may be a shocking twist to the Kenya/Apollo saga. Did you watch the last episode? If you missed it we have a full and detailed recap, right here for you.

On tonight’s episode as per the Bravo synopsis, “Claudia gets settled into her new life in Atlanta with Kenya’s help and also begins to open up about her troubled family history. Meanwhile, Kandi makes plans to put her old house on the market but is shocked once she and Todd uncover its alarming condition. Cynthia’s frustration concerning her defunct friendship with NeNe hits a peak, causing her to vent to her mom and sister. Hoping to get all the women to move past their issues, Kandi organizes a dinner so they can all hash out their differences, but Phaedra and Kenya get into it yet again when it comes to Apollo’s infamous lies. Plus, NeNe and Cynthia come face to face for the first time in months, which leads to a rollercoaster of emotions.”

Tonight’s episode of Real Housewives of Atlanta kicks off with Kenya visiting Claudia at her new house and trying to help her put together her new furniture.  After pounding some drinks and gossiping they decide to go find a single man in her building to put the furniture together for them.

Kandi and Todd go to their old house, and are shocked when they walk in and see that it is half-renovated and is missing walls and a bath-tub.  Kandi’s mom was moving in to the house and had her boyfriend doing renovations – but then she decided she wanted a new house that was in her name and left Kandi’s house totally destroyed.  Todd tells Kandi that enough is enough – and how much crap are they going to take from her mother.

Cynthia’s mom and sister come over, and she fills them in on her feud with Nene Leakes.  She is tired of Nene tweeting things about her and talking crap about her in interviews, and to top it off she called Cynthia’s husband Peter a “damn bitch.”  Cynthia rants that she doesn’t want to even try to make amends with Nene and she is done with her.

Kandi pays Phaedra a visit and they catch up, Kandi explains that there is a lot of tension in their house between her teen daughter and Todd’s.  Phaedra rants about Apollo and how he is living in denial and partying like he isn’t about to go to prison for 8 years.  Kandi fills Phaedra in on her chat with Kenya about Apollo lying about her – and explains that she got emotional and started crying.  Phaedra doesn’t want to hear it though, she says that if Kenya hadn’t acted so trashy then everyone wouldn’t have believed Apollo’s lies.  Kandi wants all the girls to mend fences and thinks that they should have a dinner with all of the girls.

Nene and Gregg take 15 year old Brentt on a driving lesson in a parking lot, and they set up orange cones.  Gregg gets decked out in a helmet and chest protector before he gets in the car with Brentt.  Nene watches from across the parking lot and yells as he runs over half of the orange cones that they set up.  After the driving class Nene reveals to Gregg that Kandi wants her to go to dinner with the girls and apologize to Kenya.

Claudia and Kenya head to the gym together because Claudia wants a big booty like Kenya’s.  She explains that because she is bi-racial and half Italian, she feels like black girls are always judging her because she has a white girl butt.  Claudia fills Kenya in on the struggle of growing up bi-racial, and all of the light-skinned vs. dark-skinned drama she went through in school.

Kandi heads to lunch with her aunts, they demand to know when she and Todd are going to have a baby.  They gush about how beautiful Mama Joyce’s new house is that Kandi bought her, and Kandi fills them in on her mom’s boyfriend tearing up their old house.  The talk turns to Todd’s mom Sharon and her feud with Joyce, Kandi’s Aunts just want them all to “forgive and forget.”

It’s time for the girl’s big dinner, Kandi and Pheadra arrive first – and Phaedra decides to say a prayer that the devil doesn’t wind up taking over their dinner.  Cynthia arrives next and greets them before she takes a seat.  Kenya is the next to arrive, she hugs and kisses Cynthia and barely says “hi” to Phaedra.  The dinner gets even more awkward as Nene and Porscha arrive.

After everyone is seated, Kandi explains to them all that she wants all the girls to smooth things over so that they can move forward without anyone being uncomfortable.  Kenya can’t wait to announce that Apollo came clean and told everyone that he lied about her coming on to him and she wants everyone to have the benefit of the doubt when it comes to stories about her.  Nene interrupts and says that she never called Kenya a “whore” because she doesn’t care about what she is.  Phaedra speaks up and says that she did call Kenya a “whore” and she’s not taking it back.  But, she agrees to give her a “clean slate” – but Phaedra still won’t apologize.

Once the Phaedra and Kenya beef is squashed, Kandi turns her attention to Nene and Cynthia.  Nene explains that she “doesn’t know where their friendship went wrong” and she never knew they had a falling out.  Cynthia explains that their issue has absolutely nothing to do with all of the other girls at the table – and Nene demands to know why they are discussing it in front of all of the other girls.  Nene snaps that she always had Cynthia’s back and she “loved her like a fu—ing sister” and tells her to “stop acting like an innocent ass sister.”  The RHOA women watch Nene and Cynthia hurl insults at each other in shock.