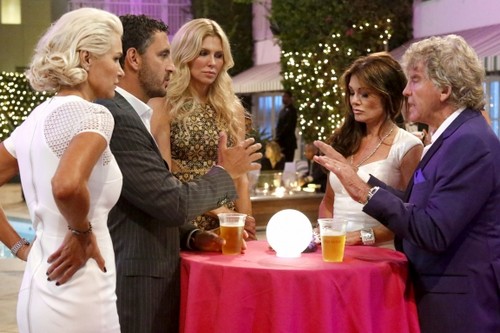 THE REAL HOUSEWIVES OF BEVERLY HILLS returns to Bravo tonight for a whole new episode called, “The Kids Are Alright.”  On tonight’s show the ladies meet for the first time since Puerto Rico, and try to decide who is friend and who is foe in the trip’s wake.  Did you watch last week’s episode?  We did and we recapped it right here for you.

On last week’s episode the trip to Puerto Rico finished with a day of golf, shopping, and the threat of arrest, all happening after the ladies learned about the shocking and mysterious departure of Lisa and Ken in the middle of the night. Back in Beverly Hills, Brandi surprised her parents with the help of Yolanda. Then, Kim and Yolanda have tearful goodbyes when their daughters Kimberly and Gigi departed for college. Meanwhile, Lisa poured her heart out to Carlton about why she left Puerto Rico in the middle of the night.

On tonight’s episode the ladies have not seen each other since the dramatic fireworks in Puerto Rico, but are drawn together by a glamorous party for the Beverly Hills 100th anniversary at the world famous Beverly Hilton hotel.

The ladies are all meeting up for the Commerce event. That means Lisa and her new best friend Carlton is going to be face to face with Kyle. A woman the both of them have run into recent trouble with. However everyone wants to be on their best behavior at the party. Some like Yolanda and Brandi are also hoping that they’ll finally get a moment alone with Lisa in order to finish their talk without any of the hysterics.

By hysterics they mean Lisa and Ken snapping at all the girls back in Puerto Rico. No one liked how Lisa and Ken ran away in the middle of the night. So when Yolanda spotted Lisa at the party she calmly asked her about it. Lisa replied that she couldn’t take the stress of what was going on. She said that why she had to leave but she didn’t really leave. Yolanda saw a picture Lisa had tweeted of her and her husband in Puerto Rico. It appears the couple never left the island but simply chose to change resorts.

That’s why Yolanda is mad. She thought she had the type of friendship with Lisa that she could say she wasn’t happy with something and Lisa would understand. But Instead Lisa left and now she’s giving Beyoncé shade to Yolanda.

And Brandi wanted to make peace with Lisa but she saw that her friend was still up to her old manipulative tricks. Carlton was semi-defending Lisa and she wasn’t even in Puerto Rico. So Brandi knew instantly that Lisa reached out to Carlton the moment she landed back in California. Brandi recognized the strategy. Lisa is getting as much people as she can on her side while everyone else she knows is angry at her.

Or better yet when she’s angry at them. Lisa and Ken are still pretty upset about what happened on their island vacation. Kim had felt bad about snapping at Ken and chose to apologize but she felt her apology was dismissed as unimportant. Unbeknownst to her, Ken and Lisa were talking to Joyce when she brought up how sorry Kim was feeling. Ken’s response was that Kim is from a different planet and she never makes sense. Was some of that is what Kim was picking up on?

Even when Kyle tries to talk to Lisa after she was the one that got pulled away for a private talk, she was feeling dismissed. Lisa pulled her away to discuss what happened on the island but when Kyle refused to believe her version of events then suddenly Lisa was tired of it all. She said she didn’t want to have to keep doing this so either Kyle trusts her or she doesn’t.  When the sad part is that Kyle is willing to forgive Lisa as long as she admits to what she did with the tabloids.

Later on Brandi takes Lisa aside. She wanted to discuss what’s been bothering her and she made it clear that she wanted to say what she needs to. Brandi was hurt that every time Lisa threw a function or had her staff do a party; there was Scheana.  The first time she could write it off but to have Lisa keep throwing her ex-husband’s former mistress in her face was too much.

Lisa explains that she’s friends with Scheana and that she believes the other woman is a good person. Yet that’s not what Brandi wanted to hear. She didn’t want to come to understand how hard Scheana’s life was because she refuses to concern herself about a whore.  If Lisa can’t accept that then their friendship at an end. Brandi was able to move pass being used as Lisa puppet but she won’t accept Lisa lying to her. The other woman needs to come clean about Scheana and the tabloids. Then they can try to go back to being friends.

The only person who managed to fix their relationship was Ken and Mauricio. The guys talked it out and realized the drama is best left to their wives. Not that Ken believes Lisa pulled that stunt with the tabloids. He’s still pretty adamant that she would never do something like that.

Which is why when he spotted Yolanda speaking to his wife he intervened. He came ready to defend Lisa and Yolanda tried to say this was women’s business.  He wasn’t wanted or needed but Ken lost his temper with her again. Before he just called her stupid but at the party he kept up with the name calling and had actually grabbed her arm.

Yolanda pulled away and was going how dare you when Lisa took her husband and left. She felt Yolanda was fishing for a fight or so she claimed and Ken had all he could take for one evening. This was how the season ended. With all the women hurt the reunion is shaping out to be nothing but trouble.

Yolanda, Brandi, Kyle, Kim, Lisa, Carlton, and Joyce all have an axe to grind and nothing was resolved during filming!