The Real Housewives Of Beverly Hills RECAP 3/3/14: Season 4 Episode 18 “The Kids Are Alright” 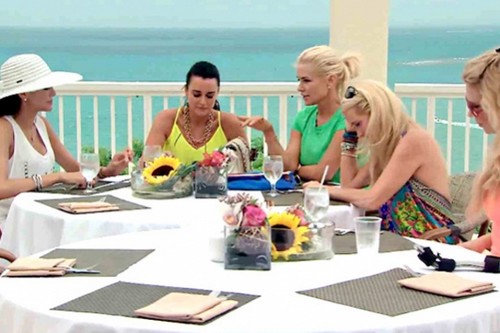 THE REAL HOUSEWIVES OF BEVERLY HILLS returns to Bravo tonight for a whole new episode called, “The Kids Are Alright.”  On tonight’s show After Lisa leaves the trip, the ladies almost get arrested, before returning to BH to send Kimberly and Gigi to college.  Did you watch last week’s episode?  We did and we recapped it right here for you.

On last week’s episode all the ladies, except Carlton, headed off for a vacation in Puerto Rico. The relaxation didn’t last long after Yolanda and Brandi confronted Lisa about the doubts they have regarding their friendships. A battle royale erupted over dinner, and Lisa and Ken leave the table, calling it a sabotage attack.

On tonight’s episode the trip to Puerto Rico finishes with a day of golf, shopping, and the threat of arrest, all happening after the ladies learn about the shocking and mysterious departure of Lisa and Ken in the middle of the night. Back in Beverly Hills, Brandi surprises her parents with the help ofYolanda. Then, Kim and Yolanda have tearful goodbyes when their daughters Kimberly and Gigi depart for college. Meanwhile, Lisa pours her heart out to Carlton about why she left Puerto Rico in the middle of the night.

Lisa and Ken left the island which only makes them look guiltier to everyone else still there. So whoever came up with that idea didn’t think it fully through because the people who stayed such as Brandi and Yolanda are still sticking to their stories. They told Kyle to not trust Lisa but up to heard about Lisa’s early departure she was still trying to giving the other woman the benefit of the doubt. Now that she isn’t there to tell her side though then it doesn’t really matter. Seeing as Lisa has been judged and found guilty.

Not that anyone is mourning her loss. The rest of the group (Lisa’s former partners in crimes included) ended up enjoying themselves more with their favorite Brit gone. In one of the rarest moments – no one else caused drama for the remainder of the trip.

And when they returned home; some people like Brandi, had learned the true value of friendship. She appreciated how much Yolanda has been there for her in the past especially with her father. Brandi and her dad were going through a hard time in their relationship and she didn’t know if they would ever be able to mend fences. However Yolanda changed all of that for her. She talked to Brandi’s dad and got him to start listening to his daughter again. That was an act of true friendship. Very much unlike Lisa who basically ditched her during this time.

That’s why when Brandi came back from Puerto Rico she had Yolanda help plan a surprise for her parents. The older couple have always worked despite numerous health issues and Brandi wanted to do something for them. So she actually surprised them with a brand new car for her mother’s birthday.

Meanwhile Lisa is across town with Carlton of all people. Although the two have never shown signs of being close before they now are opening up to each other. Maybe it’s because they were both British but Carlton was able to understand how hurt Lisa was. Lisa had broken down into tears just thinking about how her best friends “turned” on her.

Lisa honestly felt she was under attack in Puerto Rico. It’s why she didn’t wait around for what she thought was another round. How was she supposed to know that the girls felt sorry about getting that harsh with her. The ladies even came to the conclusion that it would be best to have a calm and rational discussion with Lisa. And also Kim was going to apologize to Ken but none of that got to happen.

Nor will Lisa know what she’s missing out on. She hasn’t reached out to any of the ladies once they all came back and she told Carlton that she wanted to stay under the radar. Yet what she thinks is non-confrontational is seen as cowardice by others. Yolanda feels an adult should be able to answer a few questions without then having to run away.

Yolanda doesn’t necessarily have time for an argument but she would prefer it over complete silence. At the moment though she has her hands full with her daughter, Gigi. She and Gigi are rearranging Gigi’s apartment for when she starts school. The original plan was for Gigi to stay on campus and then the roommate had pulled out. So Yolanda ended up doing the same.

Kim would best understand how hard this is for Yolanda. She’s saying goodbye to her daughter as well. Kimberley will only be an hour and a half away but Kim still went above and beyond for her. She packed so many things to make her daughter’s first year at college be an easy transition that there isn’t enough room for everything.

This is hard time for both women. In equally tear jerker of a scene, they’ve both had to say goodbye to their babies. While back at home, Kyle and Carlton get to appreciate being around their daughters that are still small and need their mom’s. Like when Kyle’s girls got their ear pierced and needed to be held by her. If someone were to ask Yolanda or Kim then they would give anything to go back to that stage instead of setting up living space for their kids away from their homes.

Sadly, drama is stirring on the home front. Lisa chose at the last minute to go to Commerce party but Ken doesn’t want to go. He’s upset from what happened in Puerto Rico and doesn’t wish to have his wife “attacked” again. She convinced him to go even when she shouldn’t have. His mindset is that they’re done with their “friends”. So how is he going to react when he sees the group all together again?