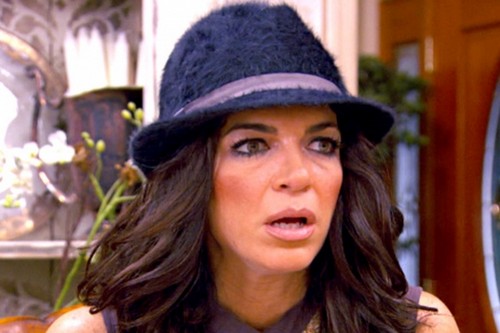 Tonight on BRAVO our favorite Housewife show THE REAL HOUSEWIVES OF NEW JERSEY returns with the third episode of season six called, “Trash-Talking.” On tonight’s show Joe and Melissa are hoping to rake in the money with their new business — a state of the art trash truck. Meanwhile, Teresa focuses on her dessert line, Fabilicious, and invites friends and family over to try out her new recipes.

On the last episode Joe and Melissa were hoping to rake in the money with their new business — a state of the art trash truck. Meanwhile, Teresa focused on her dessert line, Fabilicious, and invited friends and family over to try out her new recipes. The taste-test turned sour when Teresa broke down under the stress of her family’s trouble with the law. While Amber felt badly, the Giudices’ legal situation had her mortgage-broker husband, Jim, keeping his distance. And when the twins heard that someone had started a rumor about Nicole, it became clear that things were about to get messy. Did you watch the last episode? If you missed it we have a full and detailed recap, right here for you.

On tonight’s show Melissa tries to keep Christmas traditions alive, despite living in a rental home, while Dina feels more alone than ever as her daughter applies for college. Amber becomes consumed with home safety, while Teresa Aprea decides it’s time for her son to join the family empire. Teresa Giudice’s legal woes hang heavy over her family’s head as she struggles to keep things normal for her girls.

Tonight’s episode of The Real Housewives of New Jersey starts off with a bit of drama between Joe and Melissa. The family recently moved into a rented house while Joe builds their dream home. He also has sunk a ton of money into his business, so much that the house is going to take longer than planned. Melissa was expecting to have it done in a matter of months and is quite ticked to learn otherwise. Meanwhile Teresa is launching another Fabelinni product and that means an official photo shoot and a launch party. In other words Teresa is tossing away lots of money on nonsense but even more shocking is her daughter Melania’s mouth. They say that little kids imitate what they say and hear and my guess is Melania is just like Teresa- once the cameras leave.

The cameraman wants one photo with the kid and a tantrum would have been better than watching her tell him that his new name is “butthole” in between calling everyone annoying and refusing to cooperate!  Melissa and new housewife Amber used to be friends back in the day, long before they were married. When they reconnected Melissa found out that Amber had breast cancer a few years ago and claimed to have had no idea. They are trying to reconnect as girlfriends, by gossiping about everyone else- especially the twins Teresa and Nicole.

The gang all shows up to Teresa’s house for her Fabelinni party and Amber apologizes to Teresa for the possibility of anyone offending her at her Harvest Party awhile before. She then launches into tearful  understanding of all that Teresa is going through and basically makes a big scene which pisses Dina off. Dina of course suspects that Amber is putting on a show just to get in tight with Teresa.

The twins, Teresa and Nicole decide to get to know Teresa and Joe and they head out to dinner together.  Twin Teresa and her husband offer their support to the Giudice’s and they all plan to get together again. Joe G announces that he usually hates meeting new people but on this night he was glad he took the leap.

Melissa and Amber continue their girl bonding and while they are out her husband Jim is juggling the kids. His good friend Bobby (Nicole’s boyfriend) stops by with a boatload of McDonald’s- something that the kids never get. They have fries and milkshakes galore. Bobby wants to have a guys night out and upon inviting Jim, Jim tells him that he can’t go because Joe G. will be there. Jim is the president of a mortgage company and doesn’t want to risk running with someone who plead guilty to bank fraud.

Dina’s daughter applied to NYU and finds out that she didn’t get in. Lexi is crushed to learn that she wasn’t good enough. Dina makes it momentarily better by giving her a bracelet and encourages her not to give up hope.

The guys not out includes not only bowling- but Rosie. The gang is together for a short while and everyone wants to know why Jimmy didn’t show up. Bobby tries to blame it on the two Joe’s fighting and they seem to believe that at least momentarily. Bobby is having a first responders party because he has devoted a lot of his life to first responders since Hurricane Sandy.

Melissa goes shopping with the twins and it takes no time  for them to explain to her that Jim is avoiding the Giudices.  Melissa is ticked because Amber has reached out to her and she was under the impression that their husbands would get along too, now she’s questioning it. Melissa then tells Nicole that it was insinuated by Amber that she is a homewrecker and cheated on her husband before her divorce.

Teresa meets with Dina’s psychic and it’s shocking because the first thing that he asks is if Joe’s father has passed over. At that point he was alive but did die shortly thereafter. He also tells teresa that jail for her is unlikely but Joe will not get off. She and the kids will be fine but Joe will struggle. This episode ends with the twins parked outside of Amber’s house with Nicole ready to confront her. Tune in next week for me RHONJ.