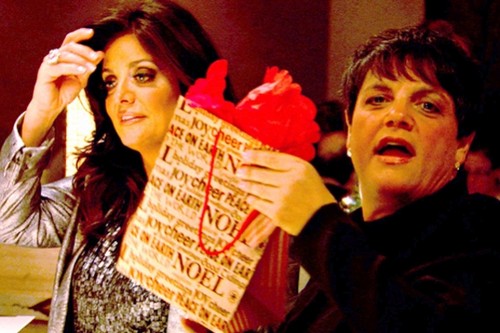 Tonight on BRAVO our favorite Housewife show THE REAL HOUSEWIVES OF NEW JERSEY returns with the second episode of season six called, “O, Christmas Tre.” On tonight’s show Melissa tries to keep Christmas traditions alive, despite living in a rental home, while Dina feels more alone than ever as her daughter applies for college.

On the last episode Teresa Giudice and her husband, Joe, fought to keep their family intact as they embarked on a very public legal battle for their freedom. Fortunately, Teresa had support from her sister-in-law, Melissa Gorga, after resolving a long time family feud, and veteran housewife Dina Manzo, Teresa’s oldest friend who was dealing with a public divorce. Joined in the chaos is Melissa’s long-time friend Amber Marchese, a breast cancer survivor, as well as identical twin sisters, Nicole Napolitano and Teresa Aprea. Sparks flew almost immediately when everyone got together for a Harvest Party as Amber confronted Melissa about not being there for her when she had cancer. Did you watch the last episode? If you missed it we have a full and detailed recap, right here for you.

On tonight’s show Melissa tries to keep Christmas traditions alive, despite living in a rental home, while Dina feels more alone than ever as her daughter applies for college. Amber becomes consumed with home safety, while Teresa Aprea decides it’s time for her son to join the family empire. Teresa Giudice’s legal woes hang heavy over her family’s head as she struggles to keep things normal for her girls.

Tonight’s episode of RHONJ has everyone prepping for Christmas in their own special way. The Giudice’s are doing their version of a low key Christmas and spending it at home. The whole family is supposed to be helping to put up the tree but Milania is shooting off her mouth as usual. She is way worse than Gia at this point and I still suspect that both kids talk just like Teresa does when the cameras aren’t rolling. Meanwhile the Gorga’s are currently living in a rental home that Antonia thinks is disgusting because it’s too small. Of course it’s still bigger than all of our houses combined!

Amber is kind of a piece of work, isn’t she?  She is classic Jersey girl but after the whole cancer snub on last weeks’ show I’m not sure if I trust her. She’s quite the perfectionist and a control freak so when one of her kids smashes her Ginger Bread house the meltdown is epic. I know that Amber and Melissa used to party like crazy together but I have a hard time imagining it.

Dina is using her menagerie of animals to get her through her separation and also watching her daughter head off to college. She and Teresa the twin seem to be hitting it off quite well. They are bonding over divorce and the fact that kale is everywhere. Meanwhile back at the Giudice’s Milania seems to be breaking more ornaments than hanging them. Teresa and Joe have a teary eyed chat over having great kids in spite of their legal issues.

where they are going to build and roll out the house plans. They also end up discussing Teresa and Joe’s legal trouble. Joe Gorga wishes that his sister would confide in him a bit more about what is really going on.

Now that the entire family is getting along all of the cousins decide to meet for an early Christmas dinner out. Kathy and Rosie are there and discuss all of the court stuff with Melissa. Teresa and Joe are driving to the restaurant discussing how badly the family used to stress them. Now she talks about how they have bigger concerns. From the sounds of thinks Rosie and Kathy haven’t seen the Giudice’s in at least 6 months. Melissa seems to really want to support Teresa and I kind of hope that she’s not going to be taken advantage of.  Melissa toasts the family and wishes they got together more often.

The twins, Nicole and Theresa are having a holiday meal with their family and Nicole complains a lot about living with her parents still. She went home to them after her divorce and they seem to control her relationship with Bobby than she is.

Christmas in the Giudice home was still pretty extravagant, all things considered. Lots of gifts and they ended up with a real  live fluffy white puppy but argue over the name. Nicole is lonely when her boys are with her ex and unfortunately they go on Christmas day. Bobby shows up to give Nicole her gift and it’s a high heeled bottle holder. Obviously it shows where the relationship is at.

Joe Gorga wants his dream house built in 9 months start to finish because Melissa is complaining non-stop about their cramped rental. The couple take the kids sleigh riding and Joe finds out that his tongue will indeed get stuck to metal. Christmas night the Giudice’s tuck all 4 kids into a big bed with their new puppy and it’s kind of sad. Even Joe does seem to be realizing how damaging his shady behavior will ultimately be to these kids. He tells them that all they will have is each other eventually. Teresa clearly is the calming force and she reassures Joe that they will have more Christmas’ together. Tune in next week for more RHONJ!