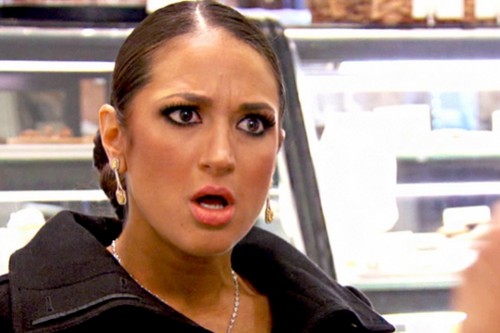 Tonight on BRAVO our favorite Housewife show THE REAL HOUSEWIVES OF NEW JERSEY returns with the sixth episode of season six called, “The Family Business.” On tonight’s show it’s a family affair in New Jersey as Melissa and Joe strive to take their new age garbage business to the next level, and Teresa and Rino embark on plans to expand their family’s restaurant empire.

On the last episode Tempers were still fiery as the first responders party comes to a dramatic conclusion. Amber’s husband Jim went on the offensive with Teresa Aprea, while Nicole demanded loyalty from her boyfriend Bobby. Dina tried to warm up to a new man in her life, but her feelings towards her ex still flicker within. Melissa and Amber have a sitdown to hash out just who started the rumor heard round the Jersey grapevine. Did you watch the last episode? If you missed it we have a full and detailed recap, right here for you.

On tonight’s show it’s a family affair in New Jersey as Melissa and Joe strive to take their new age garbage business to the next level, and Teresa and Rino embark on plans to expand their family’s restaurant empire. Nicole and Bobby, meanwhile, try to prove Amber wrong with a little PDA, and Rosie introduces her girlfriend to the family. Isolated from the rest of the group, Amber turns to her own family for support, until a phone call from Nicole changes everything.

This past week stories hit the tabloids about Melissa and Joe Gorga’s finances and how they have borrowed from everyone around them to fund their lifestyle. In the opening scene of tonight’s episode the couple is at a car dealership and while Melissa does have the Bentley, she would now like a truck. Something that makes a ton of noise so that everyone would turn and look at her as she drives. That about sums up Melissa’s priorities right there.

The only think slightly more nauseating is watching Jim and Amber prepping their kids to view next business commercial. It’s their young sons’ directorial debut- unquote. Of course Amber thinks that the whole thing is hilarious but that’s not the word I’d use. Why did Bravo hire Teresa and Nicole- the twins again? I guess for tonight it’s so that they could throw another party and invite the Gorga’s and Giudice’s.  Nicole and Teresa confront Melissa about all of the conflict with Amber and she tells them to work things out with Amber rather than circling with her.

Good old Rosie is at this party and she is in love with a woman named Ellen. It’s so nice to see Ro as happy as she is here. Kathy and Richie are also at this dinner (held at Rino’s restaurant) and the family seems to be getting along really well, finally. As for Rosie, Melissa describes her as all in love with chirping birds. The day after the dinner Nicole calls Amber from her place of business to try and at least arrange a meeting. Nicole wants to extend an olive branch because she thinks that bitterness is like leprosy for the soul.

It’s Gia’s 13th birthday and Teresa is reminiscing back on when she was a baby and her life was so simple. Every scene features an exasperated Gia whining at “Mel-An-Ea” to stop wrecking her room. Milania also hid Teresa’s main gift for Gia in the refrigerator.

Rino is building a new restaurant in Jersey that is intended for his wife and son to basically run. He takes Teresa to see the property or where it will be. Teresa’s father is a builder and he is in charge of putting together from the restaurant from the ground up. Teresa says that working with the family is explosive but she seems to be the one running conflict.  Back to Gia’s birthday. At 13 she doesn’t want a party. Teresa gives Gia a ring that was given to her by her family. Now comes the Joe and Gia bonding moment. For the first time I can see the bonding moments between them. I’ve never thought that there was much of a connection between them but here I see it. They discuss the boy that she has kissed which is kind of cute.

Okay this is kind of funny. Joe is using Melissa to try and be the main force for his new environmentally sound business.  He thinks that she has the look that will make men just say yes to her and while meeting with a scientist Joe gets it right. Teresa meets with Dina to make a Vision Board to envision where she wants her life to be in a year. Teresa confesses that she has been driving around her town looking at smaller houses because they’ll need to downsize. Dina is happy to see Teresa downsizing and becoming free of all of the material crap.

Amber and Nicole finally sit down and talk and Amber tells Nicole that she had been told that she broke up a family. I’m not exactly sure why Amber is so mad, she said it and yet she keeps pointing a finger at Melissa. Amber’s the one who either made up or repeated the rumor so being upset or trying to pass the buck here makes no sense. Nicole actually apologizes for ripping out Amber’s hair and Amber kind of retaliates by telling her that her boyfriend Bobby is a gigolo. They both decide to make amends and to try and get past everything that has occurred.  Amber claims to feel completely alone in this group of women and she should! Tune in next week for more RHONJ!