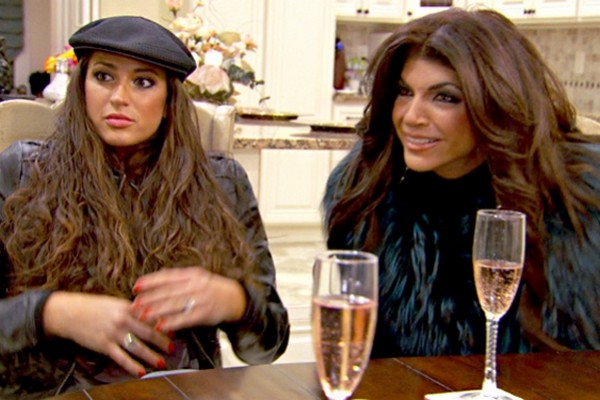 Tonight on BRAVO our favorite Housewife show THE REAL HOUSEWIVES OF NEW JERSEY returns with the seventh episode of season six called, “Roses Are Red, Dina Is Blue.”  On tonight’s show Roses are the flowers of choice in the Garden State as the ladies celebrate Valentine’s Day in their own unique ways.

On the last episode it was a family affair in New Jersey as Melissa and Joe strived to take their new age garbage business to the next level, and Teresa and Rino embarked on plans to expand their family’s restaurant empire. Nicole and Bobby, meanwhile, tried to prove Amber wrong with a little PDA, and Rosie introduced her girlfriend to the family. Isolated from the rest of the group, Amber turned to her own family for support, until a phone call from Nicole changed everything. Did you watch the last episode? If you missed it we have a full and detailed recap, right here for you.

On tonight’s show Roses are the flowers of choice in the Garden State as the ladies celebrate Valentine’s Day in their own unique ways. And in a shocking turn of events, Victoria Gotti reveals a scandalous rumor to Amber and Teresa that could shake the group’s foundation to its core.

Amber and Melissa haven’t gotten along on The Real Housewives of New Jersey in recent weeks but when Melissa’s aunt passed away it was actually Amber that showed up at her door. Her aunt had stage 4 cancer and since Amber battled cancer she connects with anyone dealing with it in any way so she wanted to be supportive. She brought Melissa soup and the sentiment clearly means a lot to a teary eyed Melissa.

Nicole has been dating Bobby for nearly a year and as Valentine’s Day rolls up her mom is trying to figure out where the couple is headed. She thinks that Bobby is a confirmed bachelor and that by a year into the relationship they should be engaged. She also believes that Nicole’s nonchalance is an act and that she wants clarity too.

Melissa decides to go over to hang out with Teresa since Joe has taken all the kids to the movies. The ladies curl up together with glasses of wine to watch The Godfather together. Dina is still struggling to let go of her marriage once and for all. She can’t pull the trigger on her marriage to Tommy just yet, it’s not time yet.

Nicole heads over to her twin sister Teresa’s house and she throws herself a photo shoot for her boyfriend. Teresa is trying to figure out Nicole’s love life just as much as her mother did. Teresa says that she likes Bobby but she’s not sure that he is marriage material.

We finally get to see what a business meeting between Teresa and Joe looks like.  He kinda seems to keep track of when products such as Fabellini will arrive and Teresa is in boss lady mode. She wants everything written down so that they can keep track of the details. Dina wakes up on Valentine’s Day and is feeling sorry for herself. She’s drowning in her daughters box of chocolate and crying to her assistant.

The Gorga’s are celebrating Valentine’s Day at a romantic Italian dinner and during the convo we learn that Joe took their son to the wrong school, because he had no clue where he went! He actually had to call Melissa to ask where their son went to school! Teresa and Nicole’s family are also together to celebrate. Rino makes a toast to all of the women and then they start discussing their most romantic moments. Rino and Teresa got married at 18 and were divorced by 28 and then they married for good. Nicole blurts out that her mom wants to know if Bobby is a confirmed bachelor.

Bobby makes it clear that he wants to take it slow in order to be sure that they belong together. Bobby assumes that he is Nicole’s prince. Teresa has a wine appearance and says that she is always nervous that people won’t show up. Amber goes to hang out and Victoria Gotti also shows up and invites both to her house afterwards.

Joe Gorga knows that his wife is sad and so he surprises her and the kids with a puppy. Melissa loves that this is what Joe does, he goes above and beyond to make them happy. Amber and Teresa head over to Victoria’s and she starts dishing details on Rino and his wife.  She tells a story of meeting Rino a few years ago and needing heart surgery a few weeks later. She woke up with Rino in her hospital room with flowers, food and a Rolex for her. He thought this was normal. At the time Rino and Teresa was divorced and he started dishing details on his split. He claimed that Teresa would never take him back because Rino slept with Teresa’s mother. This turns into a PSA on Victoria’s behalf saying that you never judge people until you walk in their shoes.  Tune in next week for more RHONJ!