BY Kristine Francis on May 20, 2014 | Comments: 2 comments
Related : Real Housewives of NYC 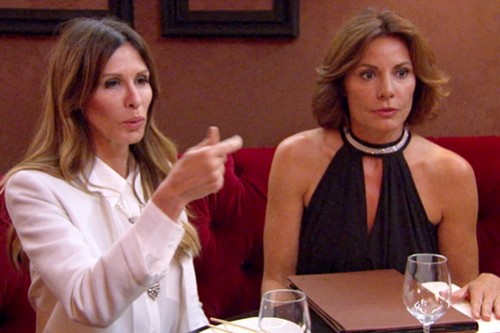 The Real Housewives of New York have returned to Bravo with a bang for season 6 and tonight’s new episode is called “The Ramona Trap”. The ladies confront Ramona about past behavior. Elsewhere, marital dissension plagues Kristen; LuAnn invites Carole on a double date; and Ramona sets out to make peace with Kristen.

On last weekend’s episode Heather attempted to calm the quarreling Kristen and Ramona with a dinner fit for a King. The next morning, the women were hiking in the woods when Ramona stumbled upon something that brought out her worst childhood horrors, causing her to flee the Berkshires. Then, the ladies enjoyed a relaxing afternoon of sunbathing, swimming, and hitting on young men before a final dinner out where they devised a plan to give Ramona her “just desserts” for abandoning them under suspicious circumstances.  Did you watch last week’s episode?  If you missed it we have you covered with a full and detailed recap, right here for you.

On tonight’s episode back in New York City, the women confront Ramona about her bad behavior, specifically, ditching them for a party in the Hamptons. LuAnn invites Carole on a double date, but will Carole’s awkward dating behavior end it before it begins? In a last ditch attempt for reconciliation, Ramona apologizes to Kristen, but Kristen may not be ready to forgive.

Ramona’s past behavior has finally managed to catch up with her. Her “friends” have had enough of the way she treats them and so they’ve decided to have a dinner. This seemingly innocent dinner will hopefully give each of the ladies a chance to tell Ramona what she’s done to them and how they feel like she needs to change.

However there is one possibility standing in the way of this little intervention and that’s entirely based on Ramona responds. She’s known to fly the coup whenever she feels like she’s being questioned and/or threatened. So the ladies have concocted a bullet-proof plan – they’re going to ambush her while she’s trapped.

Kristen was invited to come along for the dinner, but she knew she wasn’t ready to speak to Ramona in a calm manner. The last time the two women met; Ramona threw a glass at her and had accidentally cut the other woman’s lip.

And that was one of the first things the ladies brought up to their friend when they met for “dinner”. To get to that point though they had to arrange a way to lock Ramona in a booth.

Here’s how they corrected Ramona’s fight or flight problem. They waited till she got there and then arranged to be out of the picture while she took her seat. It was a booth and so once she was seated – someone came in on both sides of her to smush her in. Sounds dramatic and yet this is what qualifies as getting Ramona to listen to other people’s version of events rather than shout her own before fleeing the scene.

So does that say more about Ramona or about her friends? They’re the ones that feel like they needed to confront her when they could have just as easily walked away. Sonja went as far to point that out to Ramona too. They’re only sticking around now because they care. They want Ramona to be able to deal with her issues and at the same time they’re tired of her using her past an excuse for everything she does that they don’t agree with.

Ramona, after a while, admitted to having a problem. She knows she has issues and had implied she would seek out help for them. Her friends were pleased by that, but LuAnn suspected it was story to get them shut up.

She’s known Ramona for a long time and so she didn’t believe Ramona would suddenly do a 180 about her behavior. And she was right! Ramona called “bull” in her confessional right after telling her friends she’ll think about therapy. She had discussed the dinner over with her husband and he had agreed with her assessment. They thought her friends were being harsh and way too aggressive. And that there’s nothing wrong with her seeing as she’s managed to function just fine without shrink getting involved.

The ladies should have done a follow up. It was barely a day after their intervention that Ramona slid right back into her old patterns.

She met with Kristen to apologize and somehow that turned ugly so fast that it was startling a third object wasn’t thrown during the fray. It started off nicely enough. Ramona profusely apologized over and over again. And then it went downhill around the time Kristen refused to “just” get over it. According to Ramona, one of things that she doesn’t like about Kristen is how she plays up the victim card. So when Kristen demanded Ramona take what she did to her seriously – Ramona started to laugh.

She wasn’t taking Kristen feelings into consideration at all and when asked if there was something wrong with her – Ramona said she was fine the way she is. But no one believes that story. And why would Kristen give her the benefit of the doubt?

Kristen had already had a lot of crap from her husband earlier (he barely wanted to spend quality time with his family) so dealing with Ramona on top of that probably made her react more strongly that she normally would have. She got upset at their meeting and Ramona stuck to old familiar patterns – she quickly made up excuse to leave early.

Let’s see if he calls…