The Real Housewives of New York RECAP 3/18/14: Season 6 Episode 2 “Give Up the Ghostwriter” 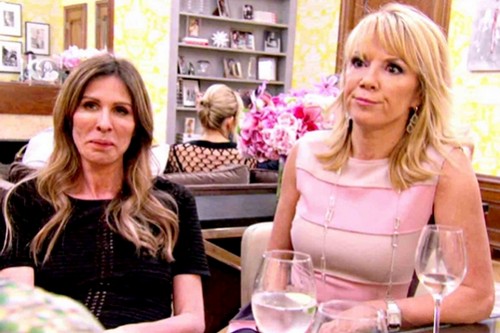 The Real Housewives of New York have returned to Bravo with a bang for season 6 and tonight’s new episode is called “Give Up the Ghostwriter”. When Aviva scores a book deal for her memoir, she decides to meet with Carole, the renowned author of the group, for help.

Their lunch quickly turns uncomfortable and things get ugly when the topic of “ghostwriters” is mentioned. Aviva hosts a housewarming at her new Upper West Side townhouse where Ramona sets Carole off by spreading some damning gossip.

On the first episode of season 6 the ladies were back and fierce as ever. Heather hosted her own birthday party, but no one is looking forward to seeing Aviva after some of her past eyebrow-raising behavior. The ladies were also introduced to Heather’s longtime friend Kristen, a working model and mother-of-two.   Did you watch last week’s episode? If not we recapped it right here for you!

Trouble is brewing between Aviva and Carole. Lately Aviva has been on a new kick of sucking up to all the ladies but her attempt to flatter Carole blew up in her face.

The ladies met for what should have been a nice lunch. And then things became awkward in the sense that Aviva was being too salacious. She managed to weird out Carole by going out and buying her exact same glasses, but the real trouble started when they got to speaking about Aviva’s new book.

It’s Aviva’s first book and she was acting like all the hard work she put into was no big deal. She said it was like writing an e-mail which was just insulting to Carol. You know the woman that made a career out of her writing. So maybe it was that casual comment that leads to Carol having a condescending attitude.

Aviva didn’t take too well it and suddenly the women were both asking each other whether or not they used a ghostwriter. It’s the worst thing to say to any writer and luckily the lunch was cut short. However the women weren’t able to let go of their anger. Later they were each telling their side of the story to the rest of the girls.

But unlike Kristen and Heather who were fully buying Carole version of events, Ramona suspected Aviva of trying to play her. She knew that Aviva wanted to drag her into another fight and wasn’t having it. Heather and Sonja on the other hand have chosen to take sides.

Sonja invited Kristen over for what turned out to be a somewhat uncomfortable tanning session. What Sonja really wanted was to get the dirt on the Carole/Aviva conversation, but that doesn’t mean she didn’t also want to check out Kristen’s goods. It was nothing sexual though. She simply wanted a comparison between herself and Kristen’s model physique.

Once Sonja heard the story, she instantly thought that Carole was being too prissy. She couldn’t understand why Carole tried to put down Aviva for writing a book as well. And just because Carole claims she wrote her book over five years doesn’t mean anything. The rest of the ladies were busy with careers and families so they didn’t have the time to take 5 years off.

Never mind the fact that Sonja is constantly starting projects and not finishing them; she still felt that no one should have tried to trash Aviva’s accomplishments. Meanwhile Heather, despite all the more important things she has to deal with, also took the time to get to the bottom of the Aviva/Carole fight.

She met with Aviva at the nail salon, but chose to confront Aviva on her book rather than discuss the disagreement. She asked Aviva about a ghost rider and if the book is about her leg. Yet it was the way she phrased her questions that were rude. She basically implied that unless Aviva wrote about her leg then no one was going to want to read a book by her seeing as she isn’t well-known or a celebrity.

Although Aviva was coy about what was honestly in the book. She kept giving a run around and so Heather felt she was full of crap.

Everyone has taken sides in this fight that no one has come right out and called a fight yet. But to her credit, Sonja did not say anything to Harry to about it. The two went out for another one of their dinners and they mostly spoke about their relationship.

Harry even brought marriage. Not in a serious context but more in the hypothetical though it still counts that he threw it out there. Sonja hasn’t seen him as the marrying kind and she’s smart enough to know that he’s only fishing because he doesn’t like sharing her with Ben.

The idea of marriage wasn’t even his. Aviva mentioned it to him when he was visiting her new apartment. She was saying it as a joke to rile him, but who knows maybe she planted an idea.

When Aviva was hosting her house warming party, everyone of course attended. A fight will never stop this crowd from attending a party. Which essentially meant that Aviva was off in one part of the apartment bad mouthing Carole and Carole was doing the same in her own corner. And they probably would have kept on going like this if Ramona hadn’t put an end to the whispering.

Ramona was hearing from Aviva that Carole had a ghost writer and so she went to Carole and told her what Aviva has been saying. She told Carole to just go and discuss everything with Aviva, but swears she didn’t know it would lead to a shouting match.

Aviva and Carole both had their issues with the other. Aviva said Carole wasn’t supportive and was pretending like she didn’t put in any work into writing her book. As for Carole, she took issue with Aviva claiming to be a writer when she’s the one that has devoted twenty years to her career. Plus this recent rumor that Carole had a ghostwriter is degrading not mention that Aviva even claims to have a name for this ghostwriter.

And as they continue to not listen to each other or at best acknowledge their own part in this argument they then starting getting loud enough for the partygoers to hear.

Whatever happened to being fake nice? That way everyone could get along!