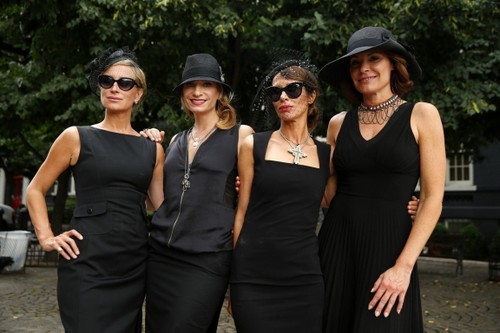 The Real Housewives of New York have returned to Bravo with a bang for season 6 and tonight’s new episode is called “Requiem For A Poodle”. Sonja reaches out to a spiritual healer. Meanwhile, Kristen auditions for a workout video; Aviva’s father returns with a surprise; and the ladies assemble for a memorial for Sonja’s dog.

On last weekend’s episode back in New York City, the women confronted Ramona about her bad behavior, specifically, ditching them for a party in the Hamptons. LuAnn invited Carole on a double date, but will Carole’s awkward dating behavior end it before it begins? In a last ditch attempt for reconciliation, Ramona apologized to Kristen, but Kristen may not have been ready to forgive.  Did you watch last week’s episode?  If you missed it we have a full and detailed recap, right here for your enjoyment.

On tonight’s episode Aviva’s controversial father, George, returns, and this time, he has a surprise in the form of a new lady friend. Everyone gathers to bid Sonja’s dog adieu in a memorial like no other.

Kristen is still learning the ins and outs of the New York Housewives. After her bizarre run-in with Ramona, she felt a bit nervous around the other women. It’s not like it’s a secret that they’re Ramona’s friends and so she didn’t know how to voice her opinions without offending them. Though she didn’t have a reason to worry – they were actually pretty understanding of Kristen’s position. How could they not be? They know Ramona is crazy and as matter of fact they have a file full of nicknames just for their “friend” when she goes off the rails. So they weren’t offended to hear about Ramona’s latest shenanigans. It just became another anecdote for them.

Speaking of odd behavior, Sonja has decided to entertain her friends as well. She wants to host a memorial for her dog. He was with her for 18 years and losing him has been tough on her. That’s why she wants to let him go with a proper goodbye. Her friends on the other hand are merely glad they get to wear black and go shopping for a new hat.

And more than just letting go physical – Sonja had to get a guru to help her let go of her dog spiritually. It sounds bizarre, but it turned out to be helpful in more ways than one. The “guru” helped her understand why she was holding on to a dog so tightly. It was because she felt like he was one of the few pure things left in her life. Also she was tired after being let down by her so-called friend Ramona that she needed a dog she knew would love her unconditionally.

So Sonja is planning on re-evaluating her friendships and it seems that Aviva made the cut. She attended a dinner party at Aviva’s where she had a run-in with George and his new girlfriend.

George attended the dinner with 25 year old girlfriend. Officially they’ve been seeing each other for the past 2 and ½ years and yet this is the first time she’s meeting Aviva. Aviva doesn’t like meeting her dad’s passing girlfriends. She doesn’t think those types of girls deserve her notice so she told her dad to only make an introduction when one of them became serious. And, well, her dad’s serious now. George proposed (sort of) in front of everyone and his young lady love said yes.

So Aviva’s new stepmother is going to be young woman in her twenties that her dad met while he was waxing his scrotum.

Meanwhile Kristen is back at work. She wasn’t getting the modeling jobs as much as she used so she decided to try out the exercise video route. And what she found out is that she’s woefully out of shape. Kristen didn’t realize she needed the work out until it was tiring her so she was even more excited about doing the video.

Yet her husband was standing in the way of her being happy. Usually he can’t find the time to be there for the family. When Kristen is working however – he tends to make the time. Though not in the role as the supportive husband.

Kristen’s husband keeps making these digs at her. So much so that it’s interfering with her work and making the other people on set feel uncomfortable. She had to ask him numerous times to leave before he did and even then he was dragging his feet.

Does he not want her to work?

Ramona worked up the courage to confront Ramona. She was still feeling raw about what happened between her and her former boy toy so she called her BFF for being a manipulative busybody. Ramona was quite taken back by what Sonja was saying, but once they got to drinking – the ladies were soon close again.

But Ramona wasn’t that good enough of a friend to attend Sonja’s doggy memorial. Everyone else was there so why wasn’t she? I didn’t spot her, did you?

As for the memorial, it started out ok. The only problem that came up was when Sonja was spreading the ashes out to sea. There was some wind and it kind of knocked some of ashes onto the sidewalk and on Sonja’s dress for instance. So there was that minor hiccup. Otherwise it was good memorial. And definitely worthy of a dog that had seen through some of Sonja’s darker days.