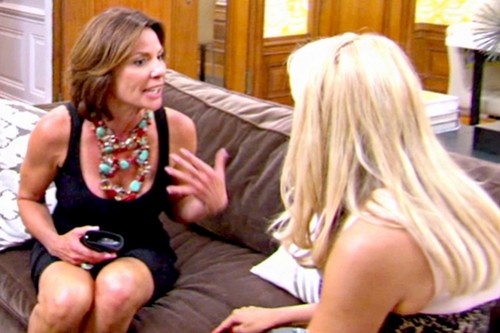 The Real Housewives of New York have returned to Bravo with a bang for season 6 and tonight’s new episode is called “Sex Lies and Facials”. In tonight’s episode, a Saratoga trip ends with a wives-gone-wild night on the town. Later, Ramona bonds with Avery before her college departure; Sonja’s facialist spreads gossip to Kristen; LuAnn throws a charity auction; and Aviva hosts an art party.

On last week’s episode Aviva’s sex-crazed father, George, had shocking news for Cody, his twenty-five-year-old girlfriend. Aviva decided to throw them a party at a surprising, yet fitting, museum. Can Ramona and George reconcile or was their dislike for each other ruined the night? LuAnn took everyone but Aviva and Ramona to Saratoga for a weekend of horse racing, drinking, and man chasing, but Sonja partied a little too hard and things quickly get out of hand.  Did you watch last week’s episode?  If you missed it we have a full and detailed recap, right here for you.

On tonight’s episode Sonja’s gossipy facialist spills secrets about the women to Kristen, who shares what she heard with Carole and LuAnn, who angrily refute the stories. LuAnn hosts a charity luncheon where Aviva sends around a naughty text that royally ruffles the Countess’ feathers.

The trouble down south managed to work itself out. Sonja was upset that her friends left her at the races and in her drunken stupor — she threatened to catch a late night flight back home without them. But her friends know her better than they let on. They realized if they ignored her long enough — Sonja would come back ready to “forgive” them for their earlier lapse. And that’s exactly how it happened.

Sonja came back and made a point to be on her best behavior. Which, thankfully, meant no more yelling like a mad woman at her friends. So everyone was able to get along after that and they even went all together to party.

Then back at home, LuAnn arranged for charity lunch. This time though she remembered to invite everyone (that includes Aviva and Ramona) to come. But her friends managed to embarrass her in front of the other guests.

Aviva got into a childish bidding war with Carole. They were both vying for a dress when Aviva came out the winner. Although, Carole didn’t really want the dress to begin with. She just wanted Aviva to overpay for a dress she could never possible return. So, really, both of them were being petty.

That poor woman was in the middle of telling crowd what it was like to lose her mother to cancer when laughter could be heard coming from Aviva’s table. That was shocking behavior from Aviva. Normally, LuAnn never would have pegged her as being the troublemaker at a charity function. It was something Ramona would have done.

Yet Ramona waited till the lunch was over before she went to question Miss USA. The girl didn’t know what was going, but she did answer the questions. She never stayed over at anyone’s house and when Ramona alluded to a certain rumor — it was quickly denied. This young woman claims to never have thought of George in that way.

Though once LuAnn started to do some digging on her end, she realized her people never invited the beauty queen. And this makes Carole suspect that Aviva was behind the invitation. They were hanging out and thinking isn’t it funny that Aviva had an interesting story right when an unexpected guest showed up. Carole said Aviva tends to look for ways to be interesting and this opportunity did kind of fall right out of the sky.

Kristen eventually joined them on this outing and she also had a story to tell. Before she joined them she had a facial over at Sonja’s where the two ladies ran into a racialist with major gossiping issues. The woman claimed to have the dirt on nearly everyone and she was spilling it all. She told Kristen and Sonja that LuAnn sleeps around on her boyfriend with short French men. Then she went on to tell Kristen that Sonja slept with Carole’s boyfriend while the two were still together.

Carole doesn’t believe the Sonja story. She knows how much Sonja craves attention. And LuAnn was pissed some beauty specialist was running around town spreading lies about her.

But LuAnn overlooked this in order to deal with the bigger issue and that’s Aviva. Aviva was hosting an art party at her apartment. She wanted to showcase a new and upcoming artist so everyone was invited to come and (I’m just guessing here) envy her. And, according to LuAnn, it would be the perfect place to demand answers from Aviva.

Boy, did she forget how much that plan didn’t work with Carole!

LuAnn pulled Aviva aside to ask about Miss USA, but Aviva denied everything. She said she was so thrown at seeing the girl that she told Heather and Heather then passed the info around. Yet, Heather denies this. She had asked for permission from Aviva on whether or not she should share and after she got it — that’s when she showed her text from Aviva to Ramona.

Both Aviva and LuAnn are upset. And nothing gets solved other than the rest of the ladies agreeing not to attend another party. Like that could ever happen!