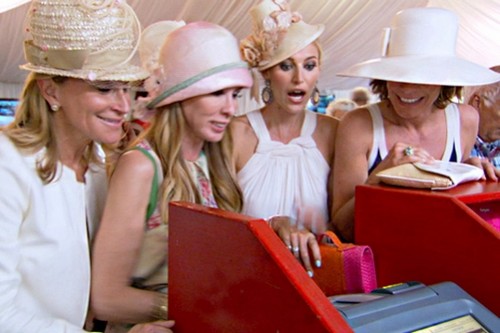 The Real Housewives of New York have returned to Bravo with a bang for season 6 and tonight’s new episode is called “Win, Place or Sonja”. In tonight’s episode, Aviva’s father delivers shocking news to his 25-year-old girlfriend, and LuAnn hosts a weekend getaway of horse racing and partying, leading to rising drama when Sonja celebrates a little too much.

On last week’s episode back in New York City, Aviva’s controversial father, George, returned, and this time, he had a surprise in the form of a new lady friend. Everyone gathered to bid Sonja’s dog adieu in a memorial like no other.  Did you watch last week’s episode?  If you missed it we have a full and detailed recap, right here for you.

On tonight’s episode Sonja’s gossipy facia list spills secrets about the women to Kristen, who shares what she heard with Carole and LuAnn, who angrily refute the stories. LuAnn hosts a charity luncheon where Aviva sends around a naughty text that royally ruffles the Countess’s feathers.

Cody is well-known manicurist down in Miami so what better way to feel her out than to ask for one of her special manicures. It allows her to be on comfortable footing and it also gives Aviva the chance to figure out what kind of person her future stepmother is going to be. In the past Aviva’s dad has dated his fair share of gold-diggers and with wide age gap between him and his new fiancée – Aviva was worried that he might have fallen into another trap.

However Aviva likes her even though her new stepmom is young enough to be her daughter. She feels like Cody really is marrying her father for love. Also it doesn’t hurt that Cody happens to be independently wealthy.

Aviva was so happy for her father that she arranged an engagement party for him and Cody. And because she in charge of the party – most of her friends were invited to share in the happy event. This includes Ramona!

Ramona has a mouth on her and when she opens it up – no one can foresee what’s coming. Earlier Sonja had warned her not to bring up Cody’s parents. Cody recently lost both parents and it was bound to be a touchy subject. Yet seconds after introducing herself and asking Cody what was the appeal about George – Ramona brought up Cody’s parents.

She threw them into the conversation after she stated that most young women that marry older gentlemen are in it for the money and power. And that’s when she said “You’re parents passed, right?”

It left Cody in tears and Ramona quickly left the party after she realized what she did. Cody and Aviva wanted to move past that minor scene, but the rest of the guests wanted to gossip. They were saying things like “typical Ramona” when George took it a step further by calling Ramona a bitch that deserved to be screwed by a dog.

George is just as outspoken as Ramona and the two don’t get on. So Ramona was probably hoping she could catch Aviva by herself when she came by the house the next day to make her apologies. She started out as apologetic though she quickly gave up on that in order to defend herself. Ramona said that she never intentionally set out to hurt Cody, but she did want to point out to the younger woman that maybe she was seeking to replace her parents by marrying George.

And when you think about – it isn’t that far off the mark. Cody is an only child and she lost both parents in quick succession. The one family member she has is a grandmother so Ramona wondered if Cody was seeking male role model. And that’s when George came in to interrupt.

He called Ramona all sorts of names and accused her of being a racist because she asked his black fiancée about her parents. While Ramona called him a lecher praying on young girl who doesn’t know any better. They’re fight finally ended once George told Ramona that he would lick his hand and put it on her dead corpse’ vagina at her funeral!

Everyone felt that Ramona was out of line at the engagement party, but George took it to whole new and icky level. Mercifully, the only witness to this fight was Aviva. The rest of her friends were lucky enough to be in Saratoga to enjoy the races.

Sonja grew up near the area so she counts herself as somewhat of an expert. Although her friends didn’t appear to want any of her expertise. They all betted on a horse that Sonja wasn’t confident about and ended up making over three grand.

Sonja wasn’t all that thrilled when her friends won and they did make it worse by celebrating right in front of her. So she walked away and while she was away – she refused to answer her phone. If she had then she would have known her friends were ready to leave. But because she didn’t – they left without her.

She showed up at the house later, drunk as a skunk, and ready for a fight. She argued with Heather and with Kristen. And when they didn’t cave in (to her being right) – Sonja packed her bag and left the house!