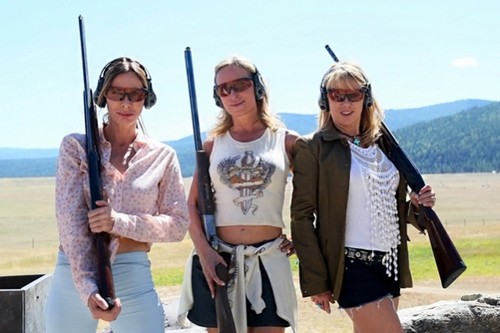 The Real Housewives of New York have returned to Bravo with a bang for season 6 and tonight’s new episode is called “Ten Gallon Spats”. In tonight’s episode, the ladies are set to escape the city and venture into big sky country: Montana! After procuring a doctor’s note, Aviva opts out of the trip due to a sudden horse allergy and asthma condition that nobody is buying.

On last week’s episode Sonja’s gossipy facialist spilled secrets about the women to Kristen, who shared what she heard with Carole and LuAnn, who angrily refuted the stories. LuAnn hosted a charity luncheon where Aviva sent around a naughty text that royally ruffles the Countess’ feathers. Did you watch last week’s episode?  If you missed it we have a full and detailed recap, right here for you.

On tonight’s episode the ladies are set to escape the city and venture into big sky country: Montana! After procuring a doctor’s note, Aviva opts out of the trip due to a sudden horse allergy and asthma condition that nobody is buying. The ladies hit the ground running in Montana, strapping on their designer boots and hats before heading out on a real-life cattle drive.

Kristen planned a trip for all the ladies. She wanted to take them to a ranch to Montana, but not everyone was pleased with her destination choice. A few days before, they sat down with Kristen to make the final arrangements — Aviva complained about Montana to Ramona. Now she’s telling Kristen she can’t make the vacation because of her asthma.

So, naturally, Kristen suspects Aviva is full of it. And she goes on to confront Aviva over this asthma the other woman has only recently developed. Kristen wanted to know why she’s never heard about it until this trip came up. Because, let’s face it, it isn’t lost on her that many of their set have been grouchy about the location despite it being at a five star resort. Hence Aviva finding an excuse to get out of it seems perfectly plausible.

Kristen told Aviva she didn’t believe her when they and Ramona went shopping for cowboy stuff. And so Aviva took out her doctor’s note (which she conveniently had in her bag) and when that didn’t work she then took out a bag of her medications to show Kristen that she’s not making anything up. She actually threw her prescriptions at Kristen and, as a final demonstration, she even used her inhaler. None of which impressed Kristen.

Kristen still thinks she’s lying and Aviva went to a whole new level when she called her friend a heartless bitch. Kristen’s husband doesn’t generally wade in on these, but even he, after he heard the whole story, thought Aviva went cray-cray.

Not one of the ladies thought Aviva couldn’t have made the trip if she really wanted to. And as Heather pointed out – people tend to move to Montana to escape their asthma problems caused by living in the city. So they all refer to Aviva as a drama queen.

And in case anyone wanted to defend her then coming off the flight would have easily made a fool out of them because Aviva the Diva had ordered a wheelchair to meet her in Montana after the flight. If she had come on this trip, then she would have stuck to the wheelchair playing the victim. It would have been ridiculous to watch, but the hateful truth is it also would have been probably the only entertainment these ladies had.

Montana is deserted! They arrived to find the airport deserted and they arrive at their hotel to find that deserted. Their cabins were reachable by wagons (a downside) and the ladies ended up being split into two groups. Carole went with Sonja and Ramona while LuAnn went with Kristen and Heather. And that could have been the perfect arrangement for everyone if the facialist hadn’t been brought back up. Up to then, everyone was enjoying themselves what with the horse riding and Sonja conquering her fear to get back on a horse in the first place. And then dinner happened.

They went out to this special restaurant that’s connected to a rodeo so that they can see cowboys in actions. Ramona hadn’t liked that smelled of manure, but she wasn’t harping on it either.

No, the one that popped the happy bubble was LuAnn. She was hurt by what the facialist was saying about her and she couldn’t understand why Sonja or Kristen didn’t just kick this woman out of the house then and there. And the ladies defending themselves by saying it was simply a funny story isn’t helping the situation.

LuAnn would have preferred her friends sticking up for her and the fact they didn’t has caused a problem with her that she’s been holding it in until they were all trapped together in Montana!