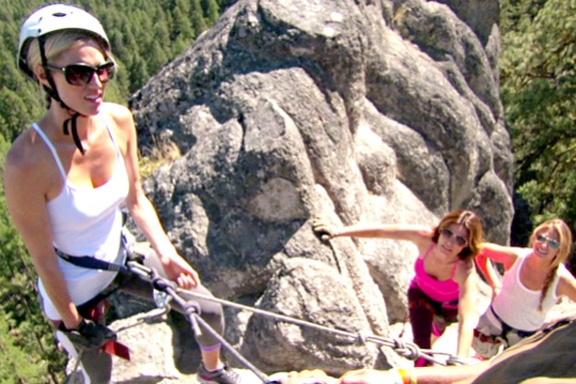 The Real Housewives of New York have returned to Bravo with a bang for season 6 and tonight’s new episode is called “Go Yell It On the Mountain”. In tonight’s episode, the ladies are halfway into their Montana adventure and tension between Sonja and LuAnn still lingers. There are distractions from the drama with a full day of outdoor activities.

On last week’s episode the ladies were set to escape the city and venture into big sky country: Montana! After procuring a doctor’s note, Aviva opted out of the trip due to a sudden horse allergy and asthma condition that nobody was buying. The ladies hit the ground running in Montana, strapping on their designer boots and hats before heading out on a real-life cattle drive. Did you watch the last episode? If you missed the episode, don’t worry we have a full and detailed recap, right here for you.

On tonight’s episode The ladies are halfway into their Montana adventure and tension between Sonja and LuAnn still lingers. There are distractions from the drama with a full day of outdoor activities. The women become true City Slickers when they try their hand at fly fishing, skeet-shooting and repelling, but when it’s Kristen’s turn to descend down the mountain, things get tense. The ladies come together for a modern day treasure hunt called Geocaching, only to splinter apart again when a beer-lubricated Heather gets on Kristen’s last nerve. Old friends Kristen and Heather square off in the most unexpected tiff of the season.

The tension between LuAnn and Sonja isn’t going away. The rest of the ladies tried to move pass that first night by enjoying themselves on their trip. But the venue Kristen chose isn’t meant to keep grown women entertained. Take the activities they’re forced to do. Did Kristen really think fly-fishing would be enough for these socialites? Fly-fishing is cute for about a minute and a photo-op!

And the ladies are already complaining about being bored on the second day. Not to mention there isn’t a lot of guest services offered at the villas. Ramona was upset her bed wasn’t made by time she returned to the room and she hadn’t like seeing their food table still sitting outside from that morning. She sarcastically told her roommates to look out for bears and rats because of it.

Then at their second dinner – LuAnn and Sonja were at it again. It’s like a pattern for them. LuAnn continues to be mad Sonja never stood up for her with the facialist even though that was weeks ago. And Sonja refuses to see why LuAnn could be upset. In her mind LuAnn has everything she could possibly want so why let rumors get to you.

Is all of this simply a case of jealousy? LuAnn is hurt that Sonja is a better friend to Ramona. She feels like Sonja would have said something if it was Ramona being targeted by the rumor mill. As for Sonja, she truly can’t find it within herself to sympathize with someone that has more than she does.

So eventually the group does splinter off into two. Was that a conscious decision to keep the peace? Who knows! After the second blow-up, the ladies soon started to hang-out with their roommates more rather than be a part of the whole group. Heather, LuAnn, and Kristen went repelling and rest of the group went skeet-shooting.

However, their plans to avoid confrontation resulted in a new feud. Kristen felt she had something to prove to Heather when they went repelling. Heather is the sporty one and Kristen wanted to be seen as something more than a pretty face so she volunteered to go first. And yet she cried and freaked out all the way down the mountain.

It wasn’t until it was all over that Kristen realized she put her life in jeopardy just to prove a point with Heather. Then when Heather easily came down – it caused some jealousy or as LuAnn would say “cabin-fever”. Heather thought Kristen was being kind of whiny about all of it too. She didn’t get why Kristen wasn’t satisfied with her own accomplishments.

Making it down the mountain is a big deal so according to Heather stop crying about it!

Things came to head between them during geocaching. Geocaching is when the participants use navigational tools to go on a goose hunt really. And mostly everyone besides Kristen finds even the idea of it to be boring. Kristen though remains hopefully. She’s interested in geocaching and she wants to drum that up with everyone else.

But that’s hard to do with Heather constantly blowing it off. She starts in on “this is boring” and soon she talks the other girls into following her lead. Which felt like a total betrayal to Kristen. She’s known Heather the longest and she feels like the other woman is too controlling and bossy.

The moment they stopped doing what Heather wanted to do she called it quits. And that got Kristen upset enough to call Heather out on it. So now they’re fighting and LuAnn is stuck sharing a cabin with them!