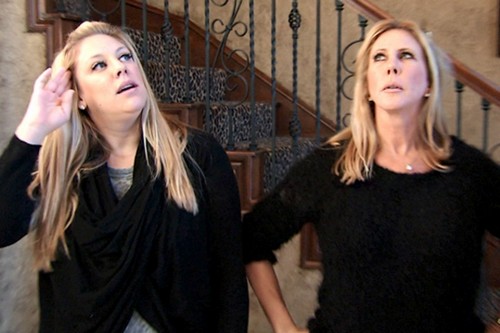 The Real Housewives of Orange County returns to Bravo tonight. On tonight’s episode called, “Choke-lahoma”, a trip to Oklahoma causes Vicki massive emotional stress as she helps her daughter Briana look for a house.

On the last episode Vicki continued to struggle with her daughter’s decision to move to Oklahoma as Briana asked her to come along on a house-hunting trip. Heather hosted her closest friends and family for a hoedown-themed breaking ground party for their new house.  Did you watch last week’s episode?  If you missed it we have a full and detailed recap, right here for you.

On tonight’s episode a trip to Oklahoma causes Vicki extreme emotional stress as she helps her daughter Briana look for a house. Back in Orange County, Heather and Shannon try to make sense of the massive rift in their friendship, leaving Lizzie caught in the crossfire of accusations and hearsay. Later, Tamra is shocked as she discovers that her son Ryan is possibly endangering his health by taking a potentially harmful medication without a prescription.

On tonight’s episode, the housewives appear to have something in common. Each of them were worried about their kids. Tamra’s son Ryan is back. And he’s attempting to convince his mother that the new medication he’s on was provided by a legitimate establishment this time. But his mom has been down this route once before so she’s not all that sure about the drugs he’s putting in his body. She took him to see her doctor. Nothing serious just a few tests.

As for Vicki, her daughter and grandson are moving. Yet that only became real to Vicki when she heard that they Brianna and her family were going to be looking at houses. For some reason the idea of her daughter moving to Oklahoma hadn’t been real till then.

And Vicki doesn’t like Oklahoma. She went out there with her family and all the way there – she tried to convince her son-in-law to leave the Marines. And things didn’t really improve from there. The first house they saw had a tornado shelter built inside. She didn’t even know tornadoes were such a big deal out there. So now every time she looks at a house – she wonders if it can keep her family safe during a tornado!

Though there is a turning point for Vicki. She soon caught on that its best to stay silent if there wasn’t anything nice to say. And because she was still trying to work that out – she asked the kids for their patience. It’s going to be a tough transition to always saying what’s on her mind to suddenly using tact.

Meanwhile back in sunny California, Heather and Lizzie had a play date with their kids. The kids weren’t on their best behavior and kept interrupting the adults’ conversation. But hey it’s not like it was all that stimulating. They were both complaining about the other housewives they had a problem with. Lizzie wanted to know how to survive Vicki and Heather needed to vent about Shannon. Heather still hasn’t gotten over Shannon’s alleged back-stabbing at her hoedown.

Lizzie was there as well. She met Shannon and the number one impression she took away was that Shannon was very nervous about her relationship with Heather. So she didn’t really get the dismissive attitude Heather was talking about.

In a weird coincidence, Heather and Shannon have a lot in common. They’re both high achievers and they mainly focus that abundance of energy on their families. Take this week – they were both obsessing over family photos. Everything had to be just right.

So why can’t these two ladies get along. Lizzie visited Shannon at her house and the two plus Danielle all enjoyed themselves with a makeup lesson. Lizzie seems to like Shannon and that’s why she wants the two people she’s been able to bond with to also like each other. She doesn’t want to end up in the middle and have someone eventually mad at her. Lizzie knows that’s how drama starts.

And with Shannon’s big Christmas party coming up – it would be best if Heather and Shannon cleared the air. Thankfully Heather was of the same opinion. She reached out to Shannon to arrange lunch.

The ladies greeted each other like old friends. They then made it the table in one piece and then they started talking. Shannon gave her point of view of their problems and when it came time for Heather to do the same; she accused Heather of twisting things. So Heather immediately felt that Shannon was being unfair. If she got her turn then why couldn’t Heather have the same?

Shannon has felt like Heather wants to boss her around and Heather feels like Shannon used her to meet the girls and then purposely chose to exclude her from their little club. Both of them deny the other’s accusations and because there “fight” wasn’t going anywhere – they agreed to keep it cordial. If another problems crops up then they’re going to talk it out.

Seems like they’re capable of being adults, but can there agreement last?