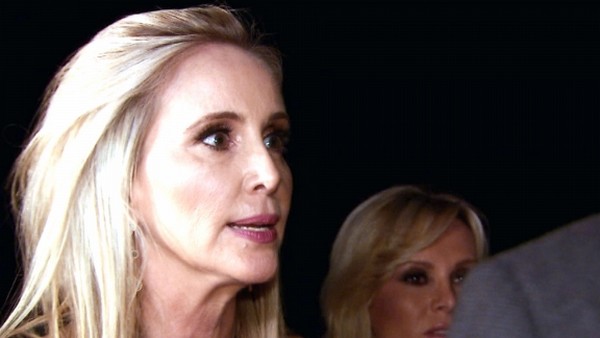 The Real Housewives of Orange County returns to Bravo tonight. On tonight’s episode called, “Point Break”, Lizzie invites a women to a dinner party at her family’s beach house, tensions are high as Shannon and Heather come face-to-face for the first time since Heather kicked Shannon out of her house.

On the last episode after a heated dinner in Mexico, Shannon and David tried to get the night and their marriage back on track with the help of Vicki. Back in the OC, Heather expanded her family with new puppies while Tamra and Eddie made a final decision about their new addition Astro. Meanwhile, Lizzie pounded the pavement and tried to take her business to the next level. Did you watch the last episode? If you missed it we have a full and detailed recap, right here for you.

On tonight’s episode when Lizzie invites the women to a dinner party at her family’s beach house, tensions are high as Shannon and Heather come face-to-face for the first time since Heather kicked Shannon out of her house. Vicki brings Brooks to the party in hopes for a clean slate for him and Tamra. After a fiery show on the beach, tempers flare once again when a big accusation is made.

Tonight’s episode of The Real Housewive’s of Orange County starts with Heather and Terry sitting down to dinner with Vicki and Brooks. Terry jokingly brings up the situation with Shannon being bounced from their home and it’s a downward spiral. Vicki starts off on Shannon’s side until Heather fills her in on the whole story about how she greeted Shannon with open arms at first. Meanwhile at David and Shannon’s house they seem to be getting along a tiny bit better. Shannon says that they have had 13 years of dysfunction but they are working on it. Shannon does praise David as a father. He is about to be a chaperone for their daughter Sophie’s trip to Italy.

Lizzie is the housewife with a fairly normal life. She is juggling little kids, work and renovations to her families old beach house. She says it’s stuck in the 90’s and wants to fix it up so that she can host dinner parties there. Her husband Christian whips the house into shape and it looks absolutely gorgeous and party ready. Lizzie is having all of the ladies and their men over so this dinner will likely turn into a mess. Heather, Shannon and Tamra all in one place isn’t going to go well. Shannon also claims that Tamra told her that Terry’s goal is to take her and David down.

Once they all arrive Heather is holding herself together on the outside but says she’s kind of a wreck on the inside. The fire dancers seem to divert attention for a little bit at least. As soon as Tamra walks in the door Shannon jumps on her and demands that she confirm that Terry wants to take her down. Tamra refuses and basically tells Shannon to take care of herself. During this talk Lizzie and Heather notice that Tamra came in the door smiling and now looks miserable.

Tamra tells Terry at the dinner table that Shannon thinks he wants to take her down. Terry’s reaction is huge and he erupts at the table. I have to admit it does seem crazy to accuse Terry of such a thing. David jumps in and tells Terry not to yell at his wife and it’s only downhill from there. The rest of the table seems to think that Tamra is stirring the pot. It’s interesting that every time things get heated Shannon makes a dash for it. Dashing in the other direction is Tamra and Heather.

Tamra insists to Heather that she was not talking badly about Terry but according to Vicki Tamra also told her that Terry wants to take down Shannon and David. Shannon seems like a lightening rod for drama. Back at the table Terry, who is always a nice guy, is as hostile as viewers’ of this show have ever seen him.  As usual Heather feels like the scapegoat and the whipping post for Shannon. David is making passive aggressive comments to everyone and finally it’s his turn to hit the balcony with Tamra. Tamra tells him exactly how things went down and gets Heather to add her two cents. Tamra and Heather spin a story that is pretty much what we have seen on camera but Shannon refuses to believe them. I think she prepares to look like an out of control, over-emotional lush. No matter who tries to reason with her it’s an epic fail. Shannon is traipsing through the house screaming like a total loon. Tune in next week for me RHOC.