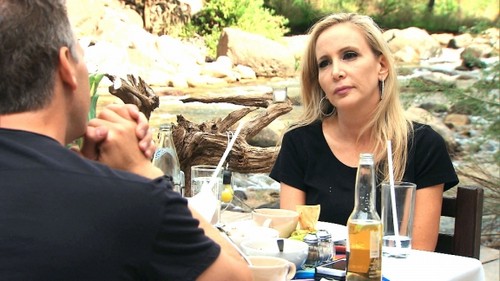 The Real Housewives of Orange County returns to Bravo tonight. On tonight’s episode called, “La-Bomba-ba”, after a heated dinner in Mexico, Shannon and David try to get the night and their marriage back on track with the help of Vicki.

On the last episode after being banished from the Dubrow household, Shannon made a run for the border to join Vicki and Brooks in Puerto Vallarta. Back in the OC, Lizzie’s personal life was put under the microscope as she tried to balance work and family, while Heather hired a personal chef to maximize her time with her husband and children. Meanwhile, Tamra’s experiment of trying to teach Eddie a lesson in fatherhood backfired leaving her the proud single mother of a robot baby. Did you watch the last episode? If you missed it we have a full and detailed recap, right here for you.

On tonight’s episode after a heated dinner in Mexico, Shannon and David try to get the night and their marriage back on track with the help of Vicki. Back in the OC, Heather expands her family with new puppies while Tamra and Eddie make a final decision about their new addition Astro. Meanwhile, Lizzie pounds the pavement and tries to take her business to the next level.

Have you been watching The Real Housewive’s of Orange County? If so are you finding it almost painful to watch Shannon and David’s marriage completely implode on camera? I mean the writing is so clearly on the wall for these two  and when she starts chiseling away at everything he does I’d imagine David wants to slit his own wrist with a butter knife. The couple has joined Vixki and Brooks for a trip to Mexico and at least they make Vicki and her man look like a beacon of stability in comparison. After a meltdown at dinner and Shannon dissecting David over what kind of Tequila he wants she then proceeds to dance on top of a bar. I have to admit, I’m shocked to see her do that.

I love how Heather appears to have it all together until you put her with her kids. Talk about chaos. She and Terry barely survived dinner with the family before the nanny took the kids out. Now Heather and Terry can discuss getting a dog. She originally wanted a rescue dog but now wants to make a donation and then get a pedigree.

Vicki arranges  for Shannon and David to go horseback riding and then for a private lunch. Unfortunately Shannon would rather take a nap then be forced to spend time with David alone. Meanwhile back in Santa Ana Lizzie is pitching her Sun Kitten line to a swimsuit store that sells the hottest stuff around. Her meeting seems to go well and she hopes they will buy her merch.

Shannon and David’s lunch is excruciating to watch and maybe one of the most real scenes on any of Bravo’s shows.  She starts babbling about how okay they are and he shoots everything down and states the obvious. Neither of them is happy and he is finished with the bull shit of being miserable. He tells her that if he made her happy then she would treat him better and that they need to start over by forgiving each other.

Tamra’s fake baby experiment was an epic fail. She and Eddie sent Astro back to the company they rented him from and according to the computerized results they were lousy parents. While Shannon and David have been on shaky ground in Mexico, Brooks and Vicki seem very happy together. They are also being very kind to the other couple and helping them to feel better about everything.

Shannon also has Vicki in her corner when it comes to Tamra blabbing about her marital problems. Vicki has learned the hard way with Tamra and she is upset for Shannon which really comes in handy when they all return to the OC and Tamra pays Vicki a visit at work. These two women  have so many issues that once a fire is lit it gets messy.  Tune in next week for more RHOC!