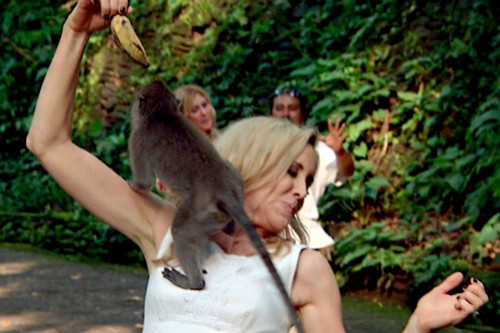 The Real Housewives of Orange County returns to Bravo tonight. On tonight’s episode called, “Eat, Pray, Run,” It’s more fish-out-of-water time for the ladies in Bali as everything seems to be more fun than a barrel of monkeys.

On the last episode Balinese bliss became a rumble in the jungle when the ladies set out on a trip to Bali. Heather and Shannon hope for peace and relaxation, but things escalate when Shannon got some shocking news. Meanwhile, Vicki heard about a scandalous statement allegedly made at the Valentine’s Day dinner and Lizzie revealed her true thoughts about Tamra. Did you watch last week’s episode? If you missed it we have a full and detailed recap, right here for you.

On tonight’s episode It’s more fish-out-of-water time for the ladies in Bali as everything seems to be more fun than a barrel of monkeys. However, beneath the surface, tensions escalate as Shannon and Lizzie compare notes and realize Tamra has poisoned their budding friendship. Then, Vicki is shocked when she hears allegations that Tamra has been talking trash about Brooks. Although Heather begins to see some hope for reconciliation between her and Shannon, everything comes to a head at dinner when the ladies confront Tamra about being two-faced.

Last week the ladies of RHOC all traveled to Bali to have a girls trip and it seemed like the conflict is just beginning. The day starts off with Tamra being ticked at Heather for calling her on crap. Tamra had made fun of Lizzie’s birthday dress then denied it and Heather reminded her that she did it. Tamra thought it was simply disloyal and slammed her for doing it. Heather basically tells her to get over it as they wait for the rest of the ladies to join them. Tamra, Heather and Vicki are in dresses but the others show up in work out clothes to tour temples.

Shannon seems to be invested in the Hindu culture while Tamra doesn’t get the appeal of the statues and rocks at all. The ladies move on to getting a fish manicure- in case you have never seen that they put their feet in the water and the fish literally eat the dead skin off. Shannon and Tamra spend the whole time screaming while Vicki bolts after just watching them. Now it’s onto the monkeys. They learn to feed the monkeys by holding the food over their heads as the monkeys climb up them, take the food and leave.

Shannon, Vicki and Lizzie are ready for a spa day. It’s a day in holistic heaven. I have to admit I like Shannon in Bali a lot. While they are relaxing Heather and Tamra decide to take a bike ride.  Heather hasn’t been on a bike in awhile and is having issues with balance.

Danielle and Lizzie take a dip in the pool and Shannon takes some time to tell Vicki everything that Tamra has been saying. Eventually all four of them sit down and talk before Tamra and Heather return. Lizzie shares more of the crap that Tamra has said and Danielle again expresses her remorse at bad mouthing Shannon. We get lots of clips of Tamra running her mouth and trash talking everyone. Vicki finally breaks down and cries because she realizes that Tamra isn’t her friend.

As the ladies are talking Tamra and Heather are exploring Bali and loving it. The all meet up again for dinner complete with chanting dancers. It’s their last night and Heather also likes “Vacation Shannon”. This chick is so much cooler than OC Shannon. Dinner suddenly gets really serious and Heather apologizes to Shannon for repeating private info about her marriage. These two may actually walk away on okay terms.

Unfortunately Tamra and Vicki aren’t going to come out of this night okay. Tamra goes to the bathroom and Vicki fills in Heather on how pissed off she is because Tamra is bashing Brooks again. Shannon goes in on Tamra first and Tamra is ticked that Lizzie threw her under the bus. Lizzie jumps in and it’s all downhill from there. Tamra doesn’t just leave she runs out of the restaurant. Heather is then told that Tamra minimized her being apart of her wedding Heather goes to talk to Tamra alone after she pulls herself together. Tamra wonders why Vicki doesn’t come and talk to her because she should know better than to believe everything. Tune in next week for the season finale of the RHOC!